JULY 7: Boucher has officially re-signed with the Raptors, the team announced (via Twitter). 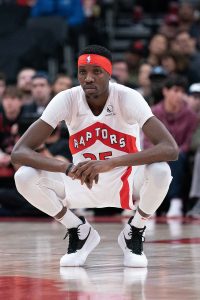 JUNE 30: The Raptors have agreed to bring back big man Chris Boucher on a three-year contract worth a reported $35.25MM, agent Sam Permut tells Adrian Wojnarowski of ESPN (Twitter link).

Toronto is using Boucher’s Bird rights to re-sign him to a deal worth a little more than the full mid-level exception. It’s a fully guaranteed deal, tweets Bobby Marks of ESPN.

Boucher is an athletic, energetic big man who can block shots and limited opponents to 43.9% shooting this past season. He’s an unusual player in a lot of ways, standing 6’9″ but weighing just 200 pounds. Although Boucher often plays center, he’s capable of switching across multiple positions on defense using his speed and 7’4″ wingspan.

Clearly, the Raptors value Boucher highly, despite his down shooting year and limitations (he has 116 career assists in 123 games). Yet those limitations haven’t been a hindrance, as the team been markedly better when he’s on the court over the last two seasons.