The hits keep coming for the NBA. While some good news has arrived regarding the health status of a handful of players, several more have been sidelined in the league’s coronavirus protocols. Here are the newest developments concerning which players have entered or exited the health and safety protocols:

Here are the latest developments regarding players entering or exiting the league’s health and safety protocols:

DECEMBER 17: Kings center Alex Len and two-way forward Louis King were also placed in the health and safety protocols on Thursday evening, as ESPN’s Adrian Wojnarowski tweets. The team now has five players in the protocols.

As we noted earlier, the Kings canceled practice on Thursday and closed their practice facility due to concerns about a COVID-19 outbreak. There is an expectation more positive tests will be revealed among both players and staff members.

Head coach Alvin Gentry, forward Marvin Bagley III, and guard Terence Davis all entered the protocols on Wednesday with indications both Gentry and Bagley have tested positive for COVID-19.

Fox is averaging 21.3 PPG and 5.0 APG this season. He scored 28 points against the Wizards on Wednesday when the Kings snapped a three-game losing streak and 29 against the Raptors on Monday.

As Tim Reynolds of The Associated Press tweets, approximately 7% of the league’s players are now under protocols.

There’s some concern that the team’s game vs. Memphis on Friday could be in jeopardy.

The Kings have had a relatively quiet 2021 offseason thus far, Zach Harper of The Athletic observes in a thorough recap of Sacramento’s transactions across every position. Sacramento shored up their big man depth behind Richaun Holmes, whom they re-signed to a reasonable four-year, $46.5MM deal. Sacramento also added Tristan Thompson via trade and brought back old friend Alex Len on a two-year agreement.

Harper notes that the Kings appear to have also improved on the lead guard front, having drafted Summer League co-MVP Davion Mitchell with the ninth selection out of Baylor. However, Harper opines that, thanks to the strength of several clubs at the top of the Western Conference, the Kings will be once again struggling to make the play-in tournament for the 2022 postseason.

Another item of interest is the long-term future of maximum-salaried Kings point guard De’Aaron Fox with the team, in the wake of 2021 All-Rookie first team guard Tyrese Haliburton and now Mitchell both flashing significant promise.

AUGUST 13: The Kings have announced the signing in a press release. 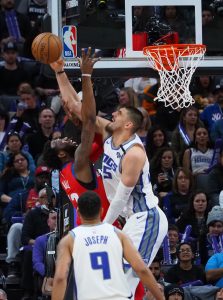 “It is great to welcome Alex back to the Kings,” GM Monte McNair said. “Alex will add toughness, competitiveness and experience while securing our front line depth.”

AUGUST 2: The Kings are set to sign journeyman free agent center Alex Len to a two-season contract, per Shams Charania of The Athletic (via Twitter). The two-year deal will be worth $7.65MM, tweets Michael Scotto of HoopsHype.

This will be Len’s second stint with Sacramento. He previously played on the Kings for a portion of the 2019/20 NBA season.

The fifth overall selection out of Maryland in 2013 by the Suns, Len also logged time with the Hawks. Atlanta eventually traded Len for his first tour of duty with the Kings.

Len, 28, most recently suited up for the Wizards for the majority of the 2020/21 season. After initially inking a one-year, $2.32MM deal with the Raptors in the 2020 offseason, Len fell out of the Toronto rotation quickly. The Raptors eventually waived Len. After clearing waivers, he then signed on with the Wizards for the rest of the season.

The seven-footer was able to carve out more rotation minutes at his next NBA stop, operating as a solid contributor to a playoff-bound club with Washington. For the balance of the 2020/21 season, Len averaged 6.6 PPG, 4.1 RPG, and 1.0 BPG across 15.3 MPG in 64 games, including 42 starts.

Throughout the season, Hoops Rumors takes a closer look at players who will be free agents or could become free agents this offseason. We examine if their stock is rising or falling due to performance and other factors. With the playoffs in full swing, we take a look at players from the Eastern Conference: 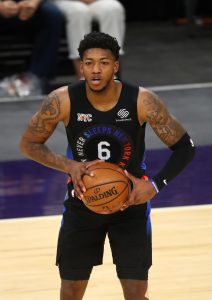 Payton’s postseason role was reduced to something rarely seen in any sport – the starting lineup cameo. He played a few ineffective minutes, then never returned to the court for two games until coach Tom Thibodeau completely gave up on him. Payton started regularly all season but his post-All-Star break woes drove Knicks fans nuts. They won’t have to worry about a repeat – Payton will be an unrestricted free agent. Payton has been a starter throughout his career but it’s hard to imagine him getting much more than the veteran’s minimum to fill out someone’s bench next season.

Fournier was the biggest acquisition the Celtics made at the trade deadline and they leaned on him heavily against the Nets with Jaylen Brown sidelined. Fournier averaged 15.4 PPG on 43.3% shooting from 3-point range in 33.4 MPG. Solid numbers, but he’s not the type of player who can carry a team. Fournier is expected to seek a contract similar to the one he signed with the Magic five seasons ago but is he really a $17MM a year player? There’s a general sense that Fournier may have to settle for the mid-level exception or something slightly above that figure.

Robinson pumped in 24 points in Game 1 against the Bucks, then petered out the rest of the series. That won’t hurt him in restricted free agency. The Heat have to make a lot of tough decisions this offseason – one of them will be how big an offer sheet they’d be willing to match to retain Robinson. First, they’ll have to extend a $4.7MM qualifying offer but that’s a formality. During last season’s playoff run to the Finals, Robinson averaged 11.7 PPG. He’s a career 42.3% 3-point shooter and he’ll be looking for a big payday after playing on a rookie contract.

Len has passed through a handful of organizations over the past four seasons. He’ll be on the move again as an unrestricted free agent. Len received 40 regular-season starts from the injury-depleted Wizards after getting waived by the Raptors. His playing time shrunk throughout the first-round series against Philadelphia – he played a grand total of three minutes in the last two games. Whether or not Thomas Bryant can effectively return from his knee injury next season, Washington needs to upgrade its frontcourt. It wouldn’t be a surprise if the Ukranian-born Len explores European options.

After eight years in the NBA, Wizards center Alex Len is finally ready for his playoff debut, writes Chase Hughes of NBC Sports Washington. Len has the longest active streak with no postseason appearances, and it’s a distinction that he’s eager to get rid of.

“The play-ins kind of felt like the playoffs,” he said. “Every possession counts. You could feel the intensity was way higher than the regular season. It’s just probably the most exciting part of my career.”

It didn’t look like Len was headed to the playoffs when he arrived in D.C. in January. The Wizards were far out of the race when they claimed him off waivers after he had been cut loose by the Raptors. He turned out to be a valuable addition in the wake of a season-ending injury to starting center Thomas Bryant.

“When I came here, it was probably at the bottom or the second-worst team in the East,” Len said. “Then, climbing all the way back and making the eighth seed, it was a lot of fun. We battled through and guys stuck together.”

There’s more on the Wizards:

Hawks swingman Bogdan Bogdanovic has progressed his rehabilitation to include one-on-one play with contact, the team tweets. Bogdanovic hasn’t played since January 9 due to an avulsion fracture in his right knee. His next step will be reintegration into team practice. Bogdanovic was one of the premier acquisitions of the offseason, signing a four-year, $72MM offer sheet that the Kings declined to match.

The Heat may not be without star swingman Jimmy Butler for much longer. According to Barry Jackson of The Miami Herald, the expectation is that Butler – who hasn’t played since January 9 – will clear the NBA’s health and safety protocols on Monday.

The Heat will be in action tonight in Brooklyn, but Butler will need a little more time to get his conditioning back up to speed and to pass a cardiac screening before he’s cleared to play in a game. Jackson says there’s optimism that Butler will be able to return later this week and that the same is true of Avery Bradley, who has also been in the league’s COVID-19 protocols for over two weeks.