Brian Roberts To Play In Greece

JULY 25: According to international basketball journalist David Pick (Twitter link), Roberts’ deal is worth $950K in year one and $1MM in year two, with an NBA out in between. That opt-out comes when we expected, but the value of the deal is smaller than previously reported.

According to Michael Scotto of Basketball Insiders, Roberts’ new two-year deal will be worth $4MM, and will also include an NBA opt-out. While Scotto doesn’t specify the details on that opt-out clause, I’d expect Roberts would have the opportunity to return to the NBA next offseason, following the first year of the deal.

Roberts, who played his college ball at Dayton, made his NBA debut in 2012 and has spent the last several seasons with New Orleans, Charlotte, and Portland. In 2016/17, he appeared in 41 games for the Hornets, but saw limited minutes, averaging 3.5 PPG and 1.3 APG.

The Hornets, who had been seeking a reliable backup for Kemba Walker, tried Roberts and Ramon Sessions there last season, but both players were free agents this summer and it appears neither will return. Sessions remains on the market, but Charlotte signed Michael Carter-Williams to be Walker’s new backup.

Meanwhile, Roberts will have the opportunity to play a larger role overseas next year for Olympiacos, and will also get a pay raise after earning the minimum in Charlotte. His new Greek club earned a spot in the EuroLeague Final Four in 2016/17, falling in the championship game to Turkish team Fenerbahce.

Eight of the 12 players who played with Team USA during the 2012 Summer Olympics in London have since changed teams, Tom Haberstroh of ESPN writes. Seven of them either immediately or eventually reunited with a teammate from the same Dream Team squad.

The scribe has published a full feature detailing the impact that international teams have on superteams in the NBA, referring to playing internationally as a form of modern team-building.

The article, of course, touches on the fact that yet another player from that same team – Carmelo Anthony – could be on the move to reunite with Olympic teammates before the end of the summer.

Additionally, Haberstroh points out that five of the players from the 2016 Olympic squad can be free agents next summer. Could more reunions be in the cards?

That’s not all from around the NBA:

Brian Roberts will return to the Hornets as a reserve point guard, tweets Rick Bonnell of The Charlotte Observer. The 30-year-old will receive a veteran’s minimum contract.

Roberts spent a season and a half in Charlotte before being traded twice in February. The Hornets sent him to the Heat on February 16th in a three-team deal that brought back Courtney Lee, and Miami shipped him to the Blazers in a cap-clearing move two days later.

Roberts appeared in 30 games last season with the Hornets, averaging 4.8 points and 1.3 assists in 11.1 minutes per night. His playing time was cut almost in half in Portland, and his per-game averages dropped to 2.9 points and 0.8 assists.

Suns interim head coach Earl Watson has no qualms about pairing up centers Alex Len and Tyson Chandler in the starting lineup, according to Paul Coro of the Arizona Republic. Watson wants to utilize Len as the team’s primary offensive target the rest of the season and foster his development, Coro continues. “Who’s playing two 7-footers any more?”  Watson explained to Coro. “We have this trend of playing small ball and we know the greatest small ball team is the Warriors. We’re not going to catch them. Let’s create a new trend. Let’s let Alex Len get experience.”

In other developments around the Western Conference:

Thunder GM Sam Presti referred to the trade with Denver that netted the team Randy Foye, as well as saved the team approximately $9.8MM in cap commitments, as “smart business,” Anthony Slater of The Oklahoman relays (Twitter link). “The roster spot clearly gives us some flexibility to survey other opportunities to improve,” Presti said. “Then financially, that obviously wasn’t the intent of the deal, but because of the presence of Dakari Johnson, Semaj Christon and Alex Abrines in the drafts that we’ve had previously, we feel pretty good about those guys. So the draft choices in this particular draft were more valuable to Denver. And the money that we were able to save, the way that we’ve operated here, that allows us to reinvest in the team and clearly our team is going to become more and more expensive.”

5:19pm: The Heat traded Brian Roberts and Miami’s unprotected 2021 second-round pick to the Trail Blazers for cash, the teams announced. The move takes the Heat beneath the luxury tax threshold, according to Wojnarowski (on Twitter), and averts the repeat-offender tax penalties the team had been facing,

Miami progressively shed salary throughout the season, dealing Shabazz Napier, Zoran Dragic, Mario Chalmers, James Ennis, Chris Andersen and finally Jarnell Stokes and Roberts in separate deadline-day deals to avoid becoming the first NBA team hit with the repeater tax, which starts at a rate of $2.50 for every dollar spent. The tax isn’t calculated until the final day of the regular season, and the Heat are only about $1MM shy of the $84.74MM threshold, so they could still add enough salary to again cross it. That’s an unlikely proposition given their months-long efforts, however.

The Heat gain a trade exception worth Roberts’ $2,854,940 salary. It’s the second time the point guard has been traded this week, as he went from the Hornets to the Heat in Tuesday’s three-team Courtney Lee trade. The contract for the 30-year-old Roberts expires at season’s end, and he’ll surely hope for more opportunity to showcase himself for free agency than he saw in Charlotte. His 4.8 points, 1.3 assists and 11.1 minutes per game are all career lows for the fourth-year veteran. Blazers GM Neil Olshey hinted in the team’s press release that Roberts will get a chance to contribute in Portland.

“Brian is an experienced player and a quality person,” Olshey said. “He has a skill set we value and fills a positional need as we head into a critical time in the season.”

Roberts went into Portland’s open roster spot and the team’s ample cap space. Miami’s deadline moves, including the Stokes trade, leave the Heat with the regular-season minimum of 13 players.

Adrian Wojnarowski of The Vertical on Yahoo Sports first reported the trade (Twitter link). Ira Winderman of the Sun Sentinel identified the second-round pick going to Portland as a 2021 selection (link to Twitter). RealGM confirms the pick is Miami’s own and carries no protection.

The acquisition of Brandon Jennings in Tuesday’s trade with the Pistons doesn’t mean the Magic have wavered in their belief in Elfrid Payton, GM Rob Hennigan said, though coach Scott Skiles has been looking for more lately from Orlando’s incumbent starting point guard, notes Brian Schmitz of the Orlando Sentinel. Still, the trade was about creating flexibility to chase stars in the summer, as Schmitz sees it, suggesting Jennings and Ilyasova will merely be rentals if the right marquee player comes calling. The deal reduced the Magic’s guaranteed salary commitments by $16.8MM for next season, bringing their total down to $44MM. See more from Orlando amid news out of the Southeast Division, where three teams have made trades within the last 24 hours: 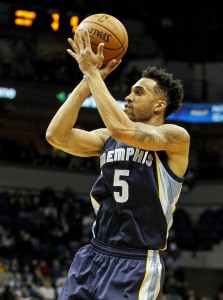 6:45pm: Courtney Lee is headed to Charlotte as part of a three-team deal involving the Grizzlies, Heat and Hornets, all of whom have officially announced the trade that Adrian Wojnarowski of Yahoo Sports originally reported. The Heat pick up Brian Roberts in the deal, while Lee is the only asset going to the Hornets, but the Grizzlies come away with two players and four second-round picks.

“We are excited to be adding a quality veteran wing player to our roster in Courtney Lee,” Charlotte GM Rich Cho said in his team’s press release. “Courtney has proven to be a team defender, a consistent outside shooter and a solid scorer in our league for the past eight years.  Particularly in terms of experience, he adds depth to our roster in a position of need for us and we expect him to fit in to our system and contribute right away.”

The Memphis-bound Hairston had started on the wing for Charlotte in place of Kidd-Gilchrist while he dealt with an earlier shoulder injury that kept him out for the season’s first few months, so presumably Lee will slide into that spot alongside soon-to-be free agent Nicolas Batum. All four players involved are on expiring contracts, with Lee’s worth $5.675MM, Anderson making $5MM, Roberts getting close to $2.854MM and Hairston seeing more than $1.201MM. The Grizzlies won’t be able to re-sign Hairston to a deal with a starting salary of more than $1,253,160 for next season because the Hornets declined the team option they had for next year on his rookie scale contract.

Memphis, Charlotte and Miami are all dealing with significant health issues, too. Marc Gasol has a broken foot, while Michael Kidd-Gilchrist is out for the season with a torn labrum in his shoulder, and mystery surrounds the status of Chris Bosh as he deals with another blood clot. Miami is also missing Tyler Johnson until at least April, if not the rest of the season.

The Grizzlies had reportedly been testing the market for Lee, though they apparently rejected a proposal from the Timberwolves of Lee for Kevin Martin several weeks ago, before Gasol went down. Andersen had been a trade candidate for months, with the latest dispatch indicating that Miami was aggressively trying to trade him as repeat-offender tax penalties loom. The trade as reported lowers the Heat’s payroll by about $2.1MM, but Miami would still need to trim roughly another $3.4MM to sneak under the tax line.

The Celtics offered the Hornets a package that included four first-round picks to entice Charlotte to give up the No. 9 pick last month, sources tell Grantland’s Zach Lowe. Boston was willing to give up its own pick at No. 16, the No. 15 pick that they would tentatively have acquired from the Hawks, an unprotected future first-round pick from the Nets (presumably the 2018 pick Brooklyn owes Boston) and a future first-rounder from either the Grizzlies or the Timberwolves (presumably the ones those teams already owe Boston), as Lowe details. Some front office members in Charlotte liked the idea, but owner Michael Jordan preferred to roll with Frank Kaminsky, whom the Hornets took at No. 9, several sources said to Lowe. The Grantland scribe delves into the implications of that choice, and he touches on more, too, as we highlight amid the latest from the Queen City:

Hassan Whiteside is finally getting an opportunity to prove that he is an NBA-caliber player after toiling away overseas and in the D-League, Steve Aschburner of NBA.com writes. When asked how he feels about getting his chance to play for the Heat, Whiteside said, “It’s a blessing, you know. I told my teammates, man, you won’t believe how things work out in life. Three months ago, you can ask anybody in Charlotte at the downtown [YMCA], I was just there. At the downtown Y, just chillin’. Workin’ on my game. I couldn’t even get a team to pick up the phone.”