The Lakers are expected to bring Russell Westbrook off the bench when he returns to action following a hamstring-related absence, allowing him to be the primary play-maker for the team’s second unit, reports ESPN’s Adrian Wojnarowski (via Twitter).

Westbrook, who missed Wednesday’s game in Denver, was originally listed as questionable for Friday’s contest in Minnesota, but has since been upgraded to probable, tweets Kyle Goon of the Southern California News Group.

Anthony Davis continues to be listed as questionable for Friday due to low back tightness and is considered a game-time decision. If Davis misses the game, that could keep Westbrook in the starting lineup, Wojnarowski notes (via Twitter).

However, Davis did participate in the Lakers’ Friday shootaround. According to Dave McMenamin of ESPN (Twitter link), the team used a starting five of Davis, LeBron James, Patrick Beverley, Lonnie Walker, and Damian Jones during that shootaround.

The Lakers attempted to bring Westbrook off the bench in their preseason finale two weeks ago, but the experiment lasted just five minutes before he left the game due to a hamstring injury. The former MVP later said that he thought not being in the starting lineup was a factor in his injury, since he didn’t have the same pregame routine he has grown accustomed to.

Still, it sounds like the Lakers and head coach Darvin Ham still believe the idea of Westbrook joining the second unit has merit. Even if it doesn’t happen on Friday, it appears L.A. will try it again sooner or later — if it works, the team intends to stick with it for the foreseeable future, per Wojnarowski (Twitter link).

John Hollinger of The Athletic previews the Clippers for the 2022/23 season, writing that with the league’s deepest roster and stars Kawhi Leonard and Paul George back and healthy, they should be among the best teams in the league. Hollinger predicts the Clippers will go 54-28 and finish as the No. 1 seed in the West, but thinks the Warriors have a better shot of making the NBA Finals.

There are a couple of question marks on the roster, even though it’s very deep, especially on the wing. According to Hollinger, the Clips need either John Wall and/or Norman Powell to step up and be a “third star” to complement Leonard and George, with shot creation and getting to the free throw line top priorities.

The other weakness of the roster is center, with only Ivica Zubac as a true five on the 15-man roster. Hollinger thinks it might be a tall order to have Robert Covington play full-time backup center in the regular season, and wonders if the team might use its last standard roster spot on a traditional center.

Last year’s disappointment for the Lakers began with an 0-6 preseason, and new coach Darvin Ham wants his team to be focused from the start, according to Jovan Buha of The Athletic. Anthony Davis agrees, citing the need to quickly build continuity after an offseason filled with change.

“I think our team got put together a little later than most teams,” Davis said. “New coach. New system. So we’re kind of behind the eight ball, and we’re trying to speed that process up by doing it the right way. Not by skipping steps. And we’ve been doing that. We’ve been having competitive practices, getting up and down. We’re locking in on our stations on offense and defense, and it’s been good.”

Although Ham wants to start winning right away, he hasn’t decided if Davis, LeBron James and Russell Westbrook will play against the Kings in Monday’s preseason opener.

“I mean, if possible, yeah,” Ham said when asked about their status. “We’re gonna sit down (Sunday) as a staff and talk about what the rotation is gonna look like on Monday. But definitely. Definitely.”

While it’s still early in training camp, Lakers first-year coach Darvin Ham revealed a surprise starting lineup he’s been using in practices, Jovan Buha of The Athletic tweets. The group around Anthony Davis and LeBron James includes Russell Westbrook, Damian Jones and Kendrick Nunn. Westbrook has heard his name mentioned often in trade rumors, Jones has never been a regular starter in the league, and Nunn missed all of last season due to injury.

James plans to play more often this preseason, when he only saw action in two games, according to ESPN’s Dave McMenamin.

We have more from the California teams:

The Warriors only have 11 players on standard contracts so far, leaving at least three openings on their projected regular season roster. According to Anthony Slater of The Athletic, it’s possible one of those spots will be filled by Andre Iguodala.

Second-round pick Ryan Rollins also appears likely to claim one of the 15-man roster spots. He has a stress fracture in his foot, but Slater says there’s a belief he should be ready to go by training camp and he’ll likely receive a standard contract rather than a two-way deal.

Quinndary Weatherspoon, who received a two-way qualifying offer from the Warriors, is another player to watch, according to Slater, though he says the team’s preference would be to keep Weatherspoon on a two-way contract rather than a standard deal.

The Lakers have officially completed three signings, according to a team press release. The trio of players are center Damian Jones, wing Troy Brown and wing Juan Toscano-Anderson.

Jones, Brown and Toscano-Anderson were all signed to minimum-salary contracts. Both Brown and JTA received one-year deals, while Jones got a two-year deal with a player option.

Brown, 22, was the 15th pick of the 2018 draft and spent his first two-plus seasons with Washington before being traded to Chicago last year. The Bulls declined his qualifying offer after he struggled to make an impact this season, averaging 4.3 PPG and 3.1 RPG on .419/.353/.769 shooting in 66 games (16 MPG).

Because the three players are on minimum contracts, the deals can be completed before the transaction moratorium ends on July 6.

The Lakers are signing Lonnie Walker to a one-year, $6.5MM deal, Damian Jones to a two-year, minimum-salary deal with a player option, and Troy Brown Jr. to a minimum deal, according reports from Shams Charania of The Athletic and Adrian Wojnarowski of ESPN (All Twitter links here). Brown’s contract is for one year, tweets Dave McMenamin of ESPN. 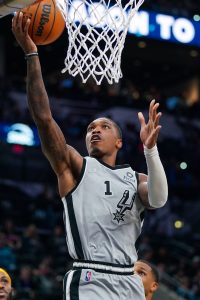 Walker, 23, was the 18th pick of the 2018 draft and spent his first four seasons with the Spurs. He’s a very athletic guard and has shown glimpses of potential, but struggled with efficiency last season (.407/.314/.784 shooting line).

In 70 games (23 MPG) with San Antonio last season, Walker averaged 12.1 PPG, 2.6 RPG and 2.2 APG. The Spurs decided to withdraw his qualifying offer just before free agency opened, making him unrestricted and free to sign with any team. The move wasn’t very surprising considering the Spurs were better with him off the court (+2.1 net rating) than on it (-3.0), so he’ll be looking to build up his value in Los Angeles after an up-and-down tenure in San Antonio.

After being drafted 30th overall in 2016 by the Warriors, Jones spent his first three seasons with Golden State but struggled to find a consistent role. He’s long and athletic, but was raw coming out of college. He made stops in Atlanta, Phoenix and L.A. from 2019-21 before landing with Sacramento, where he developed into a solid backup center.

Brown, 22, was the 15th pick of the 2018 draft and spent his first two-plus seasons with Washington before being traded to Chicago last year. The Bulls declined his qualifying offer after he struggled to make an impact this season, averaging 4.3 PPG and 3.1 RPG on .419/.353/.769 shooting in 66 games (16 MPG).

By using the taxpayer mid-level exception to sign Walker, the Lakers will be limited to a minimum contract for Max Christie, whom the team selected with the 35th pick of the draft last week. Christie’s deal will be limited to two years, as ESPN’s Bobby Marks relays (via Twitter).

Alvin Gentry will likely coach his final game with the Kings today, but he didn’t want to talk about his future Saturday night, writes Jason Anderson of The Sacramento Bee. In a pre-game meeting with reporters, Gentry brushed aside the topic when asked if he wants to remain with the organization beyond this season.

Gentry, who started the season as the team’s associate head coach, was promoted to interim coach in November when Sacramento decided to fire Luke Walton 17 games into the season. Gentry was previously able to remain as head coach of the Pistons and Suns after taking over those teams on an interim basis, but it doesn’t appear that will happen with the Kings, who are reportedly looking at established names such as Mike D’Antoni and Terry Stotts, among others.

Mavericks big man Kristaps Porzingis has cleared the league’s health and safety protocols and is listed as a probable starter on Saturday. However, it’s not certain he will play, since Dallas has always been cautious regarding Porzingis’ health and he hasn’t practiced for a couple of weeks, Brad Townsend of the Dallas Morning News notes (Twitter links). Porzingis, who is averaging 20.6 PPG and 8.0 RPG, hasn’t played since New Year’s Eve.

We have more COVID-19 related news: