After a remarkable 2021 postseason run that saw them reach the Eastern Conference Finals, the Hawks have staggered out of the gate in 2021/22. The team is off to a 16-20 start and currently occupies the conference’s No. 12 seed. Chris Kirschner and John Hollinger of The Athletic discuss several potential trades for Atlanta. Kirschner and Hollinger identify a defensive upgrade on the wing as the ideal priority for the club.

Hollinger pinpoints the expiring mid-sized deals of Lou Williams, Gorgui Dieng and Delon Wright, as well as intriguing young players such as Cam Reddish, Onyeka Okongwu and Jalen Johnson, as possible trade chips that team president Travis Schlenk could look to move. Kirschner considers the Pacers and Celtics to be amenable to making deals that could suit the Hawks’ needs.

The Hawks would be open to offloading some of their depth to add a high-impact player in a two-for-one deal, writes Sam Amick of The Athletic in another piece. Amick suggests that forwards Danilo Gallinari and Reddish may be the most likely players to be moved.

6:11pm: The Magic have re-signed both Gillespie and Frazier to their second 10-day contracts via a hardship exception, the team’s PR department tweets. Frazier has averaged 4.6 PPG, 1.8 RPG, and 3.4 APG in five games with the club (20 MPG).

7:02am: The Magic intend to sign Freddie Gillespie to a second 10-day contract using a hardship exception, our JD Shaw reports (via Twitter). Gillespie’s first 10-day deal with the club expired overnight.

The Magic’s COVID situation remains fluid — the team still has five players in the health and safety protocols, but one (Mychal Mulder) entered the protocols on December 22 and another (Mohamed Bamba) went in on Dec. 17, so hopefully they’ll be cleared soon.

There are currently two players – Hassani Gravett and Admiral Schofield – on active 10-day deals with the Magic. Gabe York reportedly reached an agreement to sign with the club, but it hasn’t been finalized yet. Tim Frazier‘s 10-day hardship contract, like Gillespie’s, expired overnight.

DECEMBER 21: The Magic have officially signed Gillespie to his 10-day deal and also announced that veteran guard Tim Frazier has been added on a 10-day contract of his own. Hardship exceptions were used to complete both moves.

DECEMBER 19: The Magic are planning to sign big man Freddie Gillespie to a 10-day contract, according to Shams Charania of The Athletic (Twitter link). Orlando will use a hardship exception to sign him.

Gillespie has been playing with the Grizzlies’ G League affiliate, averaging 11.4 points, 12.5 rebounds and 2.8 blocks per game. This is his second straight G League campaign with Memphis.

Gillespie also played 20 games with the Raptors last year, but he was waived this past fall. The 24-year-old went undrafted in 2020 after playing for Carleton and Baylor.

The Mavericks’ Jason Kidd calls himself a “different coach” than the one who flamed out in Brooklyn and Milwaukee, Joe Vardon of The Athletic writes. Kidd says he’s more relaxed and a better communicator than he was in his previous stops. He also knows a big part of his current job is to get the best out of franchise player Luka Doncic.

“I think there’s trust and respect from Day 1, because I played that position,” Kidd said. “I am not as good as he is, but I can help him. My job is to help him. He’s 22 years old, he has been a pro for a long time, but again I am trying to make the game as easy as possible for him.”

The Raptors have made a pair of roster cuts, announcing today in a press release that they’ve waived big men Freddie Gillespie and Reggie Perry.

Because Gillespie’s contract wasn’t fully guaranteed beyond the 2020/21 season, the Raptors will only be on the hook for his modest partial guarantee ($50K).

Perry initially received a qualifying offer, but didn’t accept it, and Brooklyn ultimately took it off the table in mid-August, making the forward/center an unrestricted free agent.

The Raptors will still need to make at least one more cut before opening night next week, since four players – Yuta Watanabe, Sam Dekker, Isaac Bonga, and Ishmail Wainright – remain in the mix for three spots on the 15-man roster. Watanabe is considered a good bet to make the team, so the other players three may be competing for two spots, assuming Toronto carries a full 15-man squad into the regular season.

Despite dealing with a calf strain, Yuta Watanabe is a safe bet to make the Raptors’ opening-night roster, according to Blake Murphy of Sportsnet.ca. Watanabe is a multi-position defender and the coaching staff is looking for him to play a bigger offensive role. His partially guaranteed contract becomes fully guaranteed if he’s on the 15-man after training camp.

The Raptors have 12 players with guaranteed contracts and five others with non-guaranteed or partially guaranteed deals. Eric Koreen of The Athletic speculates on who might grab the remaining roster openings, with Yuta Watanabe and Freddie Gillespie most likely to nail down spots. That would leave Sam Dekker, Ishmail Wainright and Isaac Bonga in a battle for the final spot, unless Toronto chooses to carry 14 players on the regular roster.

We have more on the Atlantic Division:

With the signing of Sviatoslav Mykhailiuk, the battles for the Raptors’ final roster spots are coming into focus, Blake Murphy of The Athletic tweets.

Murphy writes that the player option included in Mykhailiuk’s deal makes it very likely he gets one of the team’s final roster spots, especially given Toronto’s lack of guaranteed depth at the shooting guard spot. Second-round pick David Johnson and partially-guaranteed Ishmail Wainright are the only shooting guards on the roster beyond Gary Trent Jr. Fred VanVleet has seen plenty of time at the position in recent years, but is almost certainly going to start games as the team’s point guard.

Murphy adds that if Mykhailiuk is guaranteed a spot on the 15-man roster, that means that Wainright, Freddie Gillespie, Sam Dekker, Isaac Bonga, and Yuta Watanabe will vie for the final three openings. Gillespie and Watanabe both showed promise for the Raptors in limited time last season, while Bonga has at times proved an interesting, potential-filled player as a 6’9″ playmaker with decent defensive instincts and some shooting ability.

Murphy added in a response to his initial tweet that Watanabe is considered a heavy favorite for a spot after his strong play last season, but given his non-guaranteed contract, he’s not quite a lock. Murphy also says that Egyptian big man Anas Mahmoud is likely to receive an Exhibit 10 deal.

In a final tweet, Murphy adds that the Raptors are operating like a team that knows that it’ll be able to move Goran Dragic by the deadline to avoid a tax bill.

Recent Knicks lottery picks Kevin Knox and Frank Ntilikina appear to be fully out of New York’s rotation when it comes to logging meaningful minutes, writes Marc Berman of the New York Post. The downside of head coach Tom Thibodeau barely using either player, even in light of swingman Alec Burks‘s recent coronavirus-mandated absence, is that neither man has been able to showcase much on-court value to garner much trade traction this offseason.

Despite the players’ limited in-game exposure, teammates have applauded their preparedness. “One thing about those guys is they’re coming in every day, they’re one of the first guys in the gym,’’ Knicks bench big man Taj Gibson said of the two former lottery picks. “At night, when I come back in at night, they’re one of the first faces I see in the gym at night. They’re always ready. They do whatever the team needs.”

“They work extremely hard,” applauded Knicks forward RJ Barrett. “I just saw Kevin out there on the court dripping in sweat getting the work in. When they’ve gotten their opportunity they’ve done extremely well.’’

10:54am: The Raptors have officially signed Gillespie, the team announced in a press release. 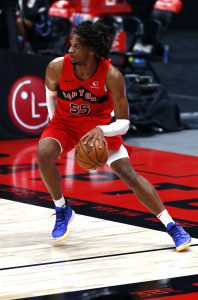 According to Blake Murphy of The Athletic (Twitter link), next season’s salary is non-guaranteed. It has a $50K partial guarantee trigger date at some point, then would become fully guaranteed if Gillespie makes the regular season roster.

8:33am: The Raptors are set to sign big man Freddie Gillespie to a new contract after his second 10-day deal expired on Tuesday night, according to Shams Charania and Blake Murphy of The Athletic (Twitter link). Gillespie will receive a two-year contract from Toronto, per The Athletic’s duo.

Gillespie, who has appeared in 10 games for the Raptors this month, has made a strong impression both on and off the court during his first 20 days with the club. He averaged 5.3 points, 3.6 rebounds, and 1.0 block per game in 16.0 minutes per contest, racking up five blocked shots in just 14 minutes of action during Monday’s victory over Cleveland.

Last offseason, the Raptors re-signed Chris Boucher and added Aron Baynes and Alex Len to shore up a frontcourt rotation that no longer included Serge Ibaka and Marc Gasol. However, Len was waived early in the season, Baynes is no longer in the rotation, and Boucher is injured, leaving Gillespie as the team’s current backup center behind another recent addition, Khem Birch.

Because the Raptors used their full mid-level exception to sign Baynes and Len and don’t have a bi-annual exception available this season, they’re limited to the minimum salary exception on Gillespie, meaning they couldn’t have offered him more than two years or more than the rookie minimum.

The Raptors will have a full 15-man roster once they officially re-add Gillespie. The club does still have an open two-way contract slot that could be filled before the end of the regular season.

For more on Gillespie’s unorthodox journey to the NBA, be sure to read our feature on the former Baylor standout from earlier this year.