AUGUST 6: The Raptors have made it official with Birch, formally issuing a press release to confirm his new deal. 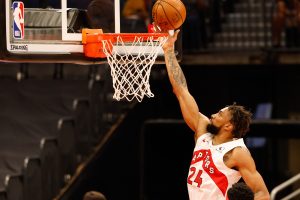 AUGUST 5: The Raptors have reached a three-year contract agreement with one of their own free agents, center Khem Birch, Adrian Wojnarowski of ESPN tweets.

The deal will be worth $20MM. Toronto only held Non-Bird rights on Birch, so it will likely use part of its mid-level exception to re-sign Birch. It’s also conceivable that the Raptors could open up sufficient cap room to make it happen, but if they take back Goran Dragic or another high-salary player in the Kyle Lowry sign-and-trade with Miami, they’ll need to use the mid-level.

Birch joined the Raptors in April after the rebuilding Magic bought him out. He started 17 of 19 regular-season appearances with the Raptors, averaging 11.9 PPG, 7.6 RPG and 1.2 BPG in 30.4 MPG. The 28-year-old Birch played his first three-and-a-half NBA seasons with Orlando but was mainly used off the bench.

The Raptors waived Aron Baynes on Wednesday, so Birch could compete with Chris Boucher for a starting role with the club.