Celtics assistant coach Damon Stoudamire said he frequently checks in with suspended coach Ime Udoka, whom he’s known for 30 years. Stoudamire has tried to give him advice and keep his spirits high, Adam Himmelsbach of the Boston Globe reports.

“I think that everything that happens to you, when it hits you like this it can really get overwhelming,” Stoudamire said. “So that’s what I check on him about. I check on him to make sure he’s doing all right, and make sure his son is good, and that he’s able to find some type of peace within what he has going on. As a human being when you do something, you beat yourself down. And with the success that we’re having now, it’s human nature, man. You’re sitting there; you’re watching [the team]. I just think the biggest thing is that he’s able to, in his own way, come to some kind of resolution and peace in his mind so he can move forward.”

The Celtics continue to hope their coaching situation resolves itself with Ime Udoka landing another job, but a rival general manager tells Steve Bullpett of Heavy that may not be likely. Although Boston is expected to keep Joe Mazzulla in place beyond this season, he’s still technically the interim coach. Udoka’s suspension for an inappropriate relationship with a subordinate will expire June 30, and the team may have to negotiate a settlement to keep both Udoka and Mazzulla happy.

The problem appeared to be solved when Udoka emerged as the frontrunner for the Nets’ job after they parted ways with Steve Nash in November. But Brooklyn officials changed their minds about hiring Udoka, which the GM believes may reflect the opinion around the league.

“There’s still a lot of question about all that went on with him, but even just the fact that he didn’t fight the suspension says something,” the GM said. “From a team standpoint, it’s hard to bring him in right now. You’ve got women on your staff that could have a problem with it, and there’s the public. … Just the social media climate would bring a lot of criticism.”

There’s more on the Celtics:

Knicks forward Obi Toppin is still in the early stages of rehab from his right leg injury, according to Stefan Bondy of the New York Daily News.

Toppin, who has not played since Dec. 7, said his workouts are limited to spot-up shooting, pool work and upper-body weightlifting. The Knicks’ primary backup to Julius Randle will need “couple more reevaluations” before returning from the fractured bone in his leg.

“Not really any pain, but I could not feel pain and it could still be messed up,” Toppin said. “So it’s all up to [the Knicks’ medical staff]. Whenever they feel I should be back, that’s when I’ll come back.”

After being hit with 12 technical fouls and $130K in fines last season, Knicks forward Julius Randle came into 2022/23 hoping to keep his temper in check and to not be at odds with the referees nearly as often, writes Stefan Bondy of The New York Daily News.

Randle, who made a bet with a member of the Knicks organization that he wouldn’t get more than three technical fouls this season, received a pair on Sunday to push his season total to four. He referred to Sunday’s game as a “relapse” and said it was “selfish” of him to get those two techs that resulted in his ejection.

“Hopefully, that last one gets rescinded,” Randle said, per Bondy. “… I’m really trying my best. Sometimes my emotions get the best of me. But that’s just kind of what comes with it.”

Al Horford gave the Celtics a “hometown discount” by signing a two-year extension this week valued at $20MM, an Eastern Conference executive tells Sean Deveney of Heavy. The executive believes Horford could have received more money if he had waited for free agency, but at age 36 he wasn’t interested in leaving Boston for a rebuilding team.

“The teams with money next year are mostly young teams,” the executive said. “So maybe Horford was looking at the landscape and saw who had cap space and wound up saying, ‘I do not want to go to Houston, man.’ It is a win for both sides, really, but if he wanted to chase money, he could have gotten more.”

Horford’s team-friendly deal puts the Celtics in a better position to re-sign Grant Williams, Deveney adds. Horford is making $26.5MM this season and Williams is at $4.3MM in the final year of his rookie contract. Boston wants to keep their combined salaries in the same range, so the team could theoretically offer Williams a new deal starting at about $20MM per season. However, sources have told Deveney that the Celtics might be reluctant to match an offer for the restricted free agent that’s in the $18-20MM range.

Raptors guard Fred VanVleet will miss his second straight game on Monday due to a non-COVID illness, Josh Lewenberg of TSN Sports tweets. The Raptors are facing the struggling Pistons in Detroit. Forwards Pascal Siakam and Precious Achiuwa are also out of action, while big man Khem Birch is listed as questionable.

Sixers forward Tobias Harris is seeing his role change again after a recent injury to James Harden, writes Keith Pompey of The Philadelphia Inquirer. With Harden sidelined for about a month, Harris is being asked to carry more of the scoring load.

“Evolving into what the situation is when presented,” Harris said. “Sometimes that is going to be a space on the floor. And obviously at times, it’s limited play calls. But you just find other ways to adapt.”

Harris is averaging 15.0 PPG through 11 games this season, but that number has risen to 22.0 in the two games without Harden. He’s also taking on more play-making duties, setting up teammates for open three-point shots with drives to the basket.

“I’ve always prided myself on being a very good team basketball player in the half-court offense,” Harris said. “That’s something I was always able to do and be a part of.”

The Nets decided not to hire Ime Udoka, but he’s expected to eventually land another head coaching job, according to ESPN’s Adrian Wojnarowski (video link). Wojnarowski said Brooklyn conducted a thorough investigation of the suspended Celtics coach, but determined it was “too difficult” to bring him on board because of the turmoil surrounding the team.

Nets officials view Jacque Vaughn as better able to stabilize the organization, but Woj believes Udoka could have been the choice under different circumstances. He adds that plenty of other teams have also done their due diligence on Udoka’s situation and it wouldn’t be surprising to see him back in the league by next season.

The Celtics might have preferred to see Udoka go to Brooklyn, writes Brian Robb of MassLive, adding that it’s telling that they weren’t seeking any compensation from the Nets. Udoka’s departure would have prevented a potential legal battle regarding the years he has left on his contract. It may have also eased the pressure on interim coach Joe Mazzulla, who continues to operate in Udoka’s shadow.

After the Nets parted ways with Steve Nash last week, top team officials spoke to Ime Udoka within the next 24-to-48 hours and he begin preparing to potentially take over the team’s head coaching job, multiple sources tell Shams Charania of The Athletic. However, according to Charania, Brooklyn ultimately deviated from its plan to hire Udoka due to a handful of factors.

The Nets’ due diligence into Udoka and his suspension in Boston took longer than initially expected, and there was push-back from people inside and outside of the organization about the possible hiring, sources tell The Athletic. Charania also cites “short- and long-term question marks around the team’s ability to contend” due to Kyrie Irving‘s uncertain future as another factor.

According to Charania, the Nets have seen buy-in from the players under Jacque Vaughn, who has created “positive energy” inside a locker room that has already dealt with its share of drama this season. Additionally, while the sample size is small, Brooklyn’s defense seems to be improving under Vaughn, which is another reason why the team was comfortable removing his interim title and making him the permanent head coach, Charania adds.

11:53am: Vaughn’s promotion to permanent head coach comes with a deal through the 2023/24 season, according to Adrian Wojnarowski of ESPN (Twitter link). 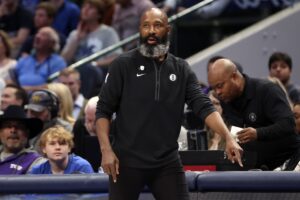 11:15am: The Nets have named Jacque Vaughn as their head coach, the team announced today in an official press release. Vaughn had been the team’s acting head coach since Steve Nash‘s exit from the franchise, so today’s announcement essentially removes the interim tag from his title.

“Jacque’s basketball acumen, competitiveness and intimate knowledge of our team and organization make him the clear-cut best person to lead our group moving forward,” general manager Sean Marks said in a statement. “He has a proven ability to get the best out of our players, hold them accountable and play a cohesive, team-first style of basketball.”

The news is particularly notable because it signals that Brooklyn isn’t moving forward with its rumored plan to hire Ime Udoka away from the Celtics. Udoka, who is serving a one-year suspension in Boston for sending crude messages and engaging in a relationship with a female subordinate, emerged as the frontrunner to replace Nash last week.

However, the Nets were said to still be going through the vetting process on Udoka and reportedly received push-back from some “strong voices,” including from some of the female staffers within the organization.

It’s unclear if Udoka could still reemerge a candidate for Brooklyn at some point down the road or if the vetting process removed him from the team’s radar entirely — either way, it sounds as if Vaughn will coach the Nets for at least the rest of the 2022/23 season, and potentially beyond that.

A former NBA guard, Vaughn transitioned into coaching following his retirement as a player, initially serving as an assistant on Gregg Popovich‘s staff in San Antonio. He was hired as the Magic’s head coach in 2012, but posted a dismal 58-158 (.269) record during two-and-a-half seasons in that role.

Vaughn was an assistant for the Nets from 2016-22, briefly serving as the team’s interim coach after Kenny Atkinson was let go in 2020. He guided the Nets to a 7-3 record at that time and has led the club to a 2-2 mark since replacing Nash last week.

Naming Vaughn the full-time head coach should smooth out one area of instability in Brooklyn, but there are other issues to resolve. Vaughn will be tasked with trying to help turn things around for Ben Simmons, who has looked like a shadow of his former self since returning from a season-long absence, and the Nets will still have to determine whether to reinstate Kyrie Irving following his suspension.