Mohamed Bamba won’t play for the Magic when Summer League starts on Sunday, but he’s practicing with his teammates in Las Vegas, writes Chris Hays of The Orlando Sentinel. The third-year center got a path to regular minutes for the first time in his career when Orlando unloaded its veteran centers last spring and turned the position over to Bamba and Wendell Carter Jr.

“For me it was no-brainer,” Bamba said of his decision to come to Las Vegas. “We got a new coach, new system, new guys and I just wanted to get well acclimated way before training camp.”

Jamahl Mosley, who has taken over as head coach, said this week that it was encouraging to see Bamba join the team on his own. Bamba said he’s looking forward to playing under Mosley.

“He’s made it clear that my presence (on the floor) is needed, is wanted and it’s just all about getting out there and putting in the right amount of work,” Bamba said. “Practicing with the team only helps the chemistry of the team. Coming out here … I had a choice, either to stay in Orlando and work with the coaches that didn’t come to Summer League or come here and add in these good deposits from the team.”

The Knicks have officially completed their addition of Austin Rivers in a sign-and-trade deal with the Rockets rather than signing him outright, announcing the move today in a press release. 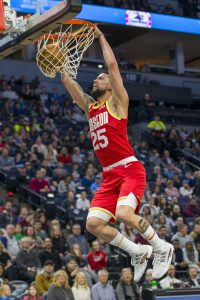 Rivers had agreed over the weekend to sign a three-year, $10MM deal with the Knicks. The final two years of his new contract are non-guaranteed, which is permitted under sign-and-trade rules.

The inclusion of Llull in this deal is the most interesting new piece of information. The Rockets have long attempted to get the Spanish guard, who was selected 34th overall in the 2009 draft, to come stateside and play in the NBA, but he has preferred to remain in his home country with Real Madrid — he has played for the EuroLeague club since 2007.

At age 33, Llull seems increasingly unlikely to ever make the move to the NBA. That’s even more true of Dragicevic and Hervelle, who were drafted in 2008 and 2005, respectively, and are in their mid-30s now. However, their rights could be useful as filler in future trades.

Sanon, who has played for Slovenian and Ukrainian teams since being drafted in 2018, is still a candidate to eventually sign an NBA contract. He was the 44th overall pick two years ago and is still just 21 years old.

New York will technically be hard-capped as a result of acquiring a player via sign-and-trade. The team remains far below the cap for the time being though, so it’s fair to assume that $138.93MM hard cap won’t become an issue in 2020/21.

William Wesley is not expected to join the Knicks front office in any formal capacity, Shams Charania of The Athletic reports. Known around NBA circles as “Worldwide Wes,” Wesley is a business partner of player agent Leon Rose, who is expected to be named the team’s head of basketball operations. It’s believed the Knicks would offer a position to Wesley if he wanted a front-office role, but his other business ventures make a formal title unlikely, Charania adds.

We have more on the Knicks: 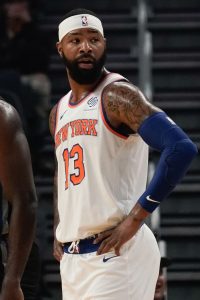 1:45pm: The Clippers and Knicks have reached an agreement on a trade that will send Marcus Morris to Los Angeles, sources tell Shams Charania of The Athletic (Twitter link). According to Marc Berman of the New York Post, the return for Morris will feature Maurice Harkless and multiple draft picks, including the Clippers’ 2020 first-rounder.

The deal will also include a third team, according to ESPN’s Adrian Wojnarowski (Twitter link), who reports that the Wizards will acquire Jerome Robinson from the Clippers, sending Isaiah Thomas to L.A.

The Knicks will get Detroit’s 2021 second-round pick from the Clippers, as well as the right to swap first-round picks with the Clippers in ’21, reports Ian Begley of SNY.tv (via Twitter). That pick swap will have top-four protection, adds Ohm Youngmisuk of ESPN (via Twitter). Draft-and-stash prospect Issuf Sanon will also go to New York (from Washington), tweets David Aldridge of The Athletic.

When Charania previously reported that the Knicks and Clippers were in serious discussions about Morris, Jovan Buha of The Athletic suggested that Los Angeles was offering Harkless, Mfiondu Kabengele, Terance Mann and its 2020 first-round pick. The final package for the Knicks is heavier on draft assets than NBA players, with Kabengele and Mann remaining in L.A.

Morris, 30, is having a career year in New York, with averages of 19.6 PPG and 5.4 RPG to go along with a .442/.439/.823 shooting line in 43 games (32.3 MPG). The Knicks were initially believed to be leaning toward keeping him and trying to re-sign him in free agency this summer, but changed course following Steve Mills‘ removal from the president of basketball operations role earlier this week.

Morris will join a talented Clippers frontcourt that features star forwards Kawhi Leonard and Paul George. According to Chris Haynes of Yahoo Sports (via Twitter), the team plans to start all three players when everyone’s healthy, alongside Patrick Beverley and Ivica Zubac.

The Lakers were among the other teams with interest in Morris, but were reportedly unwilling to include both Kyle Kuzma and Danny Green in a potential deal.

Washington concluded a three-day minicamp today in which several notable players participated in full-court scrimmages and drills. No. 9 overall pick Rui Hachimura and No. 42 overall pick Admiral Schofield were among the prospects participating in drills for the Wizards. Schofield believes the two rookies can play well together, as he told Hoops Rumors and other media members in attendance.

“I can play multiple positions. So can [Hachimura],” Schofield said. “He can play the wing and the forward. That’s going to make us pretty lethal. We just have to get used to the [NBA level] and how things are done here, understanding from the vets how to pace ourselves and how to play the game the right way.”

Schofield, whose rights were traded to the Wizards in the Jonathon Simmons deal on draft night, initially thought he was going to Philadelphia. The 22-year-old said he actually found out about his draft spot through Adrian Wojnarowski on Twitter, as I recently passed along.

“[My agent] told me I was going to get picked…but I saw the tweet before my agent called, which was pretty cool. Woj is elite,” Schofield said.

The Wizards‘ workout with Coby White and Nassir Little drew a larger than normal crowd with owner Ted Leonsis and star Bradley Beal among the observers. Little said that more team representatives were present for his workout in Washington than in any of his other pre-draft workouts.

“The building is pretty full right now,” Little told Hoops Rumors and the other media in attendance. “It shows how interested they are in me and Coby, so that’s been pretty great.”

While the large turnout may lead to speculation about their interest in White and Little, there’s still no sense of what direction the Wizards will go in with the No. 9 overall pick. Interim GM Tommy Shepard is running the show for Washington and the front office will use the next couple days to further evaluate the pool of talented prospects.

Team officials had dinner with White on Sunday night and Washington clearly has interest in the North Carolina native. However, White may not be available by the time the Wizards are on the clock. Despite the projections, White doesn’t see the workout as a waste of time.

“I’m blessed to be here,” White said. “I love it. My sister lives not too far. It’s a great town. Blessed to be here and blessed that they gave me the opportunity to come in and work out for them.”

The Hornets plan to stash 6’10” forward Arnoldas Kulboka in Europe, Chapel Fowler of the Charlotte Observer relays. The Hornets took the Lithuanian native with the No. 55 pick with that plan in mind. “He’s got a buyout that’s manageable, but we’ve talked to his representative …” GM Mitch Kupchak told Fowler and other media members. “At least right now, the plan is to keep him over there and hopefully watch him develop and then, when he’s ready, bring him back over here and see how good he is.”

In other developments around the Southeast Division:

With the June 11 deadline to withdraw from this month’s draft right around the corner, Nicola Lupo of Sportando is reporting that Ukrainian point guard Issuf Sanon will remain in the 2018 NBA Draft, per his agent.

Sanon, 18, who has a multiyear contract with Petrol Olimpija Ljubljana in Slovenia that contains an NBA out, will be the youngest player in the draft, but ESPN’s Jonathan Givony has Sanon being selected No. 42 overall by the Pistons in his latest mock draft nonetheless. Givony also has Sanon ranked as his No. 63 overall prospect in his latest big board rankings.

In his recent report on the NBA’s new Global Camp in Italy, Givony noted that Sanon was “arguably the most talented draft-eligible player in attendance,” impressing scouts with his ability to push the ball up the floor and play pick-and-roll.

That being said, Sanon still needs to work on his shooting and keeping his emotions in check, notes Givony, but those are attributes in which many younger player often need improvement, meaning there’s room for growth.

Malik Newman, a dynamic shooting guard who led Kansas to the Final Four, will declare for the draft and sign with an agent, according to a press release from the school’s athletic department.

The 21-year-old was named Big 12 Newcomer of the Year after transferring from Mississippi State. He averaged 14.2 points in 39 games and was named Most Outstanding Player in the Big 12 Tournament and the NCAA’s Midwest Regional.

“He had a terrific season this year and was one of the best players in the NCAA tournament,” said Jayhawks coach Bill Self. “I think this is good timing for Malik. We wish nothing but the best for him and appreciate all his efforts. We all know his best basketball is still ahead of him.”

Newman is listed 46th in the latest list of top 100 prospects compiled by Jonathan Givony of ESPN.

There are more early draft entrants to round up: