Star forward Kawhi Leonard didn’t travel to Walt Disney World this week with the rest of the Clippers this week, sources tell Chris Haynes of Yahoo Sports. According to Haynes, Leonard was given permission by the club to tend to a family matter. Haynes wrote on Wednesday that the reigning Finals MVP was expected to arrive in Orlando within “a few days.”

Leonard isn’t the only Clippers player who will be late in arriving to the NBA’s campus. Sources tell Andrew Greif and Broderick Turner of The Los Angeles Times (Twitter link) that forward JaMychal Green is tending to a family matter of his own and isn’t in Orlando yet. Green is expected to arrive on Sunday, per The L.A. Times.

The Clippers have a realistic opportunity to bring back their 11-man rotation next season, according to Jovan Buha of The Athletic. Many of the decisions will come down to whether the organization wants to make a financial commitment to its current players or explore other options.

L.A. has Bird rights on Montrezl Harrell and can offer him a longer and more valuable contract than anyone else. The Clippers have Non-Bird rights on Marcus Morris, who was acquired from the Knicks last month, and can offer a new deal starting at $18MM per season. JaMychal Green has a $5MM player option, and the team might decide to use part of its mid-level exception to re-sign Reggie Jackson.

Buha adds that the loss of revenue from the shortened season could work in the Clippers’ favor by depressing a free agent market that’s already limited by the small number of teams with cap space. Harrell and Morris may not get the offers they would have under normal circumstances, while Green could decide to stick with his guaranteed money.

Despite a loss last night to the Suns, the 2019/20 season is off to a good start for the Clippers. Unfortunately, it doesn’t appear the same can be said about the team’s effort to build a new arena, writes Jason Henry of the Orange County Register.

Per Henry, the Clippers efforts to fast track a new home in Inglewood have stalled because the California Air Resources Board does not believe the project meets the necessary environmental standards, according to a letter written by California Governor Gavin Newsom.

Newsom considers the new arena an important economic benefit for the L.A. community, urging the Clippers and CARB to continue working toward a resolution, but the Governor will not intervene in the decision-making process by CARB, an independent body tasked with determining whether the Clippers can adequately prevent a net increase in greenhouse gases and other emissions.

“I support holding project sponsors to California’s high standards for environmental benefit and mitigation, and I hope you collectively can find a path forward,” Newsom wrote in his letter.

The Clippers want to start construction in 2021 and have the arena game-ready three years later, when their lease at Staples Center expires. It appears to remain unknown at this time how much of a barrier this issue will become to that timeline.

There’s more news from the Clippers this afternoon:

The Lakers felt betrayed by Kawhi Leonard in the free agent process, ESPN’s Brian Windhorst said on his latest podcast (hat tip to Michael Kaskey-Blomain of CBS Sports). Some members of the team’s front office believe Leonard “played” them as he negotiated a deal with the Clippers. Leonard didn’t announce his intentions until July 6, causing the Lakers to miss out on other free agents while they were waiting.

The Raptors weren’t happy with the way things worked out either, Windhorst adds, saying that Leonard asked for “the sun, the moon, the stars” before deciding to leave.

JULY 18: The deal is official, per a release from the team.

JULY 8: The Clippers are finalizing an agreement with free agent forward JaMychal Green that will bring him back on a two-year, $10MM contract, reports Shams Charania of The Athletic (Twitter link). According to Charania (via Twitter), Green turned down more lucrative offers from other teams to return to Los Angeles to pursue a championship with the team. 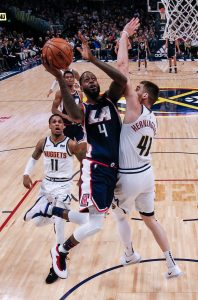 Green’s new deal – which sounds like it’ll fit into the Clippers’ room exception – has a second-year player option, according to Charania. The structure of the contract will give the 29-year-old a de facto no-trade clause for the 2019/20 league year, so the team would need his approval to move him.

In 24 games with the Clippers at the end of last season, Green knocked down 1.4 threes per game at a 41.3% rate — both marks would have been career highs.

With Green back in the fold, the Clippers – who are considered the 2020 title favorites by oddsmakers – could run out a versatile 10-man rotation that features Patrick Beverley, Lou Williams, Landry Shamet, and Rodney McGruder in the backcourt, Kawhi Leonard, Paul George, Maurice Harkless, and Green as forwards, and Ivica Zubac and Montrezl Harrell at the five.

Youngsters Jerome Robinson and Mfiondu Kabengele are also in the picture, and it wouldn’t be surprising to see the Clippers add another veteran or two using the minimum salary exception.

With Green off the board, Kelly Oubre and Jabari Parker are the only two free agents from our top-50 list who have yet to agree to deals.

Representatives from nearly half of the league’s teams were in attendance for a workout that included former NBA stars Amar’e Stoudemire and Monta Ellis, Chris Haynes of Yahoo Sports tweets.

The Lakers, Clippers, Warriors, Knicks, Thunder, Bucks, Pistons, Kings, Nuggets, Blazers, Magic, Hawks, Wolves and Wizards were all in attendance. Haynes adds that 15 international teams from Europe and Asia also had representatives in Las Vegas for the workout.

Andre Iguodala believes he can play past his current contract, which expires at the end of next season, but he’ll only do it if the price is right, relays Mark Medina of The San Jose Mercury News. Iguodala will be 36 years old when his $17.18MM deal is up next summer, and he has no doubts about his ability to remain in the league.

“Yeah I can easily,” he said. “But it’s going to cost you.” Iguodala refused to name a dollar amount, but added, “For whoever wants me to play, I ain’t playing to play. I’m playing to help my guys. It’s got to be worth my time. … Depending on what the salary cap is. What is the team, coach, ownership as well as the stakeholders?”

Coming off a non-invasive procedure on his left leg during the offseason, Iguodala played in 71 games, even though his minutes were limited to a career-low 23.2 per night. A vegan diet has helped to prolong his career, along with weight training, meditation, yoga and icing.

The only coach who had his front-office duties removed but still remains with the same team is Doc Rivers, who continues to coach the Clippers despite no longer serving as the club’s GM. Speaking to ESPN’s Adrian Wojnarowski (podcast link), Rivers admitted that the GM job was “too big” to do on his own, adding that he felt comfortable transitioning out of it as long as he still had some input in personnel decisions.

The fact that the Clippers promoted Lawrence Frank to run their front office, rather than making an outside hire, also allowed Rivers to feel comfortable making the adjustment.

“I’m the one who brought Lawrence in,” Rivers told Wojnarowski. “It would have been interesting if they said, ‘We’re taking your power away and we’re going to hire someone else.’ … There’s no way I would’ve been here without Lawrence staying.”

The change in title for Rivers has been a success, as his work on the sidelines for the 2018/19 Clippers represents perhaps the best coaching performance of his long career.

As we wait to see how far Rivers can take the Clippers in the postseason, let’s round up a few more Pacific notes…

Suns coach Igor Kokoskov won’t have to worry about being dismissed before the season ends, co-interim GM James Jones said in an interview today with Arizona’s Sports Station. Kokoskov has guided Phoenix to a league worst 12-50 record in his first year as an NBA head coach, but the front office hasn’t discussed making a change, even in the midst of a 17-game losing streak.

“We’re committed to Igor, and we’re committed to finishing the season out on a high note,” Jones said. “We have room for improvement. That’s the challenge across the organization for us to improve upstairs as well as downstairs, on the court, off the court. So we’re going to push it. But Igor, it’s a tough job but he’s up to the challenge.”

Kokoskov received a three-year contract when he was hired last May, so the Suns would be on the hook for two more years of payments if they were to replace him. He had spent 18 years as an assistant coach, including five with Phoenix, before taking the job.
There’s more tonight from the Pacific Division:
Retweet 2 Share 0 Send via email0

Clippers owner Steve Ballmer wants to see his team in the playoffs, even though it would mean surrendering this year’s first-round pick, writes Sam Amick of The Athletic. Sources tell Amick that Ballmer has made his wishes clear to the organization, although it was widely assumed that the Clippers were resigned to a second straight non-playoff season when they traded Tobias Harris to the Sixers earlier this month.

L.A.’s draft choice, which is owed to the Celtics, is lottery protected, which means the Clippers keep it if they don’t make the postseason, but lose it if they do. The pick has the same protection for next year, then becomes a 2022 second-rounder if the Clippers miss the playoffs in both seasons.

While it might be nice to hold onto the pick for an infusion of young talent or an asset to chase Anthony Davis, the Clippers believe a playoff appearance is more important and could be a valuable selling point when they chase free agents this summer.

“I think the race, alone, would be a learning tool. If we can make it and they get in, you can’t have a better teacher than the playoffs,” coach Doc Rivers told Dan Woike of The Los Angeles Times. “You can talk about the playoffs all you want, but it’s a different beast.”