The Mavericks are “determined” to find space on their roster for Theo Pinson next season, Marc Stein writes in his latest Substack article. Pinson appeared in just 19 regular season games in 2021/22 and wasn’t eligible to play in the postseason, but the Mavs view the 26-year-old wing as an important part of the team dynamic in Dallas, Stein explains, noting that center Boban Marjanovic falls into this category too.

Marjanovic has a $3.5MM contract for next season, so the Mavericks will have no problem keeping him around if they want to, but Pinson’s two-way deal is set to expire, making him an unrestricted free agent. Since he’ll have four years of NBA service under his belt, Pinson will no longer be eligible to sign a two-way contract in 2022/23 — he’d have to get a standard contract and be part of the 15-man roster if the Mavs want to retain him.

Pinson was viewed as the unofficial ring leader of the Mavs’ bench mob that earned the team $175K in fines during the playoffs due to its “bench decorum” violations.

Jim Boylen‘s stint as the Bulls’ head coach was short-lived and ultimately unsuccessful, as he led the team to a record of just 39-84 (.317) from 2018-20. After his tumultuous tenure in Chicago, Boylen was extremely appreciative to get the chance to coach Team USA’s qualifying team for the 2023 World Cup, as he tells Joe Vardon of The Athletic.

“This opportunity, you kind of get your sea legs back. I got my voice back,” Boylen said. “It was a godsend to come and do this, and also, this is the biggest challenge I’ve ever had.”

Boylen has led Team USA to a 3-1 record in the qualifiers to date, picking up wins in February over Puerto Rico and Mexico. There are four more qualifying windows to come, with the next one scheduled for June.

USA Basketball has announced that former Bulls head coach Jim Boylen will coach Team USA during November’s qualifying games for the 2023 FIBA World Cup, which will take place in the Philippines, Japan, and Indonesia. The U.S. team will face Cuba on November 28 and Mexico on November 29.

While NBA players make up Team USA’s roster in the World Cup itself, the qualifiers take place during the NBA season, so the roster is typically made up of G League veterans. After November’s games, the next round of qualifiers will take place in February.

Jeff Van Gundy coached the qualifying team leading up to the 2019 FIBA World Cup before handing things off to Gregg Popovich for the World Cup itself. USA Basketball has yet to announce Popovich’s successor, but Steve Kerr has been identified as a frontrunner. If Kerr gets the job, he’d coach the 2023 team in the World Cup, assuming Boylen’s group clinches a spot in the event.

Nuggets wing Will Barton made it clear multiple times earlier this month that he believes he deserves to be a starter. However, after coming off the bench in Wednesday’s opener, Barton said he’s happy for Michael Porter Jr. – who has been promoted to the starting lineup – and is prepared to accept his new sixth man role, as Mike Singer of The Denver Post writes.

“My concern is not about (starting) anymore once I channel my energy to where it has to be,” Barton said. “That’s where I am, so I’m locked in right now, I’m coming off the bench. I’m not trying to worry about if I’m gonna start again. Right now I’ve got a job to do, and that’s my focus is to come off the bench and try to change the game for us and still help us win games.”

While Barton may not have started the Nuggets’ opener, he got the opportunity to finish it, playing all five minutes of overtime in Denver’s loss to Sacramento.

Derrick Rose is eager to mentor Pistons lottery pick Killian Hayes, according to Keith Langlois of Pistons.com. Rose, who is entering his walk year, plans to make Hayes “uncomfortable” in camp to get the French point guard prepared for the rigors of the NBA. “My job is to push him and to groom him,” Rose said. “Coming from overseas, guys are going to try to play aggressive with him, so it’s my job to play aggressive on him throughout this whole camp so when he gets in a game he won’t feel that much pressure.”

Bulls head coach Billy Donovan has informed multiple assistant coaches still under contract with the team that they won’t be part of his staff for the 2020/21 season, according to K.C. Johnson of NBC Sports Chicago.

Roy Rogers, Dean Cooper, and Nate Loenser won’t be returning to to the club after working on Jim Boylen‘s staff last season, Johnson reports. Karen Stack Umlauf has also been let go, per an official announcement from the Bulls.

“I appreciate the time that I was able to spend with Dean, Nate, Roy and Karen. I really want to thank all of them for their service and commitment to the Chicago Bulls,” Donovan said in a statement. “This is the tough side to our business, and I wish all of them the best moving forward.”

Rogers had only completed one season on his three-year deal and Loenser had his team option for 2020/21 exercised in the spring, but Bulls ownership continues to give the team’s new decision-makers the green light to make changes even if they’ll cost the organization some money, per Johnson.

It’s possible the Bulls will make additional changes to their coaching staff, but for now it sounds as if Chris Fleming is sticking around. Fleming worked with new Bulls executive VP of basketball operations Arturas Karnisovas in Denver during the 2015/16 season, and Johnson has previously reported that there’s a “trust factor” between the two men.

It remains to be seen who will join Donovan’s revamped staff in Chicago, but Joe Cowley of The Chicago Sun-Times speculates that Maurice Cheeks could be a candidate. Cheeks is a Chicago native and has been an assistant under Donovan for the last five years in Oklahoma City.

Speaking to K.C. Johnson of NBC Sports Chicago following his recent dismissal, former Bulls head coach Jim Boylen expressed no hard feelings toward his old team, telling Johnson that he “loved every minute of working for the Bulls” and that he understands why new head of basketball operations Arturas Karnisovas would want to bring in his own coach.

Boylen also expressed no regrets about his stint in Chicago, noting that Bulls ownership and former head of basketball ops John Paxson asked him to “bring more discipline” to the team. Boylen praised his players for competing hard, citing injuries and a young roster as a couple of the reasons why the club didn’t win more games.

“I don’t worry about people who haven’t coached critiquing me,” Boylen said. “I don’t try to be a doctor.”

Despite Boylen’s comments, reviews of his time with the Bulls weren’t exactly positive. According to Darnell Mayberry of The Athletic, who took a deep dive into the last two seasons in Chicago, Boylen’s tenure was described by multiple people within the organization as “toxic,” with one calling it “a circus” and another referring to it as a “nightmare.”

In Mayberry’s view, Boylen tried to maintain total control of the team with a tough, abrasive style, but “couldn’t get out of his own way.” Boylen’s greatest success during his time as the Bulls’ head coach, according to Mayberry, was “simply getting the job.”

More than five months after he last coached a game for the Bulls, Jim Boylen was relieved of his duties on Friday morning, with the team announcing it will launch a formal search to identify and hire a new permanent head coach.

A source tells Joe Cowley of The Chicago Sun-Times (Twitter links) that Boylen displayed some behavior that was considered “detrimental to the organization” during his tenure with the team, including a verbal run-in with a team chef.

While Cowley’s report suggests those incidents may have played a part in the Bulls’ decision to move on from its head coach, head of basketball operations Arturas Karnisovas said in a conference call today that “it was strictly a basketball decision” to fire Boylen, per K.C. Johnson of NBC Sports Chicago (Twitter link).

Here’s more on the Bulls: 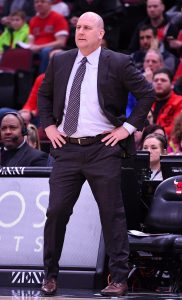 New Bulls executive vice president of basketball operations Arturas Karnisovas has plenty of interesting choices to make with regards to team personnel on both the court and on the bench during the 2020 offseason. Bobby Marks of ESPN Insider examines some of the key issues Karnisovas should address.

The future of embattled head coach Jim Boylen has been the hottest topic of speculation for Bulls fans since the hiring of Karnisovas earlier this year. Boylen’s disappointing 39-84 record has been partly affected by several player injuries, including those afflicting former lottery picks Lauri Markkanen and Wendell Carter Jr., but Marks addresses just how much blame for the team’s poor finishes during the last two seasons should be placed on those absences as opposed to Boylen’s coaching approach.