Joel Embiid turned in an MVP performance Saturday afternoon while matched up with Nuggets center Nikola Jokic, who has beaten him out for the award the past two seasons, writes Kyle Neubeck of The Philly Voice. Embiid posted 47 points, 18 rebounds and five assists and made several big plays late in the game to help the Sixers win the battle between two of the NBA’s best teams.

Embiid was a bit too focused on his individual matchup with Jokic early on, Neubeck observes, but he began to take over the game in the second quarter, showing off his full offensive arsenal. Many of Embiid’s points came via a two-man weave with James Harden that resulted in prime scoring opportunities.

Afterward, Embiid said he doesn’t have a personal rivalry with Jokic, but he felt it was “a little disrespectful” that he wasn’t named a starter when the results of this year’s All-Star voting were announced Thursday, relays Tim Bontemps of ESPN.

“I’m used to it,” Embiid said of the snub. “It’s not the first time. I think it’s more of a motivation to go out and win the whole thing. That’s the only way I’m probably going to get that respect.”

Warriors guard Stephen Curry and Sixers center Joel Embiid have each been fined $25K by the NBA for separate incidents, the league announced (Twitter links).

Curry, the reigning Finals MVP, was given a technical foul and ejected for tossing his mouthpiece with 1:14 remaining in Wednesday’s two-point victory over Memphis. As Kendra Andrews of ESPN writes, Curry was frustrated by an “ill-advised” three-point attempt by teammate Jordan Poole.

According to Andrews, the mouthpiece “ricocheted off the court and landed near the courtside seats” and Curry received his third career ejection (second in the regular season). The NBA’s press release states that he was fined for “throwing his mouthpiece into the spectator stands” (video link).

“It was a crucial time in the game, and the way that our season has gone, questions about a heightened sense of urgency … when you want something really bad … I reacted in a way that put myself out of the game and put the team in a tough place,” said Curry, who disagreed with the immediate ejection because his mouthpiece didn’t come in contact with anyone.

Embiid, meanwhile, was fined for “making an obscene gesture on the playing court” in the third quarter of Wednesday’s victory over Brooklyn. He was not penalized during the game for his D-Generation X-inspired celebration.

Sixers guard Tyrese Maxey is coming to terms with his new reserve role, writes Keith Pompey of The Philadelphia Inquirer. Maxey was demoted to a bench role in favor of the more defensively oriented De’Anthony Melton.

“Sometimes you have to be the bigger person,” Maxey noted “I feel like it was kind of trending that way. But I’m a professional at the end of the day.”

Sixers star center Joel Embiid is listed as questionable for Tuesday night’s home game against the Pistons, Keith Pompey of the Philadelphia Inquirer tweets. Embiid has missed the past three games with a sore left foot, including Philadelphia’s road win over Detroit on Sunday. P.J. Tucker is probable with a sinus infection after missing Sunday’s game.

The Raptors offered guard Fred VanVleet a four-year, $114MM extension prior to the season and it was never formally “rejected,” a source told Michael Grange of Sportsnet.ca (Twitter link). Instead, the two sides mutually decided to wait, with no specific deadline set.

Josh Lewenberg of TSN Sports was the first to report the Raptors’ extension offer. VanVleet can become a free agent this summer if he declines his $22,824,074 option.

Friday marked Joel Embiid‘s second straight missed game due to left foot soreness, but head coach Doc Rivers said the team is confident it won’t be a long-term injury, per ESPN’s Tim Bontemps (Twitter link). Rivers added that Embiid is “doing better,” but he isn’t sure how long the Sixers‘ star center will be sidelined.

Even after dropping Friday’s game, Philadelphia has a winning record (6-4) so far without Embiid this season, which is impressive considering how important he is to the team.

Here’s more on the Sixers:

Though starting Sixers power forward Tobias Harris may want an extension from Philadelphia, it would behoove the team to keep him on his current deal to maximize its flexibility, Kyle Neubeck of PhillyVoice.com opines in a new mailbag. Harris will be a free agent in the summer of 2024.

Neubeck notes that moving on from Harris for a better player would probably necessitate also including the rookie scale contract of impressive shooting guard Tyrese Maxey. Neubeck opines that the team should hold off on an extension unless it comes at a discount.

Elsewhere in the mailbag, Neubeck also discusses the possibility of the Sixers having a quiet trade deadline as they start to gel, closing lineups, and more.

There’s more out of the City of Brotherly Love:

The Heat have frequently been cited as a potential trade suitor for Suns forward Jae Crowder, but a source who has spoken to Miami’s front office believes the Heat may only be interested in Crowder if he’s bought out, reports Barry Jackson of The Miami Herald.

Jackson adds that the Heat would likely still have interest in trading for Crowder if the Suns are willing to accept a “bad contract,” which is presumably a reference to Duncan Robinson‘s deal — it still has three years and $57MM+ left after this season. However, the Suns won’t want to take on Robinson and are a good bet to eventually find a deal they like for Crowder without having to resort to a buyout. In other words, if Jackson’s source is right, it sounds like Miami is a long shot to land the veteran forward.

Mavericks guard Luka Doncic and Sixers center Joel Embiid have been named the NBA’s Players of the Month for December, the league announced today (via Twitter). 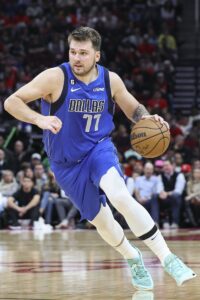 Both Doncic and Embiid are perennial All-NBA players when healthy, but December was an extraordinary month even by their lofty standards.