The Suns matched the Pacers’ four-year, $133MM offer sheet for Deandre Ayton but there’s still some lingering tensions between the center and coach Monty Williams. Ayton said on Tuesday he still hasn’t spoken with Williams since he was benched during the Game 7 conference semifinals loss to the Mavericks in the spring.

“I haven’t spoken to him at all, ever since the game,” Ayton told ESPN’s Brian Windhorst and other media members. Asked what he plans to say to Williams when they do speak, Ayton replied, “I can show him better than I can tell him. It’s life. Nobody cares about the uncomfortable nature of it, it’s how you perform and what you bring to the table. What’s said is already said.”

Williams believes he’ll be able to mend fences with Ayton.

“I think 1-on-1s are always needed between guys I’ve been around for awhile,” Williams said. “Some guys need it and some guys don’t. I’ll identify that as the season progresses. I’ll talk to everybody as I always do during camp and it won’t be an issue at all.”

If things can’t be worked out, Phoenix will have to wait before finding a new home for Ayton. He’s not eligible to be dealt until January 15.

New Lakers head coach Darvin Ham isn’t committing to having Russell Westbrook in his starting lineup to open the 2022/23 season, telling reporters on Monday that the team has a “variety of options to fill in our backcourt,” as Kyle Goon of The Southern California News Group tweets.

It might have made a bad situation in Los Angeles worse if Westbrook had been pulled from the team’s starting lineup last season, but the former MVP appears to be keeping an open mind as he prepares for the coming year. Prior to his Media Day session, Westbrook told ESPN’s Adrian Wojnarowski that it doesn’t matter whether or not he feels “wanted” by the Lakers and that he’s “all-in on whatever it takes for this team to win,” even if that means coming off the bench.

Westbrook – who told Wojnarowski that he thinks he, Anthony Davis, and LeBron James can be “unstoppable” – said to reporters on Monday that he has talked to Davis and James at length this summer about what worked and didn’t work last season, and has found those conversations “very beneficial” (Twitter link via Jovan Buha of The Athletic).

While there’s no guarantee that Westbrook – long considered a trade candidate – will spend the entire season in Los Angeles, Lakers head of basketball operations Rob Pelinka said today that the point guard is still one of the NBA’s great players, and expressed confidence that Ham will bring out “another level” in him this season (Twitter link via Goon).

Even Westbrook’s longtime nemesis Patrick Beverley had nothing but praise for his new teammate, suggesting that the rumored animus between the two guards has been overblown and telling Dave McMenamin of ESPN (Twitter link) that Westbrook has been his “best friend” on the team since he was traded to L.A. last month.

As we wait to see whether this season goes any smoother for Westbrook than his first season in Los Angeles did, here’s more on the Lakers:

Lakers guard Kendrick Nunn was recently cleared for increased contact in workouts, league sources tell Jovan Buha of The Athletic. Head coach Darvin Ham told reporters, including Buha, that Nunn has primarily been working on individual drills and working out in the weight room.

According to Buha, Ham also said that Nunn, Austin Reaves and Lonnie Walker are all in consideration for the starting lineup, and the trio will have “notable roles.”

Nunn, who missed all of last season with a knee issue, said he was “100%” healthy back in July, but subsequent reports from Buha have cast a cloud on his status. Still, additional contact was an important hurdle to clear for the 27-year-old, so we’ll see if he’s ready to go once the season starts next month.

Before the Lakers traded Talen Horton-Tucker to the Jazz in the Patrick Beverley deal, the Pacers expressed interest in the 21-year-old wing, Michael Scotto said in the latest episode of the HoopsHype podcast.

As Scotto explains, the Pacers were interested in pursuing a deal that sent Buddy Hield, Myles Turner, and Daniel Theis to the Lakers in exchange for Russell Westbrook, Horton-Tucker, and Los Angeles’ 2027 and 2029 first-round picks. However, L.A. has been reluctant to include both of those first-rounders in any deal not involving Kyrie Irving, and wasn’t particularly enthusiastic about swapping Horton-Tucker for Theis.

Although Horton-Tucker is off the table, Indiana remains one of the two most likely landing spots for Westbrook, according to Jovan Buha of The Athletic, who says a deal involving the Pacers and Westbrook could involve just one of Hield or Turner — the Pacers still have $30MM+ in cap room and could take on Westbrook’s $47MM+ expiring contract without sending out both players. Still, Buha believes that Utah is a more viable destination for Westbrook than Indiana.

Here’s more on the Lakers from the HoopsHype podcast:

While former Lakers head coach Frank Vogel benched Russell Westbrook late in games a small handful of times last season, new coach Darvin Ham will have more power to do so this season, assuming Westbrook remains on the roster and Ham decides there are better fits in crunch time, says Jovan Buha of The Athletic.

Buha expects Westbrook to get opportunities to close out games, but notes that it will depend on his shooting, decision-making, and defense.

LeBron James and Anthony Davis are, of course, locks to be part of the Lakers’ “closing” five, and Buha views Austin Reaves as the next-best bet to join that group because he can be a secondary ball-handler. Buha predicts that Juan Toscano-Anderson and Troy Brown will fill out the closing five in instances when Westbrook is on the bench.

After missing all of the 2021/22 NBA regular season due to a knee injury, Lakers guard Kendrick Nunn says he’s fully recovered and excited about L.A.’s future. Nunn, who picked up his $5.25MM player option for the 2022/23 season last month, made those comments in a conversation with Chris McGee of Spectrum SportsNet (Twitter video link).

“I feel 100% [recovered] to be honest,” Nunn said of his current health status. “Back to where I’m normally playing at a high level.”

When the Heat opted to pull Nunn’s $4.7MM qualifying offer in the 2021 offseason, Nunn signed a two-year deal with the Lakers as an unrestricted free agent. Los Angeles envisioned him as a key bench scoring contributor for what it expected to be a contending team. However, after sitting out a season – and given his limitations as a defender – it is unclear how much of a contribution Nunn will be able to make this year.

The Lakers, who finished last season with a 33-49 record, could certainly use Nunn’s help should he recover his old form. He is one of just six Los Angeles players set to earn more than the veteran’s minimum this year. Given the value of his current contract as an expiring one-year deal worth more than the minimum, the veteran guard has also been floated as a potential trade chip the Lakers could use to improve their roster.

Kevin Durant‘s trade request increases the chances of a Kyrie Irving trade to the Lakers, Jovan Buha and Sam Amick of The Athletic report.

A straight Irving for Russell Westbrook swap would not work financially, so the Nets would either have to add another contract or include a third — and perhaps fourth team — for salary-matching purposes. Irving would be a better fit for LeBron James and Anthony Davis than Westbrook, providing better spacing offensively.

A potential deal could also lead the Lakers to part with first-rounders in 2027 or later.

If the Nets don’t want Westbrook’s salary, a third team could take that contract, with one of the Lakers’ picks and potentially Talen Horton-Tucker and/or Kendrick Nunn being involved.

A source told the Athletic that the chances of the Lakers landing Durant in a deal involving Davis is “zero.” Their focus, apparently, is on Irving.

We have more on the Durant/Irving situation:

Lakers guard Kendrick Nunn has elected to pick up his player option for the 2022/23 season, sources tell Dave McMenamin of ESPN (Twitter link). 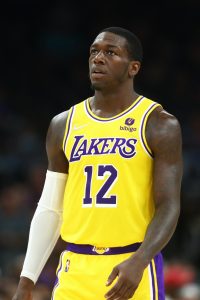 We knew this was coming, since Nunn referred to the decision as a “no-brainer” back in April. The option, which will pay Nunn a salary of $5.25MM, has been officially exercised, according to RealGM’s transactions log.

After spending two-plus seasons in Miami, Nunn signed a two-year, $10.25MM deal with the Lakers during the 2021 offseason, but a knee issue sidelined him for the entire ’21/22 campaign. The injury was one of many factors that contributed to Los Angeles’ struggles this past year, as the team didn’t get anything out of the player it used its mid-level exception to sign.

Nunn is expected to be on the trade block this offseason and may never end up appearing in a regular season game for the Lakers. But if he returns and if he’s fully healthy, he could still be an asset in L.A.’s backcourt.

With Nunn’s salary locked in, the Lakers will have four players on guaranteed contracts for next season — LeBron James, Anthony Davis, Talen Horton-Tucker, and Nunn. We can safely pencil in Russell Westbrook to that group too, since there’s virtually no chance he’ll turn down his $47MM+ player option. Austin Reaves (non-guaranteed contract) and Stanley Johnson (team option) are also good bets to return, but L.A. will still need to fill out about half its roster, with limited resources to do so.

Our player option decision tracker can be found right here.

Bulls GM Marc Eversley, a former Philadelphia executive, was instrumental in pushing the Sixers to acquire him in the 2019 draft, Deveney notes.

While Thybulle’s vaccination status stirred some angst within the Sixers organization during the postseason, it was his spotty 3-point shooting that rendered him a non-factor, despite his defensive reputation.

The Sixers could try to create some wiggle room under the luxury tax but that type of trade would likely require a third team.

One said he had no interest in acquiring Westbrook whatsoever. The second executive called Westbrook’s contract “terrible” and said it’s viewed very negatively around the league, and would only be dealt for multiple other salary dumps.

The third executive was a little more circumspect in his assessment, noting that Westbrook’s $47MM player option for 2022/23 is likely to be perceived as a negative asset, but certain teams might take it on in order to get rid of long-term contracts.

Gozlan doesn’t think the Lakers’ front office will consider using the waive-and-stretch provision on Westbrook, considering the team will finally be clear of Luol Deng‘s dead money cap hit ($5MM) this summer. Teams might be interested trading for Westbrook if he indicates he’d accept a buyout agreement for a slightly discounted rate — perhaps $5-10MM less — which Gozlan believes is the high-end of the range he might earn as a free agent.

Both Gozlan and Scotto think that the framework for a potential Westbrook/John Wall swap will be revisited this summer, with one GM telling Scotto that he thinks the Rockets guard can still be a high-level backup in the NBA, or even a fringe starter.

Here are some more Lakers rumors: