Pelicans point guard Kira Lewis played in an NBA game for the first time in a little over a year in Tuesday’s loss to Utah, writes Christian Clark of NOLA.com. The 21-year-old, who tore the ACL in his right knee last December, finished with four points and one rebound in six minutes.

“It’s been a long year,” Lewis said. “If anything, I have learned patience. With this leg, I couldn’t rush it or nothing. I just had to be patient and take it day by day. Here we are.”

The third-year guard added that the most challenging part of the rehabilitation process wasn’t physical.

“That’s probably the toughest, managing the mental,” he said. “Because you know you can’t play basketball. That’s something you have been doing your whole life. Just take it day by day. Talk to your people. And keep on moving. Use it as motivation.”

Here’s more from the Southwest:

Pelicans forward Zion Williamson missed Tuesday’s game vs. Memphis due to a right foot contusion, but the injury isn’t expected to sideline him for long.

According to Will Guillory of The Athletic (Twitter link), head coach Willie Green said on Tuesday that Williamson has a chance to be back in the lineup on Wednesday vs. Chicago. The former No. 1 pick will be evaluated today after resting on Tuesday.

Once Williamson is available, the Pelicans will continue trying to figure out how best to use him on offense. As Christian Clark of NOLA.com writes, after Williamson dished six assists to go with 26 points on Saturday, Green said the team trusts Zion to “make the right play” with the ball in his hands and will try to use him in a ball-handling role more often going forward.

“I think it’s adding more layers to our offense,” Green said. “We recognized that from the past, with Z handling the basketball and trying to take advantage of mismatches, it’s something we need to exploit.”

Pelicans guard Kira Lewis, who is making his way back from a torn ACL that sidelined him for much of last season and the start of this season, is inching closer to a return, having progressed to full five-on-five work, tweets ESPN’s Andrew Lopez.

While five-on-five scrimmages are generally one of the final steps in a player’s rehab process before he returns to action, Lewis may need some time to get back up to game speed and improve his conditioning after being sidelined for nearly a full year. According to Lopez, the next step for the former first-round pick is to spend some time with the Birmingham Squadron, New Orleans’ G League affiliate.

The Pelicans have announced in a press release that they have picked up their 2023/24 rookie scale contract options on third-year guard Kira Lewis Jr. and second-year swingman Trey Murphy III.

Lewis, a 6’1″ point guard out of Alabama, was drafted with the No. 13 pick in 2020 by the Pelicans. He continues to recover from a torn ACL and sprained MCL, which he suffered in December 2021. In his 24 games last season prior to the injury, Lewis posted averages of 5.9 PPG, 2.0 APG, and 1.6 RPG across 14.2 MPG as a bench player. As far as his rehabilitation goes, Lewis has progressed to 3-on-3 scrimmages with his teammates.

The 6’9″ Murphy was selected with the No. 17 pick out of Virginia in 2021. Thus far this season, the 22-year-old has taken a significant leap from his rookie output in 2021/22. Murphy’s minutes have more than doubled, from 13.9 MPG to 30.0 MPG. His other counting stats have taken major jumps, too. In four games this season, during which he has mostly operated as a reserve behind star forwards Zion Williamson and Brandon Ingram, Murphy is averaging 15.5 PPG, 6.5 RPG, 1.0 APG, and 1.0 SPG.

New Orleans is young and deep this season, and has gotten off to a terrific 3-1 start against some tough competition. Murphy at least has emerged as a big part of head coach Willie Green‘s rotation.

Kings coach Mike Brown is leaning strongly toward Kevin Huerter as his starting shooting guard, Jason Anderson of the Sacramento Bee reports. Acquired from Atlanta this summer, Huerter is competing with Malik Monk and Terence Davis for the starting nod.

“The more I watch, I just think Kevin might be the right fit at that two-guard spot,” Brown said. “But for me, right now, that power forward spot can be wide open.”

The list of the candidates at the ‘four’ spot includes lottery pick Keegan Murray. KZ Okpala, Trey Lyles and Chimezie Metu are the other options.

We have more info from the Western Conference:

Appearing on The Hoop Collective (video link), Brian Windhorst’s podcast, ESPN’s Andrew Lopez said Pelicans star Zion Williamson is “ready to go” for the 2022/23 season. Williamson, who missed all of last season after undergoing surgery and subsequently experiencing setbacks from a broken foot, has been working out with his trainer as opposed to the team’s staff since he was cleared to play with no restrictions at the end of May, Lopez added.

“He is now working with Jasper Bibbs, his strength and conditioning coach, he has a chef, he has taken steps to improve his body so we don’t have a situation where he is only playing 85 games in a three-year stretch, or missing an entire season,” Lopez said.

In an interview last week with William Guillory of The Athletic, Bibbs said Williamson was in “fantastic shape” and “a better athlete now than he’s ever been.” The former No. 1 overall pick signed a five-year, maximum-salary extension in July, and will reportedly be required to undergo regular weigh-ins throughout the duration of his new contract due to a conditioning clause.

The Pelicans have been granted a disabled player exception for Kira Lewis‘ season-ending ACL injury, reports Will Guillory of The Athletic (Twitter link).

A salary cap exception designed to give teams extra flexibility when a player suffers a major injury, the disabled player exception can be used to sign a free agent, to claim a player off waivers, or to acquire a player in a trade. However, it can only be used on a single player and can only accommodate a player on a one-year deal. A free agent signee can’t get a multiyear contract, and any trade or waiver target must be in the final year of his contract.

The DPE is worth half the injured player’s salary if that amount is less than the non-taxpayer mid-level exception. Lewis is earning a relatively modest $3,822,240 salary this season, so the Pelicans’ new DPE is worth just $1,911,120, which will limit the team’s options.

A disabled player exception also doesn’t create an extra roster spot, so if New Orleans wants to make use of its DPE, it will need to have an open spot on its standard roster.

Meanwhile, the Bulls – who applied for a disabled player exception in response to Patrick Williams‘ left wrist injury – have had their request denied, according to Shams Charania of The Athletic (Twitter link).

In order for a team to be approved for a DPE, its injured player must be deemed by a league-approved physician to be “more likely than not” to be out through at least June 15.

In Williams’ case, the Bulls announced a four-to-six month recovery timeline when the forward underwent wrist surgery in October, and reports have indicated he could be back during the postseason. In other words, he’s not considered likely to remain sidelined through June 15, which is presumably why Chicago’s request wasn’t granted.

Pelicans Apply For DPE Due To Lewis Injury

The Pelicans have applied for a disabled player exception due to Kira Lewis‘ season-ending knee injury, Will Guillory of The Athletic tweets.

Lewis suffered a torn ACL and a Grade 2 MCL sprain in his right knee earlier this month against Denver.

In Lewis’ case, he’s making $3,822,240 this season, so the DPE would be worth approximately $1.91MM. It could be used to sign a player to a one-year deal or to acquire a player via trade or waiver claim, if he’s in the final year of his contract.

Pelicans’ Kira Lewis Jr. Out For Season With Torn ACL

Second-year Pelicans guard Kira Lewis Jr. is out indefinitely after suffering a torn ACL and a Grade 2 MCL sprain in his right knee, the team announced (Twitter link). The injury occurred in Wednesday’s game against Denver and a subsequent MRI confirmed it. A surgery date has not been set. 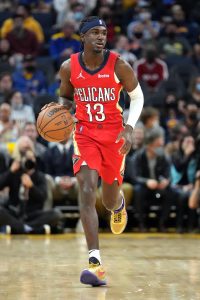 A torn ACL typically has a recovery timeline of 12 months or more, and considering Lewis suffered a MCL sprain as well, it could be a bit longer than that. The team didn’t say it outright, but Lewis will miss the rest of the 2021/22 season.

It’s a very unfortunate setback for the 20-year-old, who’d been playing better recently. Executive VP of basketball operations David Griffin is known to be high on Lewis and has reportedly pushed for more playing time for him in the past.

The Pelicans have picked up rookie-scale options on four players, including Zion Williamson, the top overall pick in 2019, the team announced in a press release. New Orleans exercised the fourth-year option for Williamson, guaranteeing his $13.5MM salary for the 2022/23 season.

It’s a routine move that sets the stage for next summer, when Williamson will be eligible for an extension that could tie him to the franchise for an additional five seasons. Although those offers are nearly always accepted, there have been rumblings that Williamson might consider turning it down because of pressure from family members to play elsewhere and an uneasy relationship with head of basketball operations David Griffin.

The Pelicans also exercised fourth-year options on guard Nickeil Alexander-Walker ($5MM) and center Jaxson Hayes ($6.8MM). Point guard Kira Lewis had his third-season option picked up, which will pay him $4MM for 2022/23.