This marks the first career overseas stint for Simmons, who went undrafted in 2017 after spending one collegiate season at Arizona. He’s made past NBA stops with the Grizzlies, Cavaliers and Hornets.

Simmons appeared in 15 G League games with the Greensboro Swarm last season, averaging 18.3 points, six assists and 32.9 minutes per contest. The 24-year-old was also one of the top performers in the G League during the 2019/20 season, holding per-game averages of 17.4 points and 5.6 assists.

Simmons played 32 NBA games with Memphis in 2017/18 and one game with Cleveland in 2018/19. He was with Portland for summer league last month.

3:12pm: As noted as a possibility below, the Hornets have converted Simmons’ contract to a two-way deal, per an official release from the team.

3:10pm: Per Shams Charania of The Athletic and Stadium, Hornets rookie forward Jalen McDaniels, who just last night had his non-guaranteed one-year deal converted to a two-way contract, has now agreed to sign a partially guaranteed multi-year deal with the Hornets to finalize Charlotte’s 15-man roster.

Per Charania’s report, it appears that the Hornets will either waive Kobi Simmons or convert his deal to a two-way contract, but there has yet to be a report on that front. If Simmons is converted to a two-way deal, he’ll join Robert Franks as the team’s two two-way players to begin the 2019/20 season.

It appears that Martin, whose twin brother Cody Martin was selected by the Hornets in the second round of this year’s draft, will remain on the same roster as Cody after playing with him at Nevada as well.

While Martin and Robert Franks are occupying the Hornets’ two-way slots for the time being, that could change. Rod Boone of The Athletic tweeted earlier today that Kobi Simmons and Jalen McDaniels, who are currently on non-guaranteed contracts, are candidates to get two-way deals in Charlotte. Boone also hears that converting Martin to a two-way deal may be a procedural move to get him back on the regular roster on a new standard contract (Twitter link).

For now, the Hornets have 17 players under contract — 13 on guaranteed salaries, Simmons and McDaniels on non-guaranteed deals, and Martin and Franks on two-way pacts.

SEPTEMBER 16: The Hornets have signed Simmons to their training camp roster, the club confirmed today in a press release.

Although Charania doesn’t go into detail on the terms of Simmons’ deal, he notes that the 22-year-old will get a chance to compete for a regular season roster spot in training camp, so it figures to be a non-guaranteed Exhibit 10 pact.

Simmons, who went undrafted out of Arizona in 2017, spent his first professional season on a two-way contract with the Grizzlies. He appeared in 32 NBA games for the club in his rookie year, averaging 6.1 PPG, 2.1 APG, and 1.6 RPG in 20.1 minutes per contest.

After being waived by Memphis last August, Simmons spent most of the 2018/19 season with the Canton Charge, Cleveland’s G League affiliate. He recorded 17.2 PPG, 3.5 APG, and 3.7 RPG in 35 NBAGL games, making one brief NBA appearance for the Cavaliers after signing a 10-day contract with the club in January.

Once they officially sign Simmons, the Hornets will have 20 players under contract. Only 13 of Charlotte’s players have guaranteed salaries for 2019/20, so there will be one or two roster spots up for grabs. Simmons figures to compete with fellow camp invitees Joe Chealey, Caleb Martin, Josh Perkins, and Thomas Welsh — Chealey and Perkins, both point guards, may represent his direct competition.

With Kawhi Leonard gone from Toronto, veteran big man Marc Gasol becomes even more important to the Raptors’ success this season and beyond than he was during the team’s memorable run to a title during the 2018/19 campaign, writes Jonathan Tjarks of The Ringer.

With Leonard back home in California, forward Pascal Siakam becomes the undisputed future of the Raptors, with his development into a star of paramount concern for Toronto’s long term outlook. And as Tjarks analyzes, Siakam is at his best – or at least was last year – when playing alongside Gasol.

For one, Siakam loves to put the ball on the floor and attack the rim, so it’s important to play him with a center who can shoot well enough from the outside to drag Siakam’s defender out of the paint.

Additionally, Siakam is not yet an elite play-maker, so it helps to have other players like Gasol around him who can keep everyone else involved in the offense while Siakam plays in attack mode.

Finally, Gasol provides a large body that Toronto can use during the regular season to bang with big Eastern Conference centers like Joel Embiid over the course of an 82-game season. As Tjarks analogizes, Gasol essentially acts as a lead blocker for Siakam, clearing obstacles for Siakam to thrive.

Per Bobby Marks of ESPN, all unsigned 2019 second-round draft picks become free agents if not given a required tender by today, so the Hornets had to make a decision as to whether they wanted to retain McDaniels’ rights after drafting the San Diego State product No. 52 overall in the 2019 NBA Draft.

As we noted earlier today, the Hornets have already agreed to sign rookie guard Ahmed Hill to the team’s second two-way contract, and with the expected addition of point guard Kobi Simmons, Charlotte will have a full 20-man offseason roster without McDaniels. As such, the team may no longer be interested in bringing the rookie to training camp this season.

However, as Bonnell notes, two-way contracts can be a fluid situation, so if Charlotte wants to sign McDaniels to a two-way contract later (perhaps when his legal troubles are more thoroughly settled), the team could easily move on from Hill or fellow two-way recipient Robert Franks.

FEBRUARY 4: The trade is now official, according to press releases issued by the Blazers and Cavs. According to Cleveland’s announcement, the two picks included in the deal are Portland’s own 2021 and 2023 second-rounders. The Cavs also confirmed they waived Simmons from his 10-day contract to clear the necessary roster spot. 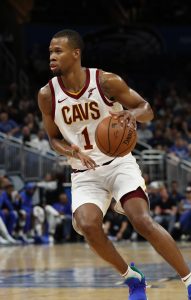 “Rodney is an accomplished NBA player that brings versatility, shot making and depth to our perimeter and will fit seamlessly into our culture and style of play,” Blazers president of basketball operations Neil Olshey said in a statement.

The Cavs must release one player to make the trade work, with 10-day contract guard Kobi Simmons being a potential candidate. Cleveland will continue to explore the market for Alec Burks, who could be on deck for a trade, Wojnarowski adds. J.R. Smith also remains on the roster several weeks after he and the team mutually agreed to part ways.

Hood, 26, had to approve of the trade because he signed a one-year qualifying offer last offseason, as noted by Wojnarowski. He was enthusiastic enough about joining the Blazers to waive his Bird Rights, now focused on helping Portland advance as the postseason nears.

For Portland, Hood is expected to provide bench scoring behind the likes of Damian Lillard and CJ McCollum, currently holding per-game averages of 12.2 points, 2.5 rebounds and two assists. He’ll be a free agent on July 1. The Blazers (fourth in the West at 32-20) also freed up a roster spot with the agreement.

Stauskas and Baldwin join the Cavaliers as two younger guards who will enter unrestricted free agency this July. Baldwin struggled shooting the ball (30% from the floor and 22% from 3-point range) in limited minutes with the Blazers this year, while Stauskas has shot a career-best 42% from the floor and pedestrian 34% from deep on the season.

With the trade, Cleveland has essentially turned Hood, Kyle Korver, George Hill and Sam Dekker into one first-round pick and six second-round picks for the future, ESPN’s Bobby Marks tweets. The first round pick is protected in 2021.

The NBA’s annual trading deadline falls on Thursday, February 7 this year. Today’s deal between the Cavaliers and Blazers is the 10th different trade of the 2018/19 season.

Here are Saturday’s assignments and recalls from around the NBA G League:

Here are Thursday’s assignments and recalls from around the NBA G League: