The Heat had calls from teams wanting to trade for Josh Richardson this summer, but Miami isn’t looking to move him, according to Manny Navarro and Barry Jackson of The Miami Herald. The organization wants Richardson to take a larger role on offense, with team president Pat Riley telling him that he should be able to average 18 points per game.

Richardson put up a career-best 12.9 PPG last season while shooting .375% from 3-point range. The authors say Richardson has been concentrating on shooting off the dribble and creating his own shot during offseason workouts.

Teams may have been trying to take advantage of the Heat’s desire to shed salary, but Richardson has an affordable deal that will pay him nearly $42MM over the next four seasons, including an $11.6MM player option in 2021/22. If he is able to increase his scoring numbers, Richardson’s contract might look like a bargain.

Navarro and Jackson pass along some more Heat info in the same piece:

The Cavaliers have reached out to free agents Luke Babbitt and Trevor Booker as they try to fill three open roster spots, according to Joe Vardon of Cleveland.com.

Cleveland saw its salary commitments for 2018/19 take a huge dive when LeBron James signed with the Lakers, but the Cavs still have a payroll of about $109.5MM. That’s over the $101.9MM salary cap, but about $20MM below the tax apron with the full mid-level exception ($8.6MM) and bi-annual exception ($3.3MM) still available.

Babbitt, 29, split last season between the Hawks and Heat. A career 40% shooter from 3-point range, Babbitt’s production fell after a February trade to Miami and he was barely used in the playoffs. Several European teams have expressed interest in signing him if he doesn’t land another NBA contract.

Booker, 30, spent parts of last season with the Nets, Sixers and Pacers. A rugged power forward, Booker had his best season in 2016/17, when he averaged 10.8 PPG and 8.0 RPG for Brooklyn.

No deal is considered imminent with either player, Vardon adds.

One of the Cavaliers’ open roster spots may be reserved for Rodney Hood, who had trouble adjusting to his new role after coming to Cleveland at the trade deadline but is still a valued prospect. He remains part of the plan for the future, a team source told Vardon. Hood is a restricted free agent, and the Cavs can match any offer he receives.

The source adds that Cleveland is “exploring all options” with its resources, including a $5.8MM trade exception from last summer’s Kyrie Irving deal that will expire August 22.

In addition, Vardon relays that there’s nothing new on a rumored trade that would send Kyle Korver to Philadelphia in exchange for Jerryd Bayless. The Cavs may see if they can get more for the 37-year-old marksman before dealing with the Sixers.

Veteran forward Luke Babbitt is drawing interest from several EuroLeague teams, according to Orazio Cauchi of Sportando. Barcelona and Maccabi Tel Aviv are among the clubs that have checked on Babbitt, Cauchi adds.

Babbitt, 29, started this season with the Hawks before being traded to the Heat at the February deadline. He appeared in 50 total games and averaged 5.2 PPG, but his numbers declined after coming to Miami, where he averaged just 11.2 minutes per night. He was used for just three total minutes in the playoffs.

The 16th pick in the 2010 draft, Babbitt has spent his entire career in the NBA except for a brief overseas excursion during the 2013/14 season. He signed with Nizhny Novgorod in Russia, but left after a few months.

The Heat are missing three shooting guards because of injuries, but coach Erik Spoelstra won’t consider using Dwyane Wade as a starter, writes Barry Jackson of The Miami Herald. Just as he did in Cleveland before being traded, Wade has become the leader of the reserves and his coach doesn’t want to take him out of that role.

“I want [Wade] to get as comfortable with that second unit as possible,” Spoelstra said. “That to me is a dynamic, game-changing lineup that I want them to continue to gain confidence in, get more comfortable with.”

Wade agrees with Spoelstra’s decision, saying he needs to get used to working with his new teammates. He is averaging 13.6 points in seven games since returning to Miami.

1:31pm: The trade is now official, according to a press release from the Heat. Atlanta intends to waive White, according to Michael Cunningham of The Atlanta Journal-Constitution (Twitter link).

11:15am: The Hawks will trade veteran forward Luke Babbitt to the Heat for Okaro White, tweets Marc Stein of The New York Times.

This will be a return to Miami for Babbitt, who spent the 2016/17 season there. He signed a one-year, veterans’ minimum contract with the Hawks this summer and is averaging 6.1 points and 2.2 rebounds in 37 games.

White is in his second season with the Heat, but has appeared in just six games, spending most of the year in the G League. He also has a minimum deal, so salary matching won’t be a problem.

A larger trade could be in the works as Miami continues to talk with Atlanta about Marco Belinelli, tweets Barry Jackson of The Miami Herald. Belinelli would give the Heat another wing shooter after losing Dion Waiters for the season.

The Hawks were in the bottom half of the league in three-point shooting last season, but the team’s front office believes the addition of Luke Babbitt will help them improve in that area, as KL Chouinard of NBA.com relays.

“Luke is a proven veteran and adds another experienced player to our locker room,” GM Travis Schlenk said of Babbitt. “He is one of the premier long-range shooting big men in the league, has played a variety of roles over his career and will contribute to our team.”

“When I got the call, the first thing I thought of was Coach Bud. I’ve always respected what he did from afar,” Babbitt said. “I’m really excited to play for him and be with this young group of guys.”

The contract extension that 2015 second-round pick Josh Richardson is eligible for with the Heat would value him similarly to NBA role players Matthew Dellavedova and Cristiano Felicio, Ira Winderman of the Sun-Sentinel writes.

Considering that Richardson is an established high character rotation piece already familiar with the Heat’s system, such an investment wouldn’t exactly be excessive.

Through two seasons with the Heat, Richardson has averaged 8.4 points on .374 shooting from beyond the arc. His length and ability to contribute on the defensive end make him one of the team’s most well-rounded assets.

As we wrote earlier this week, Richardson may be wise to wait until the June 2018 deadline before making his decision. If he doesn’t accept the four-year, $42MM extension with the Heat he’ll be a restricted free agent come July 1, 2018.

AUGUST 9: The Hawks have officially signed Babbitt, the team confirmed today in a press release. 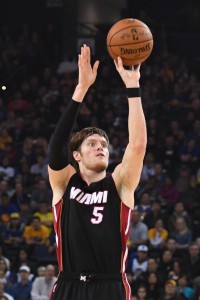 AUGUST 4: The Hawks have reached an agreement to sign free agent forward Luke Babbitt, reports Adrian Wojnarowski of ESPN (Twitter link). According to Wojnarowski, Babbitt will receive a one-year contract from Atlanta.

Michael Scotto of Basketball Insiders reports (via Twitter) that Babbitt’s one-year deal will be worth $1.9MM. The minimum salary in 2017/18 for a player with Babbitt’s experience is $1,974,159, so it sounds like it’ll be a minimum pact.

Babbitt, 28, spent last season with another Southeast team, averaging 4.8 PPG and 2.1 RPG in 68 games for Miami. Although Babbitt’s numbers were modest, he started 55 games for Miami and knocked down 41.4% of his three-point attempts, playing a role for the club during its 30-11 second-half run.

Few players have been as reliable from outside in recent years as Babbitt, who has made an impressive 43.8% of his long-distance attempts since the start of the 2014/15 season. He’ll bring that shooting touch to an Atlanta team that waived Mike Dunleavy Jr. earlier this summer.

Babbitt was one of five notable free agent forwards we identified as potentially intriguing investments earlier this week. The other four, including Dunleavy, remain on the open market.

While most of the biggest names still available on the free agent market are restricted free agents, there are several noteworthy unrestricted players who are free to sign outright with any NBA team. Over the last several days, we’ve identified a number of those players, examining five notable guards, wings, and big men who remain unsigned.

Today, we’ll close out our look at those notable remaining free agents by focusing on a handful of forwards who could appeal to NBA clubs. Some of these players could be considered wings or bigs, but we’ve split them off into their own category — these are frontcourt players who probably shouldn’t be relied on as the man in the middle of any lineup that’s not unusually small.

The Raptors, Hawks, Timberwolves, Pelicans, Spurs, and Hornets are among the teams that could potentially use a little more frontcourt depth, though those aren’t the only clubs who may be suitors for the players listed below.

Here are five notable free agent forwards to keep an eye on:

Note: Restricted free agents aren’t noted here, since they’re not free to sign with any team, but Nikola Mirotic and JaMychal Green are among the noteworthy RFA forwards still on the market.

Starting Thursday, the Heat will be able to offer a contract extension to third-year guard Josh Richardson, writes Barry Jackson of The Miami Herald. The offer can be as much as $43MM over four years, and Richardson would have until the start of the regular season to accept it. If he doesn’t, he will become a restricted free agent next summer.

Richardson has been valuable when he’s been in the lineup, but he was limited to 53 games last year because of injuries. Knee surgery forced him to miss training camp and the first four regular season games, then ankle problems sidelined him in midseason.

Jackson expects the Heat to offer at least $30MM over three years, with a player option for the final season. Given the decline in money going to mid-level free agents this summer, Richardson might find that offer appealing.

Here are some more Heat-related notes, courtesy of Jackson: