The Nuggets have recalled rookie center Bol Bol from the G League but they’re not burning any of the 45 days he’s allotted to spend in the NBA on his two-way contract, according to Mike Singer of the Denver Post.

Bol is expected to remain with the Nuggets for a couple of weeks but won’t practice or play before being sent back down to the Windy City Bulls. He’ll be listed as out due to “injury management” for his surgically repaired left foot, Singer adds. Bol has averaged 11.5 PPG, 6.5 RPG and 2.3 BPG in less than 17 MPG with Windy City.

We have more on the Nuggets:

Every week, Hoops Rumors takes a closer look at players who will be free agents or could become free agents next offseason. We examine if their stock is rising or falling due to performance and other factors. This week, we take a look at players from the Northwest Division: 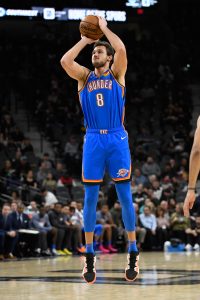 Danilo Gallinari, Thunder, 31, SF (Up) – Signed to a three-year, $64.7MM deal in 2017
Gallinari’s biggest issue has been staying out of the trainer’s room. His 68 regular-season appearances with the Clippers last season was his most since the 2012/13 season. But when he’s healthy, he can fill it up. He’s averaging 19.1 PPG and 5.1 RPG while shooting 41.3 percent from deep. When he gets to the free throw line, he’s money (at least 90 percent since 2016/17). At 31, Gallinari still has a few more good years left and will get a hefty long-term offer next summer.

Mason Plumlee, Nuggets, 29, C (Up) – Signed to a three-year, $41MM deal in 2017
Plumlee doesn’t stretch defenses like a majority of big men these days but he does enough to stay on the court. He’s the team’s fourth-leading rebounder despite averaging 16.6 MPG. He’s also adept at finding teammates (2.3 APG). Plumlee’s role figures to diminish if 2018 first-round Michael Porter Jr. starts to make a bigger impact but for now, Plumlee has a steady second-unit role on a contender. However, his annual salary will take a big dip next summer.

Jordan Bell, Timberwolves, 24, PF (Down) – Signed to a one-year, $1.62MM deal in 2019
The Timberwolves can make Bell a restricted free agent by extending a $2.0MM qualifying offer in June. Thus far, Bell hasn’t done anything to make them want to keep the former Warriors big man around for another season. He’s been glued to the bench through the first month of this season, playing a total of eight minutes since November 4th. Noah Vonleh and Gorgui Dieng are ahead of him in the rotation off the bench, so Bell’s role won’t expand unless injuries strike.

Kent Bazemore, Trail Blazers, 30, SG (Down) – Signed to a four-year, $70MM deal in 2016
Bazemore was acquired from the Hawks in exchange for another veteran swingman, Evan Turner. The trade has been a lose-lose situation for both teams. Neither has made an impact on their current teams. Bazemore is averaging single digits for the first time since the 2014/15 season despite steady playing time (23.6 MPG). He’s shooting 34.6 percent from the field and his PER is 8.7. That’s not exactly the way Bazemore wanted his walk year to unfold. He’ll be settling for a sizable pay cut next summer.

Jeff Green, Jazz, 33, PF (Down) – Signed to a one-year, $2.56MM deal in 2019
Green is the quintessential journeyman, seemingly popping up on a different team every season. Normally, he puts up solid numbers wherever he lands. That hasn’t the case through the first 14 games this season. Green has been in a shooting slump, making just 33 percent of his attempts. He shot over 47 percent for Cleveland and Washington the past two seasons, so a breakout might be imminent. If not, Green’s rotation spot could be in jeopardy when Ed Davis‘ fractured leg heals.

Jerami Grant is expected to start the season as the Nuggets’ backup power forward but he’ll also see time at center, Mike Singer of the Denver Post reports. Grant was traded by the Thunder to Denver for a first-round pick.

“I think Jerami Grant can play (center),” Nuggets head coach Michael Malone said. “Jerami’s ability to screen and roll, finish around the basket, catch passes in traffic and make plays from that, he’s really, really good in that regard.”

A small-ball lineup with Grant at center would cut into Mason Plumlee’s minutes in the Nuggets’ frontcourt, Singer notes.

Team USA got the test it was hoping for in today’s exhibition matchup with Australia, writes Tim Reynolds of The Associated Press. Playing before more than 51,000 fans in Melbourne, the Americans trailed briefly in the second and third quarters before pulling away for a 102-86 victory.

“One of our big mantras has been ‘composure and poise,’” coach Gregg Popovich said. “Things are going to go the other way in some games. And the way you respond to that is really the measure of how you’re going to do.”

Popovich put together a challenging exhibition schedule to test his team before World Cup play officially starts at the end of the month. After facing second-ranked Spain last week, Team USA is playing a pair of games against Australia, then taking on Canada.

USA Basketball has issued a press release announcing a series of updates relating to the team it’s putting together for the 2019 World Cup in China, as well as the training camp that will take place in August before that event. Here are the highlights of that announcement:

Nuggets big man Paul Millsap has joined the ever-growing list of players from Team USA’s initial 20-man roster who have decided not to participate in this year’s World Cup. As expected, Cavaliers power forward Kevin Love has also withdrawn from Team USA’s 2019 roster.

In addition to those four players, two big men will join the roster as well, with Clippers center Montrezl Harrell and Nuggets center Mason Plumlee have received invitations from USA Basketball. Assuming the remaining 11 players from the original 20-man roster remain committed, that would bring the roster back up to 17.

[UPDATE: Harrell may turn down his invitation]

It’s possible that a player could be elevated from the Select Team to the primary roster and eventually find his way onto the 12-man squad that will play in China, but that’s probably a long shot.

The 13 players who will play for the Select Team are as follows:

Team USA’s training camp will take place during the week of August 5, while the World Cup itself is scheduled to run from August 31 to September 15.

Isaiah Thomas hasn’t played since signing with the Nuggets over the summer, but he is having a huge impact on the team, writes Mike Singer of The Denver Post. Thomas has become a mentor to younger players and a vocal leader on an otherwise quiet team.

“To have his voice in our locker room, to help some of these younger guys out, it takes a lot of load off myself,” said Paul Millsap, the only other player on Denver’s roster older than 30.

Thomas expects to return soon from a lingering hip injury and hopes to re-establish himself after a nightmarish 2017/18 season that began with a trade out of Boston, where had become a fan favorite and an MVP candidate. He missed his first two months in Cleveland, then took the blame for the team’s defensive and chemistry problems when he did start playing. The Cavaliers shipped him to the Lakers, who elected not to re-sign him when the season ended.

“For my wife and my family, it’s definitely been difficult,” Thomas said. “At the end of the day, I’m human. I’ve been three places in less than one year, so it’s like, I’m tired of moving.”

Thunder guard and former NBA MVP Russell Westbrook underwent arthroscopic surgery on his right knee earlier this week. The procedure was described as “maintenance” and he will be re-evaluated in four weeks. Westbrook is expected to miss the preseason but his status for Oklahoma City’s season opener on October 17 is to be determined.

Westbrook is coming off another outstanding season for the Thunder as he averaged a triple-double for the second consecutive season. As The Oklahoman details, Westbrook’s injury already has had ripple effects on the Thunder roster and will continue to do so until his impending return.

Clint Capela‘s new five-year contract with the Rockets on Friday, initially reported to be worth $90MM, is technically guaranteed for $80MM with $10MM in incentives, Shams Charania of Yahoo Sports tweets. Those annual incentives include $1MM for reaching the Western Conference finals, $500K for finishing with a 30% defensive rebounding rate, and $500K for shooting at least 65% from the free throw line, according to Tim Bontemps of the Washington Post (Twitter link).

With a potentially huge luxury tax bill looming, the Nuggets are hoping to find someone willing to take on the contracts of Wilson Chandler, Darrell Arthur or Kenneth Faried, tweets Marc Stein of The New York Times. He adds that Denver isn’t finding many interested teams and may have to put center Mason Plumlee on the trade block too.

Chandler contributed to the cap crunch when he decided to opt in to the final year of his contract at $12.8MM for next season. Combined with a sizable new deal upcoming for Nikola Jokic and the apparent decision to re-sign free agent Will Barton, the Nuggets could have a team salary in excess of $140MM, well above the projected $123MM luxury tax threshold for 2018/19.

Denver can reduce that figure by unloading Faried, who will make nearly $13.8MM next season, or Arthur, whose salary is set at nearly $7.5MM. Both are on expiring contracts, as is Chandler. Plumlee has two years left on his current deal at $12.9MM and $14MM.

Nuggets big man Mason Plumlee has undergone a successful surgical procedure to repair a core muscle injury, the team announced today in a press release. According to Gina Mizell of The Denver Post (Twitter link), Plumlee played through the injury for a significant chunk of the 2017/18 season.

Plumlee is expected to resume basketball-related activities at some point this summer, and should be back to 100% by the time the Nuggets open training camp in September, per the club.

Plumlee, 28, signed a three-year, $41MM contract with Denver during the 2017 offseason, so he remains under contract with the club for two more years before becoming eligible for free agency again in 2020. The former Duke standout saw his playing time cut back in 2017/18, averaging a career-low 7.1 PPG to go along with 5.4 RPG and 1.9 APG in 19.4 minutes per contest.

With Nikola Jokic and Paul Millsap set to return as the Nuggets’ starting frontcourt for 2018/19, Plumlee figures to continue playing a backup role at center going forward, as long as everyone stays healthy.