Bucks superstar Giannis Antetokounmpo has full faith in general manager Jon Horst’s decision-making as the trade deadline approaches, he told Eric Nehm of The Athletic in a wide-ranging interview.

“I feel really good about this team,” Antetokounmpo said. “I feel this team has a chance to win a championship and that’s all you can ask for. Now, what Jon’s going to do, that’s in his hands. He’s really good at his job. GM of the Year in 2019. He’s made incredible trades, some of those trades helped us win a championship. We’ve just got to trust him. We’ve got to trust his judgment and what he sees and what he feels.”

Gary Trent Jr. has been one of the hot names on the rumor mill due to the Raptors guard’s ability to opt out and become a free agent this summer. However, it’s no lock that the Raptors will trade him, according to Michael Grange of Sportsnet.ca.

The organization has been impressed with Trent’s professionalism and production after enduring an early-season shooting slump. The Raptors have signaled they are willing to re-sign him and Grange’s sources indicate Trent would like to re-sign with them during the offseason. Trent is likely to decline the $18.56MM option on the final year of his three-year contract.

We have more Eastern Conference news:

Hawks point guard Trae Young was ruled out of Wednesday’s game against Brooklyn due to a left calf contusion, per Lauren L. Williams of The Atlanta Journal-Constitution (Twitter link). Starting small forward De’Andre Hunter will also be sidelined for the second straight game with a left ankle sprain.

The Heat have been unable to play their full roster this season due to injuries. What could happen if the Heat get at or near full strength?

Ira Winderman of the South Florida Sun Sentinel explores that question. Gabe Vincent, who has seen some playing time as the backup point guard, could be pushed further down the bench. Coach Erik Spoelstra would have to choose between Max Strus and Duncan Robinson as the backup wing and Haywood Highsmith could also be on the rotation bubble.

The Heat could look to deal backup center Dewayne Dedmon and his expiring contract, along with another player, for some immediate help. In that scenario, Orlando Robinson could be a stopgap as the main reserve until Omer Yurtseven is able to return from ankle surgery.

We have more on the Heat:

Ben Simmons will miss his sixth game this season on Wednesday due to a sore left knee. Nets point guard Kyrie Irving said Simmons’ absences impact the club in many ways, Brian Lewis of the New York Post writes.

“When he’s not out there we don’t have our point forward, our point guard, being able to initiate easy opportunities, push the ball in transition; so we’ll definitely miss him in the lineup,” Irving said. “Hopefully he comes back [soon], but if he’s dealing with it we just want him to get as healthy as possible and we’ll figure it out.”

Victor Oladipo is traveling with the Heat during their four-game road trip, which starts with Wednesday’s contest at Toronto, but that was more about helping him feel involved with the team rather than an indication that a return is imminent, writes Anthony Chiang of The Miami Herald. The veteran shooting guard has yet to play in the 2022/23 regular season due to left knee tendonosis, and his future availability remains murky.

“Just time will tell,” Oladipo said when asked about a return timetable. “When I feel right and everybody’s on the same page, then I’ll be ready to play.”

According to Chiang, Oladipo acknowledged that the injury may have been a result of “overwork,” which head coach Erik Spoelstra previously characterized as “overcompensation.” The 30-year-old has undergone a couple of right knee surgeries in the past few years, and apparently put extra strain on his other leg while ramping up to play this season.

“I think it’s more of a making-sure thing, and then taking the proper steps before going out there, instead of just going out there recklessly,” Oladipo said when asked if pain remains in his left knee. “As long as we’re all on the same page, we’re trying to make sure that I get out there as safely and as great as possible. That’s what we’re working on.”

Here a few more health-related updates on the Heat:

As expected, Heat center Omer Yurtseven underwent surgery on his left ankle Tuesday. The team announced in a press release that the procedure, which was completed in Miami, addressed an impingement, bone spur, and stress reaction in Yurtseven’s ankle.

As Ira Winderman of The South Florida Sun Sentinel tweets, Yurtseven said on Monday that a recovery timeline had yet to be established. That still appears to be the case — all the Heat said in today’s statement was that the big man will be reevaluated “at a later date.”

A report on Sunday indicated that Yurtseven would likely be out for at least three months or so, suggesting there’s still hope that he’ll be able to return this season, perhaps by March.

Here are a few more notes on the Heat:

Heat center Omer Yurtseven is expected to undergo surgery on his injured left ankle this week, barring a last-minute change in plans, reports Anthony Chiang of The Miami Herald.

As we relayed on Thursday, Yurtseven is reportedly dealing with a bone spur issue in his ankle and was weighing the possibility of a surgical or non-surgical approach to the injury, having sought out multiple opinions. While the 24-year-old would likely be facing an extended absence either way, there was a belief that undergoing surgery could end his season.

According to Chiang, there’s now hope that Yurtseven will stay be able to play this season even if he goes under the knife. The expectation is that the big man be sidelined for about three months after surgery, meaning he’d have a chance to return by March.

Yurtseven has yet to play at all in 2022/23 after suffering his ankle injury during the preseason, but was productive when given playing time as a rookie last season. During one 10-game stretch as a starter with Bam Adebayo sidelined, he averaged 13.6 points, 13.5 rebounds, 2.9 assists and 1.0 steal in 30.9 minutes per contest.

Yurtseven is in a contract year and will be eligible for restricted free agency in the summer of 2023.

Having Yurtseven unavailable until well into the second half of the season will leave the Heat a little shorthanded, since they’re only carrying 14 players due to luxury tax concerns and aren’t particularly deep at center.

Dewayne Dedmon has been a regular contributor off the bench when healthy this season, while Udonis Haslem has also gotten into a couple games. Head coach Erik Spoelstra has leaned a little more heavily on Adebayo, who’s averaging a career-high 34.9 minutes per night so far.

Heat second-year center Omer Yurtseven, who injured his ankle during Miami’s first preseason game and has yet to make his regular season debut in 2022/23, is facing an “extensive” recovery timeline, writes Ira Winderman of The South Florida Sun Sentinel. 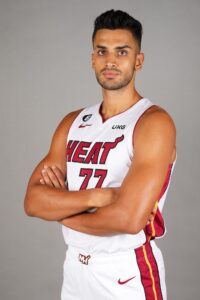 According to Winderman, there’s a chance Yurtseven might miss the entire season if he opts to undergo surgery, but even if he takes the non-surgical route, he’ll likely be out for an extended period. The Turkish big man is an impending restricted free agent, so surgery might be the safer choice to preserve his long-term health, Winderman writes.

The Heat have been listing Yurtseven as out with a left ankle impingement, but a source familiar with the injury tells Winderman that it appears to be a bone spur that’s been so problematic for the 24-year-old. Yurtseven continues to seek opinions on the exact nature of the injury, Winderman adds.

The injury wasn’t initially believed to be serious, yet it has continued to bother Yurtseven.

“They said structurally [it’s fine],” Yurtseven said last month. “I went to like five different doctors just to make sure everything was fine just to double, triple and quadruple check.”

Just a couple of weeks ago, Yurtseven was traveling with the team while rehabbing the ankle and hoped to return to action within a week. Obviously, that has not happened.

As Winderman observes, because the Heat are so close to the luxury tax line, even if Yurtseven were to undergo surgery and be ruled out for the season, and the Heat were subsequently granted a disabled player exception, they still wouldn’t be able to add a 15th man without going into the tax.

Yurtseven was very productive when given playing time as a rookie last season. During one 10-game stretch as a starter with Bam Adebayo sidelined, he averaged 13.6 points, 13.5 rebounds, 2.9 assists and 1.0 steal in 30.9 minutes per contest. Head coach Erik Spoelstra had said he planned to experiment with lineups featuring both Adebayo and Yurtseven prior to the injury.

After missing two straight contests for the Heat with left hip tightness, All-Star swingman Jimmy Butler is set to suit up for Miami tomorrow night against the Trail Blazers, reports Adam Lichtenstein of The South Florida Sun Sentinel.

With their best player sidelined, the Heat went 1-1. The club sports an underwhelming 4-6 record overall on the young 2022/23 NBA season.

“I think it’s good for us to be able to compete and have legitimate chances to win games while he was out,” head coach Erik Spoelstra said. “But yeah, he gives you a great emotional boost when he’s back. It was good to have him running around. He looked fully healthy to all of us. We’ll get him ready for tomorrow night.”

Butler is returning just in time, as the Trail Blazers have looked formidable thus far, with a surprising 6-3 record. Through his eight available contests for the club, the 33-year-old Butler has maintained his All-NBA output. He is averaging 21.5 PPG, 6.4 RPG, 5.5 APG and 1.5 SPG. The 6’7″ vet is also enjoying an excellent shooting season, boasting splits of .470/.391/.873.

Lichtenstein adds that Miami shooting guard Tyler Herro, diagnosed with a sprained left ankle, has been downgraded to questionable ahead of the team’s game against Portland on Monday.

Victor Oladipo remains unavailable as he continues to battle the left knee tendinosis that has restricted him thus far from the taking the court all year. Reserve big man Omer Yurtseven is also still sidelined due to a left ankle impingement.