Several former NBA stars are first-time nominees on the list of eligible players released Wednesday by the Naismith Basketball Hall of Fame.

Wade was a 13-time All-Star, an eight-time All-NBA honoree and a member of the 75th anniversary team that was selected last year. He is currently a part owner of the Jazz.

Nowitzki, also on the 75th anniversary team, is the highest-scoring foreign-born player in league history with 31,560 career points. He was named MVP in 2007 and was chosen as Finals MVP in 2011 after leading the Mavericks to their first championship. He set a league record by spending 21 years with the same franchise, made the All-Star Game 14 times and was an All-NBA selection 12 times.

Gasol captured back-to-back NBA titles with the Lakers in 2009 and 2010 and was the first non-American to be honored as Rookie of the Year. A six-time All-Star and four-time All-NBA selection, Gasol was also successful internationally, winning a FIBA World Cup, three EuroBasket titles and three Olympic medals with Spain.

Parker played a huge role in helping the Spurs win four NBA championships and was named Finals MVP in 2007. He was a six-time All-Star and four-time All-NBA selection, and was named MVP of EuroBasket in 2013 as France won the tournament.

Popovich holds the record for most wins by an NBA coach with 1,354. He guided the Spurs to five NBA titles and was named Coach of the Year three times.

Finalists for enshrinement will be announced February 17 during All-Star Weekend, and the Class of 2023 will be unveiled April 4 during the NCAA’s Final Four. The enshrinement ceremony is scheduled for August 12.

Lakers To Retire Pau Gasol’s No. 16 Jersey In March

The Lakers will retire Pau Gasol‘s No. 16 jersey on March 7, 2023, the team announced today in a press release. The Lakers will be playing host that night to the Grizzlies, the club that acquired Gasol in a draft-night trade in 2001 and eventually sent him to L.A. in 2008.

After being acquired by the Lakers in that blockbuster deal that landed his brother Marc Gasol in Memphis, Pau appeared in 429 regular season games for the franchise, averaging 17.7 points, 9.9 rebounds, 3.5 assists, and 1.4 blocks per game in 35.7 minutes per contest while shooting 52.2% from the floor.

Because he hasn’t played in the NBA since 2019, Gasol will be eligible to be part of the 2023 Hall of Fame class and has an excellent chance to be inducted. In addition to his impressive NBA résumé, Gasol also won several medals in international competition with the Spanish national team.

With a 27-49 record, the Kings are on track to miss any kind of NBA postseason for the 16th straight year. Sacramento currently sits at the No. 13 seed in the Western Conference, 4.5 games behind the tenth-seeded Spurs for a chance at a play-in tournament appearance. As the team’s opportunity to qualify for the play-in slips away, Jason Anderson of the Sacramento Bee wonders if top scorers De’Aaron Fox and Domantas Sabonis will return to the hardwood this year.

The Kings have just six games left on their schedule for the 2021/22 NBA season. Fox has missed the club’s last five games with right hand soreness, while Sabonis has sat for the last three due to a left knee bone bruise.

“Well, we’ll see,” interim head coach Alvin Gentry commented on the two Kings veterans’ availability this year. “They’re working out every day and they’re trying to get to the point where they can come back and play, so we won’t know that. It’s a day-by-day thing. I don’t know any other way to answer it but that. … Fox is on the [team’s current road] trip with us. He’s spending a lot of time working out and trying to see where it takes him.”

New York and San Francisco won’t be the only NBA cities with local COVID-19 vaccine mandates in place this season. According to Christopher Weber of The Associated Press, the Los Angeles City Council voted on Wednesday to approve one of the country’s strictest vaccine mandates. The ordinance will bar unvaccinated individuals from many indoor venues – including sports arenas – unless they receive a medical or religious exemption.

According to Tim Bontemps of ESPN (Twitter link), L.A.’s vaccine mandate – which goes into effect in November – will include the same non-resident performer exemption that is included in New York’s and San Francisco’s executive orders. That means, for NBA purposes, the mandate will apply to players on the Lakers and Clippers, but not to visiting players.

Fortunately for the two Los Angeles teams, no players currently on their rosters appears likely to be impacted. Both the Lakers and Clippers indicated during training camp last week that their rosters will be fully vaccinated for the start of the 2021/22 season. Still, the mandate is worth keeping in mind when the L.A. clubs are signing free agents or considering potential trades.

As expected, veteran big man Pau Gasol announced his retirement as a basketball player today at a press conference in Barcelona. 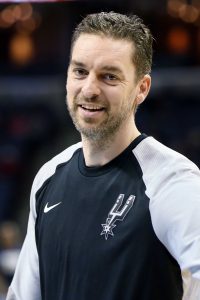 The third overall pick in the 2001 draft, Gasol began his NBA career with Memphis after playing for Barcelona in Spain from 1998-2001. He won the Rookie of the Year award in his first season and ultimately spent 18 years in the NBA with the Grizzlies, Lakers, Bulls, Spurs, and Bucks, averaging an impressive 17.0 PPG, 9.2 RPG, 3.2 APG, and 1.6 BPG in 1,226 regular season games.

Gasol appeared in another 136 playoff contests, posting 15.4 PPG, 9.2 RPG, 3.2 APG, and 1.7 BPG in those games for the Lakers, Spurs, Grizzlies, and Bulls. The 41-year-old is a six-time All-Star who won a pair of championships with the Lakers in 2009 and 2010, as well as three Olympics medals (two silvers and a bronze) for Spain. He also made the All-NBA team four times.

Gasol last appeared in an NBA game in March 2019, when he briefly played for Milwaukee. Since then, he has undergone multiple surgeries to repair stress fractures in the navicular bone in his left foot, which prevented him from making an NBA comeback — he signed with Portland for the 2019/20 season, but never suited up for the team for health reasons.

However, Gasol was able to return to action for Barcelona this past year, winning a Liga ACB title with the team in 2021 after having won championships in 1999 and 2001 with the club. He also played for Spain in the Tokyo Olympics before officially calling it a career. Following his retirement, Gasol appears on track for eventual enshrinement in the Basketball Hall of Fame.

Although Pau has been out of the league for a couple years, 2021/22 might be the first NBA season since 2000/01 that doesn’t feature at least one Gasol brother. Pau’s younger brother Marc Gasol isn’t currently on an NBA roster and is reportedly considering remaining in Spain this season.

Emoni Bates, who is considered the best high school prospect in the country, will reclassify into the Class of 2021  but still won’t be eligible for the NBA draft until 2023, writes Jeff Borzello of ESPN.

A 6’9″ small forward from Ypsilanti, Michigan, Bates committed to Michigan State last summer, but reconsidered in April. The Spartans are still among the options he is considering, along with Oregon, Memphis and the G League. Wherever Bates goes, he may stay for two years.

NBA draft rules require players to be a year removed from their high school graduating class and turn 19 in that calendar year. Bates’ 19th birthday isn’t until January of 2023.

Team USA has one Olympic loss already and now that the medal round is here, another defeat would end its gold medal hopes. The Americans will face Spain in the quarterfinals and Celtics forward Jayson Tatum could be the key to advancing, writes Joe Vardon of The Athletic.

Spain captured the FIBA World Cup in 2019, but Tatum played in just two games after being injured early in the tournament. He’s fully healthy now and has gotten over a slow start in the Olympics, scoring 27 points in Saturday’s rout of the Czech Republic.

“Our confidence never wavered,” said Tatum, whose team lost a pair of exhibition games in Las Vegas, then dropped its Olympic opener against France. “We understood that it wasn’t gonna be easy. We didn’t have our full team until four days ago, five days ago, so we knew that we had a lot of challenges ahead of us. And we also know that we would continue to get better every day. We would get better from each game, each practice, just the more time that we spent together, we were never going to be the same team, from day one, that we are now. And hopefully, we’re better this time next week than we were today.”

It’s been an unusual week for the Bucks’ Jrue Holiday and Khris Middleton and the Suns’ Devin Booker, who have gone from being Finals opponents to Olympic teammates in the span of a few days, writes Mark Medina of USA Today. Milwaukee wrapped the series Tuesday night, leaving the players with a tight schedule to get to Tokyo in time for Sunday morning’s opener against France.

Middleton admits he and Booker “haven’t said a word to each other” since the Finals ended, but he believes they’ll have a normal relationship during the Olympics.

“I think we’ll be fine,” Middleton said. “I’m sure we won’t be best buddies during Team USA, but we’ll be teammates, for sure. We’ll be on the same path, talking basketball X’s and O’s, trying to get the job done.”

Booker, who has called it “a life goal” to play in the Olympics, also doesn’t expect any hard feelings to linger from the Finals matchup.

“It’s never personal between who you’re going with, unless lines are crossed,” he said. “Those guys aren’t that type and I would never go that way with them, because there’s a high respect level for each other. I think that’s why we’re in the position that we’re in right now. Representing your country is a whole different dynamic than competing against each other in the NBA Finals, but I can always respect somebody that competes at the highest level.”

There’s more on the Olympic Games:

Veteran center Pau Gasol, who has represented Spain in four Olympic tournaments so far, remains on track to be part of the team in Tokyo, per an Associated Press report. Gasol was one of 18 players included on Spain’s preliminary roster for the Tokyo games, joining his brother – Lakers center Marc Gasol – and Timberwolves point guard Ricky Rubio.

Timberwolves forward Juan Hernangomez, Pelicans big man Willy Hernangomez, and projected first-round pick Usman Garuba are among the other notable names on Spain’s preliminary roster, according to The Associated Press.

Here’s more on the Tokyo Olympics:

A pair of longtime NBA big men returned to action in Europe this week after lengthy layoffs.

The most notable of the two, Pau Gasol, played for the first time in over two years on Friday, taking the court for Barcelona in EuroLeague play. He logged 13 minutes vs. Bayern Munich, recording nine points and four rebounds (AP story via ESPN).

Meanwhile, in Russia today, Khimki Moscow center Timofey Mozgov appeared on Monday in his first game in nearly three years, per Sportando. Mozgov was last on an NBA roster during the 2018/19 season, but he didn’t appear in a single game with Orlando that year due to knee issues.

Those issues persisted after Mozgov signed with Khimki in 2019, and the NBA even permitted the Magic to remove Mozgov’s cap hit from their books last season since his injury was viewed as potentially career-ending. His return today represents the culmination of a long, impressive comeback.