Joel Embiid turned in an MVP performance Saturday afternoon while matched up with Nuggets center Nikola Jokic, who has beaten him out for the award the past two seasons, writes Kyle Neubeck of The Philly Voice. Embiid posted 47 points, 18 rebounds and five assists and made several big plays late in the game to help the Sixers win the battle between two of the NBA’s best teams.

Embiid was a bit too focused on his individual matchup with Jokic early on, Neubeck observes, but he began to take over the game in the second quarter, showing off his full offensive arsenal. Many of Embiid’s points came via a two-man weave with James Harden that resulted in prime scoring opportunities.

Afterward, Embiid said he doesn’t have a personal rivalry with Jokic, but he felt it was “a little disrespectful” that he wasn’t named a starter when the results of this year’s All-Star voting were announced Thursday, relays Tim Bontemps of ESPN.

“I’m used to it,” Embiid said of the snub. “It’s not the first time. I think it’s more of a motivation to go out and win the whole thing. That’s the only way I’m probably going to get that respect.”

Warriors guard Stephen Curry and Sixers center Joel Embiid have each been fined $25K by the NBA for separate incidents, the league announced (Twitter links).

Curry, the reigning Finals MVP, was given a technical foul and ejected for tossing his mouthpiece with 1:14 remaining in Wednesday’s two-point victory over Memphis. As Kendra Andrews of ESPN writes, Curry was frustrated by an “ill-advised” three-point attempt by teammate Jordan Poole.

According to Andrews, the mouthpiece “ricocheted off the court and landed near the courtside seats” and Curry received his third career ejection (second in the regular season). The NBA’s press release states that he was fined for “throwing his mouthpiece into the spectator stands” (video link).

“It was a crucial time in the game, and the way that our season has gone, questions about a heightened sense of urgency … when you want something really bad … I reacted in a way that put myself out of the game and put the team in a tough place,” said Curry, who disagreed with the immediate ejection because his mouthpiece didn’t come in contact with anyone.

Embiid, meanwhile, was fined for “making an obscene gesture on the playing court” in the third quarter of Wednesday’s victory over Brooklyn. He was not penalized during the game for his D-Generation X-inspired celebration.

Sims had been out of the Knicks’ rotation in the five games leading up to Robinson’s thumb injury last week, while Hartenstein was playing backup center minutes. After Robinson went down, Sims was elevated to starter, while Thibodeau kept Hartenstein in his reserve role.

“I feel good about both guys,” New York head coach Tom Thibodeau said. “What gives us the best chance to win? It may change based on matchups… Jericho and Isaiah have been in the rotation, and that was one of the things that stood out when we were acquiring those guys was the rim protection. We felt both were capable.”

Leading up to the February 9 trade deadline, we’re keeping an eye on potential trade candidates from around the NBA. We’re continuing today with a handful of players who can become restricted free agents in the offseason if they are extended qualifying offers. The full list of 2023 restricted free agents can be found right here.

Like the rest of the players on this list, Reddish was a first-round pick in 2019, selected 10th overall out of Duke. He was a highly-touted prospect who has shown brief flashes of intriguing potential, but has struggled mightily with consistency, and his game hasn’t translated all that well to the pros.

The 23-year-old is earning $5.95MM in the final year of his rookie contract. The Knicks have reportedly “redoubled” their efforts to trade Reddish, and are said to be seeking second-round draft compensation for him.

I understand why the Knicks are hoping to get assets back after giving up a protected first-rounder to acquire Reddish from Atlanta last season, I just don’t view him as a rotational upgrade for the teams that are said to be interested in him, which includes the Lakers, Bucks and Mavericks.

Perhaps the Lakers will offer Kendrick Nunn and a second-rounder if they aren’t able to package Nunn for something more appealing, but that just seems like making a trade for the sake of doing something. Regardless, Reddish is likely to be on the move ahead of the deadline.

White was the seventh overall pick in 2019 out of North Carolina. Like Reddish and many other young players who enter the NBA after one college season, the combo guard has struggled with consistency in his first four seasons.

However, White’s circumstances differ from Reddish’s in other respects. He seemingly fell out of favor when the new front office regime took over in Chicago, as he was drafted by the previous lead basketball executive, Gar Forman.

White’s counting stats, minutes and production have declined since his sophomore season, which might give the impression that he hasn’t improved. But he has become a better ball-handler, a more willing passer and efficient scorer, and puts in a lot more effort on defense.

A report last week indicated White, who makes $7.4MM this season, could be shipped out of Chicago if the Bulls look for a roster upgrade.

Thybulle is one of the more unique players in the NBA. He’s among the top defensive players in the league, earning All-Defensive nods each of the past two seasons, but it’s challenging to keep him on the court at times due to his very limited offensive skills.

Specialists like Thybulle used to be much more common. They have fallen out of favor in recent years because players are more well-rounded than ever before, and opposing teams have gotten better at exploiting weaknesses.

That said, if the Sixers do end up trading Thybulle, I highly doubt it will be to just dump his salary to dodge the luxury tax. His strengths are so striking that he should still have positive value, perhaps to a young team that believes it can develop his offense. 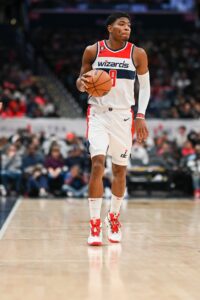 On the other end of the spectrum you have Hachimura, a talented scorer whose game is aesthetically pleasing because he can score in a variety of ways and plays with a physical edge offensively. However, he looks lost at times defensively.

When he’s on, Hachimura can look like a future star – there isn’t much you can do to stop him. The problem is, his jump shot runs hot and cold, he doesn’t get to the free throw line as much as you would expect, he isn’t much interested in passing, and he’s just an OK rebounder.

The Wizards have reportedly discussed Hachimura, who turns 25 next month, in potential deals, with some teams out West said to be interested. I get the sense that the Wizards are open to moving him more because they want to re-sign Kyle Kuzma in free agency rather than get rid of the former lottery pick. He could help a team in need of bench scoring.

Washington is one of those jack-of-all-trades, master-of-none types who would appeal to many teams around the league. The Hornets are pretty tight-lipped and there haven’t been any concrete rumors that they’re shopping Washington, just a couple of reports that there was a difference of opinion on the value of his next contract.

The thing is, I think he would still have positive trade value even if he was making close to the $20MM per year he was reportedly seeking instead of $5.8MM, which is his current salary. That’s more than I would personally want to pay him if I were a GM, but players that roughly fit the 3-and-D archetype are always in demand.

Washington met the starter criteria earlier this month, so his qualifying offer was bumped up to $8.5MM. I would be mildly surprised if he’s moved.

Should They Trade Thybulle?

With the Sixers‘ 2022/23 team salary just barely over the luxury tax line, there have been rumblings that the team will look to trade a non-rotation player to duck out of tax territory. Furkan Korkmaz, one player who has been cited as a candidate to be moved in such a deal, has heard the rumors, but is trying to not let them affect him, as Keith Pompey of The Philadelphia Inquirer relays.

“I just let those guys handle it — my agent, my organization-wise,” he said. “Right now, I don’t think it’s going to make a lot of sense for me to say anything about it, because it’s not in my hands at some point. … For me, the best thing that I can say is I want to be happy, you know? I want to be on the court. And whatever they think is working with the team, that’s fine with me.”

Korkmaz has been a rotation regular in Philadelphia over the last several years, averaging 20.8 minutes per game in 194 appearances during the three seasons prior to this one. In 2022/23, he has appeared in just 23 contests and averaged only 10.9 MPG.

Given his decline in production over the last year and the fact that he’s owed a guaranteed $5.37MM next season, Korkmaz wouldn’t be a positive asset on the trade market — especially since potential trade partners would recognize that the Sixers want to duck the tax, reducing Philadelphia’s leverage.

Sixers guard Tyrese Maxey is coming to terms with his new reserve role, writes Keith Pompey of The Philadelphia Inquirer. Maxey was demoted to a bench role in favor of the more defensively oriented De’Anthony Melton.

“Sometimes you have to be the bigger person,” Maxey noted “I feel like it was kind of trending that way. But I’m a professional at the end of the day.”