In his latest piece for ESPN.com, Zach Lowe takes an in-depth look at the culture Sean Marks has created in Brooklyn since he was hired as the Nets’ general manager.

As Lowe details, the Nets were leaning toward hiring Bryan Colangelo as their GM over Marks back in February 2016, but team chairman Dmitry Razumov heard from several respected execs who praised Marks during that All-Star weekend, and had a long talk with Spurs GM R.C. Buford that helped convince the franchise Marks was the man for the job.

Since joining the Nets, Marks has attempted to turn the club into one players want to be a part of, creating a “serious but welcoming” atmosphere, as well as a sense of closeness and community within the organization. The club has also prioritized sports science treatment, keeping its players on minutes restrictions and having them fill out daily questionnaires about sleep, soreness, and diet. “I could play another five years doing what they do,” said Randy Foye, who spent 2016/17 with the Nets.

Lowe’s entire piece on the Nets is worth the read, particularly for more of those tidbits on the work that Marks and head coach Kenny Atkinson have done to overhaul the team’s culture. Here are a few of the highlights from the story:

The Knicks made an effort to re-sign Langston Galloway over the summer, but the lure of returning to his home-state propelled the combo guard to join the Pelicans, Marc Berman of the New York Post writes. “I didn’t think I would leave [New York],’’ Galloway said. “But I had an opportunity to go home. That definitely was big, important for me and my family and wife. It’s definitely been great playing back home, loving the atmosphere New Orleans has.’’

Here’s more from the Big Apple:

The Raptors have two very difficult decisions looming in their pursuit of the top spot in the Eastern Conference, Tim Bontemps of the Washington Post opines. They must decide whether to go all-in this season in their quest to knock off the Cavs, which would mean trading off some young pieces for another impact player, preferable a power forward, Bontemps continues. The Magic’s Serge Ibaka and Hawks’ Paul Millsap — forwards that the Raptors have pursued in the past and will become free agents this summer — would be logical targets, in Bontemps’ view. This summer, they’ll have to decide whether to offer point guard and impending free agent Kyle Lowry a max five-year deal worth over $200MM or risk seeing him walk. Lowry will attract numerous suitors but his age — he turns 31 this spring — could make a long-term commitment a risky investment, Bontemps adds.

Brooklyn center Brook Lopez may see his production go down while point guard Jeremy Lin is sidelined with an injured hamstring, writes Brian Lewis of The New York Post. The Hornets packed their defense in the paint Friday to limit Lopez’s effectiveness, and he can probably expect to see more of the same. The Nets are reportedly listening to calls from teams interested in trading for Lopez, but are not actively looking to deal him. “It’s a huge adjustment [without Lin], no question, because he brings so much to our team,” Lopez said. “It was just a matter of giving Isaiah [Whitehead] confidence and letting him know that we’re all out there with him and have trust in him. It’s not just one of us on the floor.” Lin’s condition will be re-evaluated in two weeks.

There’s more news out of Brooklyn:

Jeremy Lin is trying to justify the Nets‘ $36MM investment by becoming a better shooter this offseason, relays Mike Mazzeo of ESPN.com. Lin, who accepted a three-year deal to leave Charlotte for Brooklyn, has altered his shooting style and is hoping for better results. Mazzeo notes that Lin’s percentage as a jump-shooter over the past four seasons is just 34.8%. “I’ve changed my form, brought my release lower and made the motion smoother in hopes of making it more consistent, creating a quicker release and using less energy so on nights when I’m tired I can still shoot it well,” Lin said. “I’ve also been working on my floaters and change of pace game because as I get older, I will rely less and less on my athleticism.”

Ray Allen is seriously considering a return to the NBA and Longtime Knicks fan Spike Lee has been trying to persuade Allen to sign with New York, Ian Begley of ESPN.com passes along. “Spike Lee has been trying to recruit me,” Allen said. “We’ve been texting.” Begley adds that it’s not clear whether the team has interest in bringing the shooting guard aboard. New York has 16 players under contract, as the team’s depth chart at Roster Resource indicates, though only 14 of those deals are fully guaranteed.

JULY 15, 1:07pm: The signing is official, the Nets announced via press release.

JULY 14, 12:05pm: After missing out on their top targets last week, the Nets continue to move on to alternate options in free agency. According to Adrian Wojnarowski of The Vertical (via Twitter), the team has reached an agreement on a one-year deal with shooting guard Randy Foye. 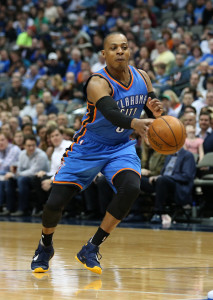 The Nets attempted to add some talent and youth to their backcourt early in free agency by signing Tyler Johnson and Allen Crabbe to offer sheets. However, the Heat and Blazers, respectively, matched those offer sheets, and Brooklyn has turned to veteran free agents since then, agreeing to deals with Greivis Vasquez, Luis Scola, and Anthony Bennett.

A former seventh overall pick, Foye has played for the Timberwolves, Wizards, Clippers, Jazz, Nuggets, and Thunder over the course of his 10-year NBA career. Last season, he appeared in a total of 81 games for Denver and Oklahoma City, averaging a career-low 5.9 PPG, and shooting just 30.0% from three-point range, also the worst mark of his career.

Foye is only three years removed from a 2013/14 campaign in which he started 78 games and averaged 13.2 PPG and 2.3 3PG, and at age 32, he should still have something left in the tank. Joining the Nets, whose roster isn’t exactly loaded with talent, could give him the opportunity to earn consistent playing time in 2016/17. If he has a bounce-back season, he could land a decent deal as a free agent in the summer of 2017, when the salary cap exceeds $100MM.

The Pelicans could still make a push for signing Rajon Rondo even after securing an agreement with E’Twaun Moore, John Reid of The Times Picayune writes. Reid acknowledges that there are other teams in the mix for Rondo and New Orleans appears to be a long-shot. There were conflicting reports on Friday as to whether the team was interested in Rondo.

Reid confirms an earlier report that the Pelicans were interested in Jeremy Lin, but the point guard’s price was too steep for the team. Lin signed a three-year, $36MM deal with Brooklyn on Friday.

Here’s more from around the league during this crazy start to free agency:

Kevin Durant‘s meeting with the Clippers has concluded, and Durant was “blown away” by the team’s presentation, according to Chris Broussard of ESPN.com (via Twitter). It’s hard to know yet exactly what that means, since Durant was also reportedly impressed with the Warriors‘ pitch earlier in the day — it would probably be more newsworthy if Durant had been unimpressed by one of the teams’ presentations. In any case, the former MVP has sit-downs with the Spurs and Celtics on tap for tomorrow, then is expected to meet with the Heat on Sunday – and possibly the Thunder again after that – before making his decision.

Kevin Durant, who is set to become an unrestricted free agent this summer, said the two most important factors for him in deciding where to play next season will be a strong environment and solid personnel around him, Anthony Slater of The Oklahoman relays. “Just when I sit down and think about it — to be honest, I haven’t put that list together, I guess,” Durant responded when asked what he is looking for in a team. “Just being around great people, being in a great basketball environment, that’s the two most important things for me. That’s all I really care about. Who I’m going to be doing life with every single day, who I’m going to be playing basketball with every day.”

The small forward also noted that the reports he wants to be courted by prospective teams are not true, Slater adds. “I never said that. That’s not who I am. Whatever this thing entails, I’m ready to take it head on, but I’m not that type of person,” Durant said. “I mean, that’s not really — like I said, the two most important things for me is being around great people and having fun playing basketball. All that other stuff that comes with, being who I am and being in this position, it’s not really what I’m concerned with. So I never said that, obviously. You could say that about any player in this position, but yeah.”