Michele Roberts, the executive director of the National Basketball Players Association, has repeatedly dismissed the idea that the NBPA should have accepted the league’s cap-smoothing proposal prior to the 2016 offseason, and she doubled down on that stance in a recent conversation with Kevin Draper of The New York Times. Roberts zeroed in on the theory that the lack of cap smoothing has helped create a perceived competitive imbalance, led by the defending-champion Warriors.

“I have been amused by the chatter suggesting that smoothing — or more accurately the failure to smooth — has now become some folks’ boogeyman de jure,” Roberts wrote in an email. “While we haven’t yet blamed it for the assassination of MLK, some are now suggesting that it is responsible for all that is presumably wrong with today’s NBA. Needless to say, I beg to differ.”

Roberts also refuted the notion that the cap spike in 2016 (when the cap rose from $70MM to $94MM) and the slower growth since then resulted in an unusually poor market for free agents in 2018: “We opened free agency with nine teams that had significant cap room, in excess of $10MM each. Frankly, before the spike, that’s about as healthy of a start as we’ve ever had.”

Finally, Roberts insisted that players shouldn’t be blamed for contracts from 2016 that are now viewed as overpays: “I get that there are folks who believe that some of the contracts executed post the smoothing rejection were too large. I vehemently disagree as I am sure do the players that negotiated those contracts. However, if that’s the beef folks have, take it up with the GMs that negotiated them. The argument that we gave teams too much money to play with is preposterous.”

While it’s hard to argue that a lack of cap-smoothing in 2016 had a major impact on several franchises – including the Warriors, who suddenly had the cap room necessary to afford Kevin Durant – Roberts is right that certain GMs deserve the blame for how they reacted to the sudden cap spike. If some of those teams had preserved their cap room instead of using it to sign mediocre players to oversized contracts, the NBA landscape could look much different today.

Although the Knicks are currently carrying 16 players on NBA contracts, the team hasn’t closed the door on the possibility of signing another free agent before training camp gets underway. As Ian Begley of ESPN.com details, members of the Knicks organization have been in contact regarding free agent big man Willie Reed this month.

Begley cautions that it’s not clear whether the Knicks had – or still have – “serious” interest in Reed, so it’s possible that nothing will come of the club’s inquiries. If New York does sign Reed or another free agent though, the team would eventually have to trade or waive at least two players currently under contract. Joakim Noah, Ron Baker, and Troy Williams could be at risk in a potential roster crunch.

Here are a few more notes and rumors on free agency:

The Clippers will bring in some first-round candidates for a pre-draft group workout on Wednesday, league sources tell Michael Scotto of The Athletic (Twitter link). According to Scotto, Miles Bridges (Michigan State), Kevin Knox (Kentucky), Aaron Holiday (UCLA), and Mitchell Robinson will participate in the session.

The Clippers currently hold the 12th and 13th overall picks in the draft, presenting a number of potential opportunities and directions for the club. Bridges and Knox are viewed as two potential lottery picks who may still be on the board at No. 12, while Holiday and Robinson are ranked slightly lower on most big boards.

Let’s round up a few more Western Conference notes…

Veteran NBA guard Rodney Stuckey is sitting out the 2017/18 NBA campaign, but sounds prepared to attempt a comeback next season, as Jayda Evans of The Seattle Times details.

Stuckey, who suffered hamstring injuries and a strained patella tendon during the 2016/17 season, was waived by the Pacers last March. While a September report suggested he had visits lined up with multiple NBA teams, Stuckey ultimately opted to take some time off from basketball. According to Evans, the absence has allowed the veteran guard to fully recover from his injuries, coach at his old high school, and be present for the birth of his fourth child.

Despite his hiatus, Stuckey – who will turn 32 this April – believes he’s still capable of playing in the NBA and doesn’t sound ready to call it a career quite yet.

“I definitely have a lot of time left in my body,” Stuckey said. “It was just important for me mentally and physically to give my body a rest. I can get back after it next year, and I know I can play another two to three years. Hopefully I’ll get the opportunity to do that and then still feel young and be able to run around with my own kids in retirement.”

Rodney Stuckey, who was waived by the Pacers in late March, has visits scheduled with several teams after the holiday weekend, tweets Shams Charania of The Vertical.

The veteran swingman suffered a left patellar tendon strain that would have sidelined him for the rest of the regular season. Because his contract contained a mutual option, Indiana saved $7MM for the upcoming season by moving him off the roster before April 10.

Stuckey has recovered from the injury and has been “fully healthy” and training throughout the summer, Charania adds.

Stuckey, 31, also battled knee problems last season and was limited to 39 games, averaging 7.2 points and 2.2 rebounds per night in a reserve role. His best seasons came in Detroit, where he spent seven years before signing with the Pacers in 2014.

The Lakers will have to find another option at point guard now that Rajon Rondo has signed with the Pelicans, writes Mark Medina of The Orange County Register. L.A. had talked to Rondo about serving as a mentor to a young roster and especially to rookie Lonzo Ball. Attention may now turn to re-signing 22-year-old Tyler Ennis, who was obtained from Houston in a February trade. Ennis averaged 7.7 points and shot 45% from the field in 22 games with the Lakers.

Other options include Rodney Stuckey and Ian Clark, although L.A. has only the $4.3MM room exception to offer apart from veterans minimum deals. The Lakers currently have 12 players under contract for the upcoming season, along with Alex Caruso signed to a two-way deal.

The Cavaliers weren’t able to get into a bidding war for Jamal Crawford because they need to keep enough money to sign Cedi Osman, writes Joe Vardon of Cleveland.com. Cleveland is well over the cap for the upcoming season and wasn’t willing to give Crawford its entire $5.192MM taxpayer mid-level exception. The Cavs will need at least $816K to sign Osman, who has a $1MM buyout with his Turkish team. Crawford will reportedly sign a two-year, $8.9MM deal with the Timberwolves once he clears waivers. Vardon wrote on Friday that the Cavaliers were the favorites to land Crawford, but the Osman negotiations apparently changed that situation.

There’s more news out of Cleveland:

Free agent big man Willie Reed is meeting today with the Clippers, league sources tell Alex Kennedy of HoopsHype (Twitter link). ESPN’s Adrian Wojnarowski confirms the meeting and adds (via Twitter) that Jeff Withey is also sitting down with the club today. Los Angeles doesn’t have a whole lot of financial flexibility left, having used most of its mid-level exception on Milos Teodosic, but the club remains in the market for a backup for DeAndre Jordan, with Marreese Speights having opted out.

11:31am: The Pacers have officially waived Stuckey, the team announced today in a press release.

9:38am: The Pacers are waiving injured guard Rodney Stuckey, reports Shams Charania of The Vertical (via Twitter). The news comes on the heels of Stuckey suffering a left patellar tendon strain, which is expected to sideline him for four to six weeks. 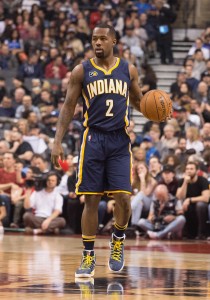 Stuckey’s contract situation was a motivating factor for the Pacers here, since he had an unusual option for the 2017/18 season. In most cases, player options represent guaranteed money (unless the player opts out), but Stuckey’s $7MM player option for next year was more of a mutual option. As Charania notes, by waiving the veteran guard prior to April 10, Indiana won’t be on the hook for any of his salary for 2017/18.

While Stuckey should be ready to return to action by the end of April or start of May, he’s unlikely to land with another team this season, so he could get a head start on free agency for next year, assuming he clears waivers. If he’s formally waived today, the former first-round pick would clear waivers on Friday.

Stuckey, who will turn 31 next month, is coming off perhaps his worst NBA season. In 39 games, he averaged 7.2 PPG and shot just 37.3% from the field — both marks are career-lows. Even if he had stayed healthy, Stuckey may have been a candidate to be cut before season’s end, in order to get the Pacers off the hook for next year’s salary.

With Stuckey headed to the waiver wire, the Pacers will open up a spot on their roster at a time when they could use some added depth. Regular rotation players Al Jefferson and Glenn Robinson III are also on the shelf with injuries as Indiana makes a late-season push to clinch a playoff spot. The team will have the opportunity to add someone new to its roster on either a 10-day contract or a rest-of-season deal.

Rodney Stuckey is expected to miss 4-6 weeks because of a left patellar tendon strain, according to the Pacers‘ website. The shooting guard suffered the strain against the Sixers on Sunday.

The timeline means Stuckey will certainly miss the remainder of the regular season and he’ll likely miss the first round of the playoffs. Indiana enters the day owning the seventh seed in the conference, though Atlanta and Milwaukee, the two teams ahead of them in the standings (via tiebreakers) also share a 37-36 record. All three teams are only two games of the Heat, who currently own the conference’s eighth spot. The Bulls, Pistons and Hornets are sitting outside the playoffs as of now, but they are all within four games of Indiana. Depending on how the Pacers finish the season, Stuckey may not see the court again until the 2017/18 season.

The team is paying him $7MM this season and he has a player option worth $7MM for next year.

Before suffering the strain, Stuckey was battling a knee injury. He’s only been able to play 39 contests for the Pacers this season. He’s averaging 7.2 points per game while shooting 37.3% from the field and sporting a 9.5 player efficiency rating.