Kings Parting With PJ Dozier, Will Give 10-Day Deal To Deonte Burton

The open roster spot will go to Deonte Burton, who is currently with the team’s G League affiliate in Stockton. Burton will receive a 10-day contract that will begin Monday to make him eligible for that night’s game at Minnesota.

A 28-year-old swingman, Burton spent two seasons with the Thunder before becoming a free agent in 2020. The former Iowa State standout has been in the G League since then, playing last year with the Maine Celtics before joining Stockton prior to the start of this season. Burton appeared in 71 total games for Oklahoma City, averaging 2.6 points and 1.2 rebounds in 8.4 minutes per night.

Dozier got into four games during his time with Sacramento and played 10 total minutes. Because players are limited to two 10-day contracts with one team, the Kings would have needed to sign him for the rest of the season to keep him on the roster.

Fox Early Frontrunner For Clutch Player Of The Year

After reporting earlier in the week that the Knicks had expressed interest in acquiring Bucks guard Grayson Allen in a possible Cam Reddish trade, Michael Scotto of HoopsHype says Milwaukee continues to resist the idea of including Allen in any deal for Reddish.

According to Scotto, the Bucks have instead proposed a trade structure that would be centered around a 2023 second-round pick and salary filler. That “salary filler” could consist of veteran guard George Hill and big man Serge Ibaka, Scotto adds.

As for the second-round pick, the Bucks control both their own 2023 second-rounder and the least favorable of the Cavaliers’ and Warriors’ selections. Both Milwaukee and Cleveland currently have top-seven records, so those picks would both be in the 50s.

After spending four professional seasons playing for teams in France and Spain, forward Chima Moneke got his first opportunity with an NBA team this past fall when he received a partially guaranteed contract from the Kings and made their regular season roster.

Although he was on Sacramento’s roster until early January, Moneke logged just eight total minutes in two games at the NBA level. The 27-year-old – who spent most of his time in the G League, appearing in 18 total contests for the Stockton Kings – admitted in a conversation with Cesare Milanti of Eurohoops that his NBA experience was a bit of a letdown.

“It wasn’t what I expected and it was disappointing, because I feel like up until the training camp started, at the end of September, I was there for two months and I was playing open gym with them, working out. I felt like I was really gonna be given an opportunity,” Moneke said. “But when the whole team got there and the training camp started, I felt like I wasn’t.

“… Getting sent to the G League… I tried to be positive about it, but in my heart, I knew that I just didn’t want to be there. I just wasn’t having fun playing in a big cold hockey arena with 20 people watching the game when I could have been playing in Europe with fans who care about the sport. Every time I was there it really hurt me. I tried to be positive but I knew in November that I didn’t want to be there.”

Waived by the Kings about three weeks ago before his 2022/23 salary became fully guaranteed, Moneke has since returned to Europe, completing a deal last week with AS Monaco.

In a conversation with ESPN colleague Bobby Marks about Portland’s possible approach to this season’s trade deadline, Lowe stated that there are “a lot” of teams around the NBA who would like Hart, specifically citing Miami as a possible suitor since the 27-year-old is a “Heat kind of guy.”

Hart is playing a crucial role this season for the Blazers. In addition to starting all 45 games he has played, he’s averaging 34.0 minutes per contest and ranks third on the team in total minutes played (1,530). However, his contract situation has made him the subject of trade speculation — he holds a player option on his contract for 2023/24, so he could become an unrestricted free agent this summer.

Here’s more from Lowe and Marks:

JANUARY 25: The Kings have officially extended both McNair and Wilcox, the team announced late on Tuesday night in a press release. 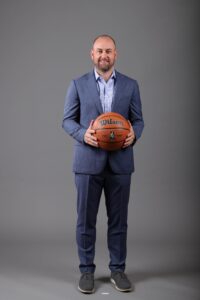 “Monte is an integral part of this organization, and I am thrilled to announce his extension,” team owner Vivek Ranadivé said in a statement. “Since joining the Kings, Monte and Wes have proven to be thoughtful and strategic decision makers who have shown their ability to execute a long-term vision for the team. The work continues, and I have confidence in this front office to keep driving our efforts forward.”

JANUARY 24: The Kings and general manager Monte McNair have reached an agreement on a contract extension, sources tell Adrian Wojnarowski of ESPN.

According to Sam Amick of The Athletic (Twitter link), McNair is signing a three-year extension with no options.

Marc Stein reported in December that there was a growing expectation in NBA circles that McNair, who was in the final year of his contract, would sign an extension as soon as January, and now that has come to fruition.

“I’ll just say my family loves it in Sacramento and we’re very happy with how things are going,” McNair told Jason Anderson of The Sacramento Bee last month. “We’re just focused on winning and continuing to keep this thing growing.”

At 27-19, the Kings are currently the West’s No. 3 seed and are in a strong position to snap their 16-year playoff drought, which is an NBA record. The McNair-led front office drafted and then later traded rising point guard Tyrese Haliburton to Indiana for All-Star center Domantas Sabonis, and selected guard Davion Mitchell in the 2021 draft.

In the 2022 offseason, the Kings drafted forward Keegan Murray, who has made an immediate impact, traded for sharpshooter Kevin Huerter and added sixth man Malik Monk in free agency. The franchise also hired head coach Mike Brown, who has helped change the culture of the previously dysfunctional organization.

Jackson, the fourth selection in the 2017 draft, was in training camp with the Raptors but was waived shortly before the start of the season. The 25-year-old wing has previous G League experience, playing 26 games with the Memphis Hustle in 2019/20.

Jackson has turned into an NBA journeyman after spending his first two seasons in Phoenix. The Suns traded him to the Grizzlies in 2019, and he signed with the Pistons as a free agent in 2020. Detroit shipped him to Sacramento as part of a four-team deal at the trade deadline last February, and he appeared in 12 games with the Kings before becoming a free agent again.

In five seasons, Jackson has played 291 total games with career averages of 11.3 points, 4.0 rebounds and 1.8 assists.

Suns point guard Chris Paul has missed 21 of 48 games this season due to injuries and has seen his production dip even when he’s healthy — his 13.4 points per game would be a career low, while his 42.7% field goal percentage is the second-worst mark of his career.

Paul’s limitations have prompted the Suns to begin considering their post-CP3 future at point guard, according to Marc Stein, who reports at Substack that Phoenix has identified the Raptors‘ Fred VanVleet, the Hornets‘ Terry Rozier, and the Knicks‘ Immanuel Quickley as potential trade targets.

As Stein outlines, the Knicks are considered unlikely to move Quickley and it remains to be seen what Toronto’s intentions are for VanVleet, but Rozier is widely believed to be very much available for a struggling Hornets club that will likely be one of the deadline’s top sellers.

Here are a few more trade-related rumors from around the NBA:

The Clippers and Nuggets are among the teams that have expressed interest in Timberwolves center Naz Reid, Michael Scotto of HoopsHype writes in his latest roundup of trade rumors.

Reid will be an unrestricted free agent this summer, and Scotto says there’s a belief around the league that he could land a contract worth the full taxpayer or non-taxpayer mid-level exception. Although he’s primarily a backup, Reid has been effective amid injuries to Karl-Anthony Towns and Rudy Gobert, averaging 15.4 PPG in seven games as a starter this season.

The Wolves are also exploring offers for D’Angelo Russell, and Scotto suggests that both Minnesota players might be moved in deals involving L.A.’s Terance Mann or Denver’s Bones Hyland, whom Connelly drafted during his time with the Nuggets.

Scotto offers more insight into the trade market with the deadline nearing:

The Mavericks and Kings are among several teams that have contacted the Wizards about Rui Hachimura, according to Michael Scotto of HoopsHype.

Hachimura, who has been on a scoring tear lately, addressed trade rumors over the weekend, saying he wants to be with a team that “believes in me.” Washington faces a potential salary crunch this offseason with Kristaps Porzingis and Kyle Kuzma both holding player options, and Hachimura might be expendable due to luxury tax concerns.

Hachimura is making just $6.26MM this season, so teams would have to send back at least $4.9MM in salary to Washington in any deal. Scotto notes that the Kings can use either Terence Davis or Alex Len to match Hachimura’s salary.

There had been reports that Hachimura was offered to the Suns as part of a deal for Jae Crowder, although a Wizards official denied that rumor earlier this month. Scotto hears that Washington no longer has interest in Crowder because he may not be able to make an immediate impact after such a long layoff.