Kyle Kuzma will make his debut for the Lakers on Friday and LeBron James is happy to have him back with the club, as Sacha Pisani of Sporting News relays.

“He hasn’t played since USA basketball when he had the stress reaction,” James said “Obviously he’s been training and working out, but like I always tell you guys, there’s no substitution for game fatigue and game stamina.

“That will come, though. It’s great to have him back on the floor. We definitely missed him.”

Here’s more odds and ends from around the basketball world:

As players like Amar’e Stoudemire, Monta Ellis, and Marreese Speights work out in front of NBA teams in the hopes getting back in the league, Arash Markazi of The Los Angeles Times reports (via Twitter) that veteran guard Sasha Vujacic is also looking to make an NBA comeback.

According to Markazi, Vujacic has been working out daily in Los Angeles and hopes to play in the NBA next season. The former Lakers and Clippers guard said it would be his dream to play in L.A. again, Markazi adds.

Vujacic, who made his NBA debut with the Lakers in 2004 after being selected 27th in the draft, has appeared in 581 total regular season games, suiting up for the two L.A. teams and both of the New York clubs as well. His most recent NBA stint came in the 2016/17 season, when he appeared in 42 games for the Knicks. The 35-year-old has played in Italy since then.

While Vujacic will seek an NBA contract, his comeback attempt looks like a long shot. He had also been hoping to break back into the league last summer, and worked out for two teams in September, but nothing came of those auditions. Now two full seasons removed from his last NBA appearance, Vujacic is facing increasingly unfavorable odds.

Longtime NBA shooting guard Sasha Vujacic worked out for the Pelicans on Monday, Andrew Lopez of the New Orleans Times Picayune tweets. The Thunder are hosting Vujacic today as he attempts to return to the league, according to RealGM.

Vujacic revealed last month that he was seeking another NBA contract. He spent the 2017/18 season with Fiat Torino of the Lega Basket Serie A in Italy, helping the team win its first even Italian Cup by scoring the deciding layup in the final seconds.

The workouts for Vujacic can be chalked up as teams exercising due diligence with training camp around the corner. The Pelicans have eight wing players on their roster already, though they continue to look for another option at shooting guard. Their offer sheet to restricted free agent Tyrone Wallace was matched by the Clippers a week ago.

The Thunder have a number of options at shooting guard, including Andre Roberson, Alex Abrines, Terrance Ferguson and Hamidou Diallo, though Roberson is still recovering from a knee injury and could remain sidelined until December.

A 10-year NBA veteran, the 34-year-old Vujacic last played in the NBA during the 2016/17 season, appearing in 42 games for the Knicks and averaging 3.0 PPG and 1.2 APG in 9.7 MPG. The highlight of Vujacic’s NBA career was winning two championships with the Lakers.

Vujacic, 34, also had brief stints with the Clippers and Nets.

According to Emiliano Carchia of Sportando, veteran guard Sasha Vujacic is hoping for a return to the NBA for the 2018/19 season.

Vujacic spent the 2017/18 season with Fiat Torino of the Lega Basket Serie A in Italy, helping the team win its first even Italian Cup by scoring the deciding layup in the final seconds.

“I don’t know where I will be playing next season,” Vujacic said. “But honestly, I am first waiting for the NBA. But I also know that my agent is talking to some European teams, Torino included.”

After spending the last two seasons with the Knicks, veteran guard Sasha Vujacic is set to head back overseas. Italian team Fiat Torino announced today (Italian link) that it has reached an agreement to sign Vujacic.

International basketball reporter David Pick, who classifies the contract as an offer sheet, indicates (via Twitter) that it’s worth $350K. According to Emiliano Carchia of Sportando, the agreement includes an NBA buyout clause that must be exercised by September 17. Vujacic will presumably be locked in with Fiat Torino for the 2017/18 season if that buyout clause goes unused.

For Vujacic, the move to Italy will represent a homecoming of sorts — the Slovenian shooting guard began his professional career with Italian club Snaidero Udine back in 2001, spending his first three seasons with the team. He eventually made the leap to the NBA in 2004, spending several years with the Lakers before being traded to the Nets in 2010.

Since 2010, Vujacic has gone back and forth between the NBA and international leagues, spending time with the Nets, Clippers, and Knicks in addition to playing for teams in Turkey, Italy, and Spain. In 10 total NBA seasons, the 33-year-old has appeared in 581 games, averaged 5.3 PPG, 1.9 RPG, and 1.3 APG, while shooting 36.7% on three-pointers. Vujacic struggled through one of his worst seasons as a pro last year in New York, shooting just 30.9% from the floor for the Knicks.

Latest On The Chris Paul Trade

Chris Paul‘s departure from the Clippers today severed a relationship that began to fall apart when the team acquired Austin Rivers in 2015, according to a Facebook post from Michael Eaves of ESPN. Several Clippers believed Rivers brought an entitled attitude to the team because he is the son of coach and president of basketball operations Doc Rivers. Veterans didn’t think Austin Rivers tried hard enough to fit in, which created dissension in the locker room. Paul, in particular, thought that Austin Rivers got preferential treatment from his father.

The situation reportedly reached a breaking point prior to the trade deadline when the Knicks offered Carmelo Anthony and Sasha Vujacic to L.A. in exchange for Jamal Crawford, Paul Pierce and Austin Rivers. Doc Rivers blocked the deal, which led Paul to believe that coaching his son was more important than winning, with an unidentified league executive saying, “Chris despises Doc.”

The Knicks appear to be done with buyouts after parting ways with Brandon Jennings today. While there was some speculation about Derrick Rose being cut by the club, Ramona Shelburne of ESPN suggests the Knicks probably won’t complete any more buyouts unless “a player they like becomes available.” (Twitter link)

Despite Jeff Hornacek‘s words to the contrary, the Knicks appear to be in full-on tank mode at this point. Sporting a 24-35 record, the Knicks are four games behind Detroit for the eighth seed of the Eastern Conference.

More from The Garden…

Players Who Can Veto Trades

No-trade clauses are rare in the NBA, and they became even rarer this offseason, when several players with those clauses in their contracts either called it a career or signed new deals. Kobe Bryant, Tim Duncan, and Kevin Garnett, who all opted for retirement, had no-trade clauses last season, and so did Dwyane Wade, who doesn’t have the same protection on his new contract with the Bulls.

Nonethless, while the list of players with explicit no-trade clauses may be dwindling, there are still several players each year who have the ability to veto trades. A player who re-signs with his previous team on a one-year contract – or a two-year contract with an option clause – is given no-trade protection, and so is a player who signs an offer sheet and has that offer matched by his previous team. Players who accept qualifying offers after their rookie deals expire can also block deals, though no restricted free agents signed their QOs this year.

Taking into account that list of criteria, here are the players who must give their consent if their teams want to trade them during the 2016/17 league year:

Players whose offer sheets were matched

Information from Basketball Insiders and Yahoo! Sports was used in the creation of this post.

JULY 12, 10:12am: The Knicks are bringing back one of their rotation players from last season, according to Marc Berman of The New York Post, who reports (via Twitter) that Sasha Vujacic has agreed to terms on a new deal with the team. It will be a one-year, minimum-salary contract for Vujacic, per Berman. 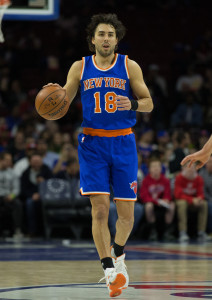 Although his numbers weren’t great last season, Vujacic also wasn’t getting significant playing time, averaging less than 15 minutes per game. With a handful of incoming players added to the roster this offseason, Vujacic may start the 2016/17 campaign in a role that’s even more reduced.

Of course, Derrick Rose will be one player ahead of him on the Knicks’ depth chart, and Rose hasn’t played more than 66 games in a season since 2010/11, so there could be some opportunities for Vujacic to get increased minutes. Brandon Jennings will also be in the mix at point guard, while Courtney Lee , Justin Holiday, and Mindaugas Kuzminskas are other backcourt options for the Knicks.

The Knicks used up their cap space on deals for Joakim Noah, Lee, and Jennings, then signed Kuzminskas using their mid-level exception. As such, the team now only has room for minimum-salary contracts, which limited the amount New York was able to offer Vujacic.

The Knicks officially renounced their rights to free agents Derrick Williams, Kevin Seraphin, Lou Amundson and Cleanthony Early, and as a result, the quartet no longer count against the team’s salary cap figure, Ian Begley of ESPN.com relays (ESPN Now link). The team can still re-sign any of the players using cap space, save Williams, who agreed to a one-year pact with the Heat earlier this evening.

Here’s more from the Big Apple: