The Celtics, Magic and Blazers all recently opened up their head coaching positions, with more teams potentially on the horizon. Many league observers are monitoring the Pacers and Pelicans after both clubs finished with underwhelming campaigns.

The NBA G League is discussing a number of options with its 28 teams for the 2020/21 season, one of which includes playing in a bubble environment, according to Harrison Feigen of SB Nation.

Teams were notified that the goal remains to play out a full season, Feigen reports, though exact details of the campaign remain unknown. The bubble environment could also exist in ‘regional bubbles’, rather than the Disney format used to finish the 2019/20 NBA season.

Besides the importance of developing young talent, another major push for the G League season to happen is the newly introduced Select Team, league sources told Hoops Rumors. The team acts as a one-year development program for NBA prospects fresh out of high school, with five-star recruits such as Jalen Green and Isaiah Todd set to play if a season is held.

Despite much about the G League campaign being unknown, the NBA and its players’ union have agreed to a start date for their season: December 22. The draft remains scheduled to be held on November 18, with free agency expected to commence shortly thereafter.

The BIG3 has announced some changes in advance of its 2020 season, as Eric Woodyard of ESPN.com details. Most notably, Ice Cube‘s 3-on-3 league will lower the minimum age from 27 to 22 in order to try to eliminate the perception that the BIG3 is only for retired NBA players.

“I think lowering the age does erase the stigma,” Ice Cube told Woodyard. “It might’ve kept people from playing in the BIG3 because they don’t want to seem like they’re done.”

The BIG3 will also hold open tryouts this spring and will welcome two-sport athletes, as Woodyard details.

The most entertaining change to the league’s on-court rules is the introduction of a team’s once-per-half ability to challenge a foul call. Rather than having a replay official make a ruling, a challenge will result in an in-game, one-on-one possession, with the victor winning the call. The full list of changes can be found here.

Point guard Jeremy Lin has received an offer from CSKA Moscow, according to Emiliano Carchia of Sportando. Lin is one of the biggest names remaining on the NBA free agent market but has received little interest following a disappointing stint with the champion Raptors. He was expected to be a rotation player in the playoffs after reaching a buyout with the Hawks but only appeared in eight postseason games during the title run, averaging 1.1 PPG in 3.4 MPG. Lin, 30, has appeared in 480 NBA games.

We have more international basketball news:

JULY 25: Mack has officially signed a two-year contract with Olimpia Milano, the team announced today in a press release.

Emiliano Carchia of Sportando first reported earlier today that Mack had reached an agreement in principle to join the Italian club. Carchia also noted that James was expected to be bought out.

JULY 24: Shelvin Mack, who played for both the Grizzlies and Hornets last season, is drawing interest from Olimpia Milano, according to Alessandro Maggi of Sportando. Mack could replace former NBA point guard Mike James, even though James is still under contract with the Italian team.

Mack signed with Memphis last summer and appeared in 53 games, averaging 7.9 points per night, before being traded to the Hawks in February. Atlanta waived him immediately and he was claimed by Charlotte, but saw limited playing time in just four games.

The 29-year-old also spent time with the Wizards, Sixers, Jazz and Magic in an eight-year NBA career.

Every week, Hoops Rumors takes a closer look at players who will be free agents or could become free agents next offseason. We examine if their stock is rising or falling due to performance and other factors. This week, we turn our attention to the Southeast Division:

Justin Anderson, Hawks, 25, SG (Down) – Signed to a four-year, $7MM deal in 2015
The Hawks can make Anderson a restricted free agent if they extend a $3.62MM qualifying offer. Anderson hasn’t given them much incentive to do so since they acquired him in an offseason trade with Philadelphia. Anderson is getting fewer minutes off the bench than ageless wonder Vince Carter, with under six minutes per game in seven March appearances. A recent report indicated that the Hawks would be aggressive in free agency. Renouncing Anderson’s rights would give them more elbow room to pursue top-tier players. 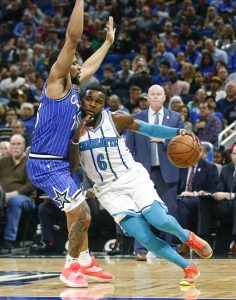 Shelvin Mack, Hornets, 28, PG (Down) – Signed to a one-year, $2MM deal in 2018
It’s rare when NBA players are claimed off waivers. Mack proved to be an exception after the Grizzlies traded him to the Hawks last month, who weren’t interested in retaining his services. The Hornets were looking for some insurance behind backup Tony Parker, but Mack has been mostly a spectator. He’s appeared in just three games since the waiver claim after receiving steady minutes on Memphis’ second unit. Mack will be shopping around for a one-year minimum deal once again this offseason.

Derrick Jones Jr., Heat,, 22, SF (Up) – Signed to a two-year, $3.16MM deal in 2018
The Heat have an August 1 deadline to guarantee Jones’ $1.645MM salary for next season. Considering that Jones is a young rotation player, that would seem to be an easy decision. Jones remains a work in progress offensively but advanced metrics indicate he’s making a defensive impact. His Defensive Box Plus/Minus rating, according to Basketball-Reference is a solid 1.4. Jones is shooting 49% from the field, mainly due to the fact that 54% of his attempts have come within three feet of the basket. He’s averaging 21.5 MPG in March, a sign of trust from coach Erik Spoelstra.

Nikola Vucevic, Magic, 28, C (Up) — Signed to a four-year, $53MM deal in 2015
There have been conflicting reports whether Dallas will make a big push for Orlando’s big man this summer. No doubt, there will be a market for Vucevic’s services. He’s averaging career highs of 20.6 PPG and 12.2 RPG in his walk year and coach Steve Clifford adds that Vucevic essentially gives the team “two point guards” when he’s on the floor. Vucevic isn’t considered a defensive stalwart but his Defensive Box rating this season is a career-high 3.7. Vucevic won’t get a max-level offer but he’ll be making a lot more than $12.75MM next season.

Sam Dekker, Wizards, 24, SF (Down)– Signed to a four-year, $7.9MM deal in 2015
Dekker could be a restricted free agent this summer if the Wizards extend a $3.91MM qualifying offer. That’s not going to happen, as Dekker hasn’t been any better in Washington than he was in three other NBA stops. The 18th overall pick in the 2015 draft has made 33 appearances with the Wizards since he was acquired from Cleveland in early December. He’s averaging 5.9 PPG in 15.4 MPG, but shooting just 29.4% from deep and 51.6% from the foul line. Dekker’s expectations should be modest in the open market.

While the Hornets didn’t make a move at the trade deadline, Shams Charania of The Athletic and Stadium is reporting (via Twitter) that they will be adding more depth by claiming Shelvin Mack off of waivers after the veteran point guard was released by the Hawks.

Before being traded by the Grizzlies and subsequently released by Atlanta, Mack was averaging 7.9 points and 3.4 assists per game in a prominent role for Memphis. Mack appeared in 53 games and played 22.7 minutes per game, the second-highest average of his career.

The Hornets have received quality play at point guard with Tony Parker backing up All-Star Kemba Walker, so it will be interesting to see how much playing time Mack receives down the stretch of the regular season.

Because the Hornets have claimed Mack off of waivers, the Hawks are no longer responsible for the remainder of Mack’s contract, which is now off of their salary cap. Because the veteran point guard was on a minimum salary deal, Charlotte was able to claim him using the minimum salary exception.

The Hawks have officially requested waivers on Shelvin Mack, the team announced today in a press release. He’ll become a free agent on Sunday, assuming he goes unclaimed.

The Grizzlies sent Mack to the Hawks in exchange for Tyler Dorsey in a deadline-day trade on Thursday. Considering the deal doesn’t appear to have saved Atlanta any money and no other assets were said to be included, it’s not clear what the Hawks’ motivations were for making the trade.

In any case, Atlanta now has two open roster spots and will have two weeks to fill at least one of them.

9:54pm: The Grizzlies have officially traded Mack to the Hawks in exchange for Dorsey, the team confirmed on Thursday (Twitter link).

1:35pm: The Grizzlies and Hawks are in agreement on a trade that will send point guard Shelvin Mack to Atlanta and shooting guard Tyler Dorsey to Memphis, tweets Michael Wallace of Grizzlies.com.

However, Mack is expected to be waived by Atlanta, per Chris Vivlamore of The Atlanta Journal Constitution (Twitter link). If those are the Hawks’ intentions for Mack, it’s not clear what their motivations are for making the deal.

As for the Grizzlies’ side, sending out Mack for Dorsey allows the retooling squad to replace a veteran with a young prospect who had taken a step backward in Atlanta this season. A second-round pick in the 2017 draft, Dorsey posted 7.2 PPG and a .362 3PT% in his first year, but those numbers have dipped 3.3 PPG and a .256 3PT% in year two, as he has seen his role cut back.

After Shams Charania of The Athletic reported on Wednesday that Dillon Brooks would likely miss the remainder of the 2018/19 season due to a toe injury, head coach J.B. Bickerstaff was put on the spot during his usual media availability. As David Cobb of The Memphis Commercial Appeal details, Bickerstaff was frustrated by the fact that he was asked about the report on Brooks before the team was able to put out an official update.

“I think the bigger issue [than Brooks’ status] is we need to be concerned with how information is getting out,” Bickerstaff said. “There are things that should remain in-house until, as an organization, we decide to put out a statement with everyone on the same page. I think first and foremost, we need to address that and make sure the people with information are the people who need to have information.”

While the news on Brooks’ injury would have been announced a few hours later anyway, there have been a number of other instances within the last month where leaks impacted the Grizzlies more significantly. The most obvious cases involved the failed three-team trade with the Suns and Wizards, as well as a locker room altercation between Garrett Temple and Omri Casspi.

After word of that Temple/Casspi incident broke, GM Chris Wallace said his team would deal internally with the leak.