Timberwolves star forward Karl-Anthony Towns will be further evaluated on Tuesday after an initial diagnosis of a right calf strain, Chris Hine of the Minneapolis Star Tribune tweets.

Towns suffered a non-contact injury during the third quarter of Minnesota’s contest against Washington on Monday night. He grabbed at the back of his leg as tried to head down the court. Towns needed assistance to be helped back to the locker room.

“Obviously super-concerned about that. Big blow for us,” coach Chris Finch said (Twitter link via David Aldridge of The Athletic).

Towns will get an MRI but there’s some early optimism that he may have avoided a substantial injury, ESPN’s Adrian Wojnarowski tweets.

It has been a disappointing season so far for the Timberwolves, whose record dropped to 10-11 with a loss to the Wizards. They were expected to be serious contenders in the Western Conference after the blockbuster trade with Utah that brought center Rudy Gobert to Minnesota.

An extended absence for Towns would make it much more difficult for a turnaround. He’s averaging 21.4 points, 8.5 rebounds and 5.3 assists per game.

The Timberwolves frontcourt is already dealing with the absence of Taurean Prince, who expected to be out a couple of weeks with a shoulder injury. Jaden McDaniels missed Monday’s game due to an illness.

Rudy Gobert understood that the Timberwolves‘ adjustment wouldn’t be easy after shaking up their roster to acquire him from Utah, writes Jon Krawczynski of The Athletic. Not only did Minnesota give up five players in the deal, the team committed to an entirely different style of play with Gobert clogging the middle and forming a modern-day Twin Towers alongside Karl-Anthony Towns.

Nineteen games into the season, Gobert’s concerns have been proven correct. The Wolves are a game above .500, but they’ve had some ugly losses along the way, including Friday’s at Charlotte, where it’s seemed like the pieces don’t really fit together.

“Each bad game, they’re going to be ready to talk. That’s great. We love it,” Gobert said before the season began. “That’s part of the process. Nothing great comes easy. If it was going to happen in one game, that wouldn’t be worth having. We gotta work hard and work every night to get better.”

After a 5-8 start, Minnesota had strung together five straight wins before Friday. But perimeter defenders have been relying too much on Gobert to bail them out after their man drives by, Krawczynski observes, and the chemistry between Gobert and D’Angelo Russell on the pick-and-roll remains a work in progress.

“Sometimes, you know, passes are tough. Sometimes I fumble it,” Gobert said. “Most of the time, I get it and something good happens. As long as we can keep that trust and I can try to put myself in the right spots for him to find me and whether it’s that pocket pass or that lob, any pass actually, just trusting me.”

Timberwolves forward Taurean Prince said he’s relieved that a grand jury in Texas did not charge him with possession of a controlled substance stemming from a May 19 arrest, according to Chris Hine of the Minneapolis Star Tribune.

“To me, I wasn’t in the wrong in the first place,” Prince said. “The situation that happened was very unfortunate. Things happen, for whatever reasons they happen. I’m past it now, though.”

Police in Arlington, Texas said after the arrest that they found guns and a vape pen with THC oil in Prince’s car when they stopped him for an expired registration. Possession of marijuana is illegal in Texas, and it also violates state law “to carry a gun while engaging in a criminal offense.”

Prosecutors also dropped the gun charges after the grand jury’s decision, according to a TMZ report.

The trade that brought D’Angelo Russell to the Timberwolves has turned into a huge mistake, contends Jim Souhan of The Star Tribune. Minnesota was looking for more size and scoring in its backcourt when it sent Andrew Wiggins and a pair of draft picks — one of which became Jonathan Kuminga — to Golden State in exchange for Russell and two other players at the 2020 trade deadline. Wiggins wound up as a vital cog in the Warriors’ title team, while Russell continues to frustrate Wolves fans, Souhan states.

The latest embarrassing incident came in the first half of tonight’s loss to the Suns when Russell didn’t realize he was supposed to be on the court. Minnesota played a four-on-five possession that resulted in a Phoenix three-pointer. Souhan notes that Russell came into the game ranked 211th overall in Player Efficiency Rating and 42nd among point guards in a 30-team league.

After being benched in the playoff series against Memphis, Russell hasn’t looked any different this season, according to Souhan. He observes that the Wolves often look uncertain on the court, which shouldn’t happen to a team with a veteran point guard.

Having traded away solid three-point shooters like Malik Beasley and Patrick Beverley in the blockbuster Rudy Gobert deal, the Timberwolves have seen their outside shooting take a step back in the early part of this season, writes Jon Krawczynski of The Athletic.

While the personnel changes are one reason why the Wolves aren’t attempting or making as many three-pointers, several players on the roster are shooting below their previous rates, so some positive regression could be coming. Still, head coach Chris Finch said last week that he doesn’t necessarily expect this year’s team to shoot as much from outside as last year’s, stressing that good ball movement and quick decisions are more important for unlocking the offense.

“Too much thinking, I think, as a group, including myself,” D’Angelo Russell said of the offensive issues. “It’s part of the process. Everybody’s in positions that they’ve never been before.”

11:35am: Police in Arlington, Texas say they found guns and a vape pen with THC oil in Prince’s car when they stopped him in May for an expired registration, according to Eric Chaloux of KSTP-TV (Twitter thread).

Possession of marijuana is illegal in Texas, and it also violates state law “to carry a gun while engaging in a criminal offense,” the police said.

8:33am: Timberwolves forward Taurean Prince was arrested on Thursday in Miami, according to several reports, including from KSTP in Minnesota and Chris Hine of The Star Tribune.

KSTP’s report indicates that Prince was booked into jail custody on Thursday evening in Miami-Dade County. According to Hine, Prince was arrested at Miami International Airport on a fugitive out-of-state warrant from Texas. The six-year NBA veteran was born in San Marcos, Texas, was raised in San Antonio, and attended Baylor for college.

Details are still sparse on the possible charges that Prince is facing. Andy Slater of Fox Sports 640 South Florida reported (via Twitter) that the Texas warrant was drug-related, but that has yet to be confirmed.

“We are aware of the alleged report regarding Taurean Prince and are in the process of gathering more information,” the Timberwolves said in a statement on Thursday.

Prince had been on track for unrestricted free agency this summer, but the Timberwolves signed him to a two-year contract extension just before the new league year began. That deal includes a guaranteed base salary of $7.1MM for 2022/23, with $195K in likely incentives and another $870 in unlikely incentives for the coming season. The second year of the contract is non-guaranteed.

We’ll have to wait for additional information to get a real sense of how serious Prince’s legal situation is and whether it will affect his availability at all for the coming season.

Taurean Prince‘s two-year extension with the Timberwolves was initially reported to be worth $16MM, but its base value actually comes in at just $14.56MM, and the second year is non-guaranteed, Hoops Rumors has learned.

Prince’s new deal also includes $195K in likely incentives per year, along with another $870K in annual unlikely incentives, so if he plays out the full two-year contract and maxes out its value, it’ll be worth $16.69MM in total.

The second year of Prince’s new deal would become fully guaranteed if he remains under contract through June 28, 2023.

JUNE 30: Prince’s extension is now official, according to the Timberwolves (Twitter link). 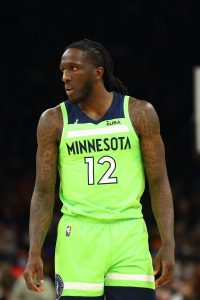 Prince was headed to unrestricted free agency but had expressed a strong desire to remain in Minnesota, and the team is locking up to an extension that will keep him off the market.

Shortly after the season, Prince said he planned to return, adding that the strong camaraderie in the Wolves’ locker room is something he hasn’t experienced since college. He praised head coach Chris Finch, comparing him to Mike Budenholzer, who coached Prince in Atlanta at the start of his NBA career.

The second year of Prince’s new contract will be non-guaranteed, Jon Krawczynski of The Athletic tweets. It’ll represent a slight pay cut for Prince, who signed a two-year, $25.25MM contract with Brooklyn in 2019 and earned $13.3MM this past season.

Prince averaged 7.3 PPG and 2.5 RPG on .454/.376/.756 shooting in 69 regular season games (17.1 MPG) during his first year in Minnesota. The Wolves held his Bird rights, so they had the ability to go over the cap to re-sign him without using any other exceptions.

Steve Clifford, who is now embarking on a second stint with the Hornets, signed a three-year contract with a team option in the final year, sources tell Roderick Boone of The Charlotte Observer. Clifford will earn $4MM in each of the next two seasons, Boone adds.

In case you missed it, you can find our full story on Clifford’s hiring right here.

In the latest HoopsHype podcast with Michael Scotto, Jon Krawczynski of The Athletic said he fully believes that Karl-Anthony Towns will be offered — and will sign — a super-max extension with the Timberwolves summer. Towns became eligible for the super-max after being selected to the All-NBA Third Team.

Krawczynski acknowledges that Towns has his share of flaws, but he points out that Minnesota isn’t a free agent destination, the team has undergone lots of front office and coaching changes in his seven seasons, and he hasn’t played with a whole lot of talent around him. Once the deal is signed, if Towns plateaus, the Wolves still have the option of trading him in the future due to his “age, production and efficiency,” says Krawcyznski.

Here’s more from Scotto and Krawczynski: