Bojan Bogdanovic originally injured his right wrist in a late November game, Tony Jones of The Athletic tweets. The Jazz swingman will undergo wrist surgery on Tuesday and won’t return if the season resumes. Bogdanovic had an MRI after the original injury and tried to play through the pain but aggravated it at various times throughout the season, Jones adds.

Veteran NBA forward Trevor Booker is officially calling it a career, publishing a letter on Twitter today to announce his retirement as a player. 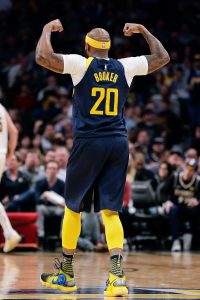 “THANK YOU BASKETBALL!” Booker wrote within his retirement announcement. “I have no clue where I would have ended up without you, but watch where you take me. I hope you guys continue to watch my journey because it’s definitely not over, it’s just the beginning.”

The 23rd overall pick in the 2010 draft, Booker spent his first four NBA seasons with the Wizards before spending time with the Jazz, Nets, Sixers, and Pacers. He appeared in a total of 532 regular season games, primarily as a backup, averaging 6.9 PPG, 5.5 RPG, and 1.1 APG. He also saw action in a total of 16 postseason contests for Washington and Indiana.

Booker, 32, last appeared in the NBA during the 2017/18 campaign, playing a total of 68 games for the Nets, 76ers, and Pacers, averaging 6.3 PPG and 4.7 RPG in 17.0 MPG. After failing to catch on with an NBA team in the summer of 2018, he signed with China’s Shanxi Brave Dragons, but left the team early in the season and returned stateside to undergo foot surgery.

Booker worked out for NBA teams last summer and was said to still be on some clubs’ radars as recently as January. However, after another season without an NBA opportunity, he apparently decided it was time to hang up his sneakers.

Veteran forward Trevor Booker hasn’t played an NBA game since the 2017/18 season, but he remains on teams’ radars, according to Alex Kennedy of HoopsHype (Twitter link). Sources tell Kennedy that Booker has received interest from several NBA clubs, with a handful of playoff teams among those monitoring him.

Booker, an eight-year NBA veteran, appeared in a total of 68 games during the 2017/18 campaign for the Nets, Sixers, and Pacers, averaging 6.3 PPG and 4.7 RPG in 17.0 MPG. After failing to catch on with an NBA team in the summer of 2018, he signed with China’s Shanxi Brave Dragons, but left the team early in the season and returned stateside to undergo foot surgery.

During the 2019 offseason, Booker worked out for multiple potential suitors, including the Nuggets, Bucks, and Clippers. Although he didn’t find a new NBA home at that point, he’s still just 32 years old and hasn’t given up on a comeback.

According to Kennedy, it’s “very possible” a team in need of frontcourt depth will sign Booker at some point after the February 6 trade deadline.

With Kawhi Leonard gone from Toronto, veteran big man Marc Gasol becomes even more important to the Raptors’ success this season and beyond than he was during the team’s memorable run to a title during the 2018/19 campaign, writes Jonathan Tjarks of The Ringer.

With Leonard back home in California, forward Pascal Siakam becomes the undisputed future of the Raptors, with his development into a star of paramount concern for Toronto’s long term outlook. And as Tjarks analyzes, Siakam is at his best – or at least was last year – when playing alongside Gasol.

For one, Siakam loves to put the ball on the floor and attack the rim, so it’s important to play him with a center who can shoot well enough from the outside to drag Siakam’s defender out of the paint.

Additionally, Siakam is not yet an elite play-maker, so it helps to have other players like Gasol around him who can keep everyone else involved in the offense while Siakam plays in attack mode.

Finally, Gasol provides a large body that Toronto can use during the regular season to bang with big Eastern Conference centers like Joel Embiid over the course of an 82-game season. As Tjarks analogizes, Gasol essentially acts as a lead blocker for Siakam, clearing obstacles for Siakam to thrive.

Trevor Booker Working Out For Teams

Trevor Booker, who is among the notable players available on the free agent market, recently worked out for the Nuggets, according to Alex Kennedy of HoopsHype (Twitter link). The big man has scheduled workouts with the Bucks and Clippers as well.

Booker last played in the NBA back in the 2017/18 season when he started the year with the Nets. He was dealt to the Sixers as part of the Jahlil Okafor trade early in the season and he was subsequently waived before catching on with the Pacers.

Booker was the No. 23 overall pick in the 2010 draft, originally drafted by Minnesota before the organization traded his rights to Washington. He spent four seasons with the Wizards before departing to Utah, where he played for two years. The eight-year veteran will turn 32 in November.

Trevor Booker joined China’s Shanxi Brave Dragons back in August, but recently left the team. Now we know why. According to Booker’s agency, Tandem Sports and Entertainment, the veteran power forward is returning to America to undergo a surgical procedure on a foot injury he suffered in China.

“Trevor is extremely disappointed to miss this season with Shanxi,” Booker’s agent Jim Tanner said in a statement. “He is determined to devote all of the rehab and recovery time necessary in order to be in the best shape possible.”

While the announcement doesn’t offer many specifics on Booker’s injury, his agency suggests he’s expected to make a full recovery in time to join an NBA team in the new year. As such, Booker likely won’t be on teams’ radars for the first couple months of the season, but it’s possible we’ll see him on the roster by around the All-Star break. When the veteran first signed with Shanxi, he vowed that he’d be “back on a NBA floor terrorizing people again soon enough.”

Booker, who will turn 31 next month, began the 2017/18 campaign with the Nets but was traded to Philadelphia in the deal that send Jahlil Okafor and Nik Stauskas to Brooklyn. When the Sixers signed Ersan Ilyasova later in the season, Booker became expendable and was released. After clearing waivers, he signed with Indiana and finished the season with the Pacers. For the year, he averaged 6.3 PPG, 4.7 RPG, and 1.2 APG in 68 total games (17.0 MPG) for three teams.

A day after being waived by the Pistons, former first-round pick Chris McCullough appears to have lined up a new professional opportunity.

According to a pair of reports from Emiliano Carchia of Sportando, McCullough is poised to sign with the Shanxi Brave Dragons in China, replacing veteran NBA forward Trevor Booker, who is said to be parting ways with the club.

Booker, who reached a one-year agreement with Shanxi two months ago, reportedly signed a one-year contract worth $2MM plus incentives. It’s not clear why the union between the two sides is coming to such an early end, but if Booker is officially released and receives FIBA clearance, he’ll be a candidate to join an NBA team at some point this season. He’s said to have received interest from the Cavaliers, Heat, and Timberwolves before signing with Shanxi.

As for McCullough, the former Nets and Wizards forward joined the Pistons for training camp, but was released by Detroit on Sunday. The 23-year-old, who was drafted 29th overall in 2015, has appeared in 59 total regular season games for Brooklyn and Washington, averaging 3.3 PPG and 1.9 RPG in 9.0 minutes per contest.

Assuming he finalizes a deal with Shanxi, McCullough will get an opportunity for more playing time in China. He’ll clear waivers on Tuesday if no NBA team places a claim.

The NBA G League’s annual showcase, which typically takes place in January, is expected to happen from December 19-22 in Las Vegas this year, sources tell Adam Johnson of 2 Ways & 10 Days. As Johnson details, the event is typically hosted by a G League team, with the Raptors 905 serving as the host in Mississauga in recent years. However, the showcase will move to a neutral site this year, as the league has outgrown the facilities of most NBAGL cities.

Johnson also notes that G League president Malcolm Turner believes the NBAGL is on track to have 30 teams within the next 12 to 18 months. The league is prepared to enter the 2018/19 season with 27 franchises, as we outlined earlier today. The Pelicans, Nuggets, and Trail Blazers are the only NBA clubs without their own affiliates, but it sounds like Turner expects those teams to get involved in the G League soon.

Trevor Booker To Play In China

Veteran NBA power forward Trevor Booker has announced that he’ll play in China during the 2018/19 season.

“Although I know I belong in the NBA, I’m excited to announce that I’ll be heading to China this upcoming season,” Booker wrote in a tweet. “The summer didn’t pan out as I hoped, but I assure you that I’ll be back on a NBA floor terrorizing people again soon enough.”

While Booker doesn’t name his new team in his announcement, a report over the weekend indicated that he was nearing a deal with the Shanxi Brave Dragons of the Chinese Basketball Association. Alex Kennedy of HoopsHype confirms (via Twitter) that Booker has finalized a one-year contract with Shanxi. It’ll be worth $2MM, plus incentives, per Kennedy.

Because the CBA season ends before the NBA season does, Booker should have the opportunity to return stateside and catch on with an NBA team before the playoffs begin next April. Ty Lawson did something similar this past year, signing with the Wizards at the end of the season after spending the rest of the year with the Shandong Golden Stars in China.

Booker, 30, began the 2017/18 campaign with the Nets but was traded to Philadelphia in the deal that send Jahlil Okafor and Nik Stauskas to Brooklyn. When the Sixers signed Ersan Ilyasova later in the season, Booker became expendable and was released. After clearing waivers, he signed with Indiana and finished the season with the Pacers. For the year, he averaged 6.3 PPG, 4.7 RPG, and 1.2 APG in 68 total games (17.0 MPG) for three teams.

Booker, 30, began the 2017/18 campaign with the Nets but was traded to Philadelphia in the deal that send Jahlil Okafor and Nik Stauskas to Brooklyn. When the Sixers signed Ersan Ilyasova later in the season, Booker became expendable and was released. After clearing waivers, he signed with Indiana and finished the season with the Pacers. For the year, he averaged 6.3 PPG, 4.7 RPG, and 1.2 APG in 68 total games (17.0 MPG).

The Jazz, Pelicans, Timberwolves, Rockets, Knicks, and Spurs were linked to Booker early in free agency, and the Cavaliers were also said to have interest in the veteran forward later in July. However, five weeks into the 2018 free agent period, no NBA deal has materialized for the former first-round pick out of Clemson.

If Booker finalizes a deal with the Shanxi Brave Dragons, he’ll be the latest name on a growing list of NBA veterans who have played for the club. Brandon Jennings, Luis Scola, Stephon Marbury, and Samuel Dalembert are among the players who have spent time with Shanxi.

Booker would also become the third noteworthy – and longtime – NBA big man to make the move to the Chinese Basketball Association this offseason. Al Jefferson and Marreese Speights have reportedly agreed to deals with CBA clubs this summer too.