With Ja Morant sidelined on Monday due to left ankle soreness, Tyus Jones showed why the Grizzlies made him the NBA’s highest-paid backup point guard this past summer, writes Damichael Cole of The Memphis Commercial Appeal. Inserted into the starting lineup, Jones responded by scoring 28 points and dishing out 10 assists en route to an impressive Memphis win over Miami.

While we could quibble over whether Jones is technically the NBA’s highest-paid backup point guard (Russell Westbrook is coming off the bench in Los Angeles while earning more than three times as much), the Grizzlies point guard is perhaps the league’s highest-paid point guard who signed his contract expecting to be a backup — even if he doesn’t think of himself that way.

Morant’s absence and Jones’ promotion gave Grizzlies rookie Kennedy Chandler the rare chance to play a major role off the bench, and he logged a season-high 26 minutes in the win over the Heat. As Evan Barnes of The Memphis Commercial Appeal details, Chandler has taken advantage this season of the opportunity to lean from the two veteran point guards ahead of him on the depth chart, but admits he has had to adjust to not playing regularly.

“It’s hard. It’s the first time I’ve ever dealt with this. My whole entire life I’ve played 30 minutes (a game),” Chandler said. “This is a business, it’s a growing up moment for me to just keep my mind right.”

Grizzlies star point guard Ja Morant is listed as doubtful to play on Saturday vs. Utah due to a non-COVID illness, the team announced (via Twitter). Morant was added to the injury report on Friday night and his status remains unchanged in the latest update.

An illness may be just about the only thing capable of slowing down Morant at this point. The All-NBA guard is off to a terrific start this season, averaging 32.6 points, 6.8 assists, and 4.4 rebounds per game in his first five contests (32.8 MPG), with an outrageous shooting line of .529/.565/.875. If the 4-1 Grizzlies and Morant stay hot, the 23-year-old could emerge as a legitimate MVP candidate this season.

Here’s more out of Memphis:

JULY 6: The Grizzlies have officially re-signed Jones, the team announced today in a press release. 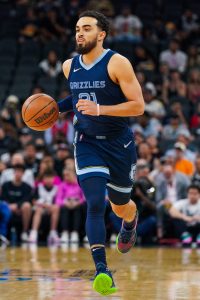 Jones was expected to draw significant interest from teams in need of help at the point this summer, but many of those teams only had the mid-level exception available. Jones’ new deal with the Grizzlies will be worth significantly more than that.

Although he has never been a full-time starter for the Grizzlies, Jones plays an important role alongside Ja Morant and provides the team with a solid insurance policy if Morant, who plays at a breakneck pace, continues to deal with injury issues going forward.

Memphis also traded De’Anthony Melton to Philadelphia earlier in the offseason, which could lead to a slightly expanded role for Jones in 2022/23.

While the Timberwolves are expected to have interest in a reunion with Tyus Jones, the rival team that has been linked most frequently to the Grizzlies‘ free agent point guard is the Wizards, says Jake Fischer of Bleacher Report.

According to Fischer, Jones is believed to be seeking a multiyear deal worth in excess of the non-taxpayer mid-level exception, which projects to come in at $10.35MM.

The Wizards, who are in the market for a starting point guard, will be over the cap, limiting their ability to offer more than the full MLE. However, they could potentially get there if Jones is interested in coming to D.C. and they can figure out a sign-and-trade deal that the Grizzlies would get on board with.

The Wizards used their No. 10 overall pick on Thursday night to land one of the top guards in this year’s draft, selecting Wisconsin’s Johnny Davis. However, the Wizards remain in the market for veteran help at the point guard spot, and Grizzlies free agent Tyus Jones is among the players on their radar, according to Michael Scotto of HoopsHype.

As Scotto explains, Washington should have the flexibility to use the full non-taxpayer mid-level exception and could make a compelling bid for Jones. The club could potentially give him the opportunity to start, which Jones “ideally desires,” writes Scotto.

The Grizzlies hold Jones’ Bird rights, giving them the ability to make a strong offer to retain Jones. Memphis’ decision to trade De’Anthony Melton to Philadelphia perhaps signaled that re-signing Jones will be an offseason priority, though the team did draft a potential backup point guard in Kennedy Chandler on Thursday night.

Chris Fedor of Cleveland.com recently spoke to Michael Scotto about a number of Cavaliers-related topics for the latest edition of the HoopsHype podcast.

Guard Collin Sexton, whose season ended prematurely after suffering a torn meniscus in his left knee just 11 games into the season, will be an interesting player to watch this summer. Sexton will be a restricted free agent once Cleveland tenders him a $7,228,449 qualifying offer. As a restricted free agent, the Cavs will have the ability to match any offer sheet for the 23-year-old, and since he’s coming off an injury and not many teams will have cap space to spend on free agents, a reunion seems likely.

When the Cavs were discussing a rookie scale extension with Sexton’s representatives last summer, the two sides floated a contract similar to the one Bogdan Bogdanovic received from Atlanta, which was four years and $72MM (with a player option in the final season), sources tell Fedor. However, he hears that the Cavs value Sexton in the $15-18MM per year range, while Sexton is seeking something closer to $18-22MM annually.

Although Sexton has undoubtedly been productive on the offense end, averaging 24.3 PPG, 3.1 RPG and 4.4 APG on .475/.371/.815 shooting in 2020/21, Fedor notes that there were questions about Sexton’s fit entering ’21/22, and his injury and the team’s success without him didn’t help his case. Given that he’s a 6’1″ shooting guard and a subpar defender, some teams view the former No. 8 pick as more of a sixth man than a starter, which could hurt his leverage in contract negotiations.

Scotto wonders if the Knicks or Wizards might be interested in Sexton, noting that both teams are looking for guards, but neither team has cap space. As Fedor previously reported, he hears that Cleveland has been curious if the Pistons might pursue Sexton, but sources tell Fedor that the Cavaliers don’t believe any team will end up offering him $20MM+ per season.

Here’s more from Scotto and Fedor:

Although he said it’s not the “end all, be all” for him, Grizzlies point guard Tyus Jones admitted in his end-of-season press conference that he’d like to be a starter, writes Damichael Cole of The Memphis Commercial Appeal.

“You always strive for more, but at the same time with that being said, I’ve always viewed myself as a starter, even coming off the bench,” Jones said. “A lot of times being called one of the best backups in the league, I never called myself that. I always just viewed that I was just a starter that’s coming of the bench. That’s always been my mindset.”

Jones will be an unrestricted free agent this summer and Cole notes that the Grizzlies will be at a disadvantage if Jones prioritizes the opportunity to play a starting role, given that Ja Morant is obviously the team’s long-term starter at point guard.

However, executive VP of basketball operations Zach Kleiman indicated the Grizzlies have interest in re-signing Jones, referring to him as a player who has “always been kind of like a cultural, foundational type piece for the group.” And, for his part, Jones hasn’t signaled that he plans to leave Memphis.

“It’s definitely not going to be an easy decision by any means,” Jones said of his upcoming free agency. “I don’t have my mind made up one way or another.”