The Knicks announced (via Twitter) that they have officially signed first-round picks Kristaps Porzingis and Jerian Grant.  The Knicks selected Porzingis No. 4 overall and selected Grant with their other first-round selection at No. 19. 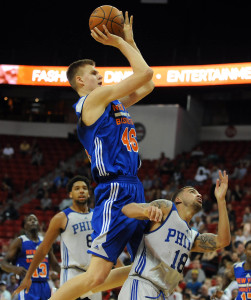 The selection of Porzingis was panned by many Knicks fans who were hoping for a more familiar name, but he has since silenced critics with some impressive performances in Summer League action.  Recently, Knicks GM Steve Mills said that scout Clarence Gaines believed the Knicks should have taken Porzingis first overall if they had won the draft lottery.  The Knicks weren’t ready to go quite that far, but they were happy to have the forward fall to them at No. 4.  Porzingis, who turns 20 on Sunday, was praised by DraftExpress for his fundamentally sound shooting and high-level mobility for a 7-footer.

On draft night, the Knicks shipped Tim Hardaway Jr. to the Hawks to secure the No. 19 pick, which they used to select Grant.  The Notre Dame standout spent five years – including a redshirt season – in South Bend, and has shown tremendous poise for a player his age.  Prior to the draft, I spoke with Grant about why he didn’t declare for the draft earlier and the progress he made as a senior last season.  Grant also told Hoops Rumors that he was hearing he would not slip past No. 22 in the draft and he was proven right in June.

Porzingis is slated to earn $18.65MM over the next four years, according to the 2015 rookie scale.  Grant, meanwhile, will earn $7.568MM over that period of time.