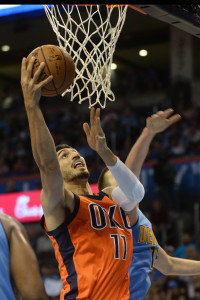 Unable to satisfy those in the organization who believed the Thunder should have at least one title by now, Oklahoma City replaced Scott Brooks with new coach Billy Donovan in a bold offseason move. The decision made sense to critics of Brooks because the team failed to make the playoffs and things seemed rather stagnant offensively. On the other hand, the timing of the coaching change was interesting because many supporters of Brooks pointed to the fact that health was a significant issue last season for the Thunder. Kevin Durant, most notably, missed 55 games and Russell Westbrook was out for 15.

The Thunder returned a talented nucleus and were without a glaring weakness on the roster heading into the offseason, so the coaching change was all about wanting a new leader with a new voice, in my opinion. Perhaps it will be what this team needs. It seemed inevitable for Donovan, who won two titles with Florida and is well-respected by players around the league, to land a job like this one, but his success will likely be measured by how well the Thunder perform in the postseason.

Assuming health doesn’t become a repeat issue for Oklahoma City, the Thunder seem poised for a deep run and should be in the championship mix. Durant and Westbrook still have several years left in their respective primes. Besides making a coaching splash, the Thunder didn’t do much in the offseason because they didn’t have to.

Of significance, however, the Thunder matched the Blazers’ $70MM, four-year offer sheet for then-restricted free agent Enes Kanter. Many fans and columnists asked if Kanter was worth the money and the common opinion was no. The deal nonetheless signaled the Thunder were all in. Kanter, a center who is adept at hitting elbow jumpers, is performing well and is currently averaging 12.2 points and 8.5 rebounds per game. The move was widely expected because Oklahoma City offered Kanter about $62MM, not much less than the max deal he ultimately wound up with, according to Adrian Wojnarowski of Yahoo Sports (on Twitter). While critics pointed out his inconsistent defense, Kanter, 23, excelled after Oklahoma City acquired him from the Jazz. He averaged 15.9 points and 8.9 rebounds per game last season with the Thunder and Jazz. The new deal for Kanter pushed the team far beyond the $84.74MM tax threshold at the time.

To help alleviate some of the financial hit, the Thunder traded Perry Jones III to the Celtics. They made the move with luxury tax savings in mind. It saved the Thunder about $7MM in combined salary and tax payments, according to Royce Young of ESPN.com. Oklahoma City did not acquire much in return (a protected 2018 second-round pick), but shedding Jones’ money was somewhat vital. Still, star power comes with a price and the Thunder currently have a payroll of $97,749,910, second-highest in the league. The Thunder also cut ties with Jeremy Lamb when they dealt him to the Hornets for Luke Ridnour and a conditional 2016 second round pick. The Thunder flipped Ridnour to the Raptors for the rights to draft-and-stash prospect Tomislav Zubcic. Oklahoma City also got to create a trade exception worth $2.75MM.

The Thunder didn’t quite stop at Kanter, though, as far as bringing guys back. Oklahoma City re-signed Kyle Singler to a deal worth nearly $25MM over five years. Singler, a reserve small forward, provides bench depth. Singler, 27, appeared in 26 games for the Thunder last season after being acquired by the Pistons at midseason, averaging 8.7 points, 2.1 rebounds, and 0.7 assists in 17.5 minutes per contest.

The good thing about not making the playoffs last season is that it enabled the Thunder to draft Cameron Payne as the No. 14 overall pick. Payne starred at mid-major Murray State, averaging 20.2 points and six assists per game. His rookie contract did little in terms of having an effect on the Thunder’s financial flexibility because the team was well over $70MM cap anyway. The Thunder make sense for Payne because he won’t be asked to do too much as a rookie, considering all the other talent on the team.

The Thunder had a mostly quiet offseason (aside from the hiring of Donovan and matching the offer for Kanter), but they could have benefited, in my opinion, from acquiring a defensive-minded shooting guard. Even with Donovan, a good defensive coach, guiding the team, the Thunder have still struggled to stop opponents, allowing 103.8 points per game (ninth-worst in the league).

Still, there is no doubt that the Thunder are a title contender if they remain healthy. They are gambling that their coaching change pays off in the postseason. After all, next summer should be far more interesting for an obvious reason: Durant is set to be a free agent. Playing with Westbrook and being on a title contender likely hold a lot of weight when it comes to Durant re-signing next summer, so it behooves the Thunder to have strong season.