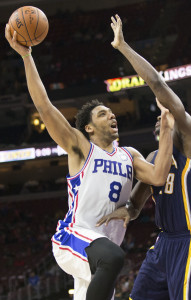 “Two years away from being two years away.” That was ESPN’s Fran Fraschilla’s infamous analysis of Brazilian prospect Bruno Caboclo during the 2014 draft. That’s also an accurate timeline of when the Sixers can reasonably expect to be contenders for the playoffs in the Eastern Conference again. The Sam Hinkie regime envisions putting a perennial championship contender on the floor, and while you can start to see some of the pieces coming together, it’s starting to look like the plan may take longer than initially expected.

The team suffered a major setback in its quest toward a championship when it found out that center Joel Embiid, who was taken No. 3 overall in that same 2014 draft, needed a second surgery on his right foot and would most likely miss the entire 2015/16 campaign. The news didn’t get any better from there. Embiid reportedly put off surgery this summer to party and play basketball in Las Vegas and rumors swirled that the team has been frustrated with his attitude and insubordination. Hinkie apparently expressed his desire for Embiid to be more focused on his rehab, and the center’s diet and conditioning have reportedly worried the team as well. Some of the club’s minority owners are reportedly losing patience with Hinkie, but despite this and the Embiid setback, majority owner Josh Harris remains firmly in Hinkie’s corner.

When you examine Philadelphia’s transactions this summer, you can see why. Hinkie fleeced the Kings for a first-round pick in 2018 and the rights to swap picks in 2016 and 2017 when he acquired Jason Thompson, Carl Landry and 2014 No. 8 overall pick Nik Stauskas. The team then dealt Thompson to the Warriors for Gerald Wallace, who was waived later on in the summer, and snagged a pick swap in the process.

After the trade, Jake Fischer of SI Now reported that the Sixers were looking to move Landry, who is set to make $13MM over the remaining two years of his deal, and that if the team couldn’t find a trade partner, they would look to reach a buyout or waive him outright. Hinkie has since indicated that the team intends to keep him, citing the importance of his veteran voice on the team. The 31-year-old is still recovering from his offseason surgery and is expected to be out until 2016, but when the veteran does return to the court, he’ll be the team’s most experienced player by far.

Stauskas, whose option for the 2016/17 campaign the team picked up last month, has seen court time and the results have varied. During his first two games in Philly, he shot 41.7% from behind the arc, but he has only made just over 26.0% of his 3-pointers since and his player efficiency rating for the year sits lowly at 8.6. Still, he has improved since his dreadful rookie campaign and the coaching staff intends to give him the minutes to allow him to develop. The backcourt mate of “Sauce Castillo” was supposed to be Kendall Marshall, whom the team signed to a four-year, $8MM deal, but the 24-year-old Marshall is still recovering from a knee injury and hasn’t been able to suit up yet. Marshall has shown glimpses of the ability to be a starting-caliber point guard and Hinkie deserves recognition for the move, as the team will be paying somebody who has proven he belongs in the league less than the No.17 overall pick in the 2015 draft is set to earn over the the next four years.

Once he returns, Marshall may not get as many minutes as expected due to the presence of T.J. McConnell. The undrafted point guard out of Arizona has been a pleasant surprise this season and his contract, which will pay him roughly $3.5MM over the next four seasons, looks like one of the best bargains in the league, as Chuck Myron noted in a recent edition of the Hoops Rumors Weekly Mailbag. McConnell has been ravenous on the defensive end, frustrating opposing guards and making the hustle plays that you’d like to see every professional athlete at least go for. He’s averaging 5.1 rebounds, 1.2 steals and 0.4 blocks per game. He’s also dishing out 6.4 assists per contest and making nearly every team second guess its decision not to draft him.

The Sixers had mixed results with their selections in the 2015 draft. Second-rounder Richaun Holmes, who told Zach Links of Hoops Rumors prior to the draft that he thought he had a chance to be a first-rounder, looks like an NBA player, and he has impressed in limited minutes thus far.  The team’s other second-round picks either had their rights traded away or have been waived.

The gem of the Sixers’ draft is Jahlil Okafor. Many of the team’s young players are projects, but this center came preassembled with the footwork of a seasoned veteran and an offensive game that allows him to contribute right away. He’s averaging 17.9 points and 7.7 rebounds per game and although he isn’t a great defender, he’s shown some nice defensive awareness, blocking 1.6 shots per contest. The 19-year-old has legitimate All-Star potential, but a peril with Okafor may be his ceiling. He doesn’t project to be the type of player who will dominate games and single-handedly elevate the team to real contender status, especially if he can’t transform himself into a tenacious rim protector.

The issue with drafting the center, as I discussed in the team’s offseason outlook, is the redundancies on the team, as the only other player who definitively belongs in a playoff contender’s rotation also plays the same position. Nerlens Noel is playing nearly two-thirds of his time this season at the four and he’s been excellent on the defensive end, masterfully denying passing lanes and smothering opposing power forwards inside the paint and on the perimeter. However, the experiment with Noel at the four will come to an end eventually, as he simply doesn’t possess the offensive skills to play the position. Concerns over the fit are prompting the team to ponder a change. Coach Brett Brown is thinking about playing Okafor at the four, but he’s obviously a center long-term, so playing him out of position carries the risk of stunting his growth.

Philadelphia doesn’t have all the answers right now and nearly all the pieces to the championship puzzle aren’t currently on the roster. The hope for the Sixers is that the bounty of draft picks they’ve acquired, along with team’s own lottery selections, will produce at least one true game-changer over the next few seasons. This offseason wasn’t about winning games; the team isn’t there yet. The Sixers still need to acquire that franchise player, and even if they get him, it’ll take a few years to start winning. Anthony Davis didn’t even make the playoffs until his third season. Same with Kevin Durant and LeBron James. Maybe the pingpong balls will land Philly’s way at the end of the season and the team lands a potential star like Ben Simmons. It’s still going to be a few years before the Sixers sniff the playoffs, let alone the finals, and by the time that happens, James’ reign over the Eastern Conference may be over, we will most likely have a new collective bargaining agreement, and the league’s landscape should look dramatically different. Hinkie, Harris and the rest of the club’s management know this and the team is simply remaining flexible with its roster until it’s time to strike.