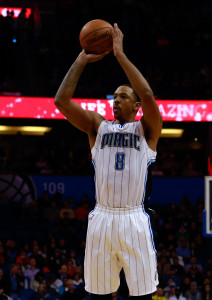 4:52pm: The Cavaliers have acquired Channing Frye and traded Anderson Varejao to the Trail Blazers in a deal that’s officially structured as two separate trades, the Cavs announced via press release. The Blazers and Magic have also formally acknowledged their respective sides of the arrangement. The Cavs sent Varejao and their top-10 protected 2018 first-round pick to the Trail Blazers for their own 2020 second-round pick, which Cleveland had relinquished to Portland in a previous trade. Cleveland then sent it to the Magic, without protection, along with Jared Cunningham, for Frye. The Blazers subsequently waived Varejao, and John Denton of Magic.com confirms an initial report from Marc J. Spears of Yahoo Sports that the Magic will waive Cunningham (Twitter link).

The Cavs hadn’t been optimistic about landing Frye, believing the Clippers would outbid them, notes Jason Lloyd of the Akron Beacon Journal (on Twitter), but L.A. wouldn’t bite on a reported proposal that reportedly involved Lance Stephenson and C.J. Wilcox. The Magic had been trying to trade Frye, according to an earlier report from Marc Stein of ESPN.com, who suggested the effort to find a taker for the 32-year-old would accelerate once the team traded Tobias Harris, Frye’s cousin. Frye has two years and nearly $15.228MM left on his contract after this season.

“Channing Frye is someone we know well. His length, floor spacing ability and locker room presence will impact us positively,” Cavs GM David Griffin said in the team’s statement. “He is a great fit with our group, both on the court and off, and we look forward to Channing, his wife Lauren, and their children, Hendrix and Margaux joining us here in Cleveland.”

The 32-year-old Frye has long been a prototypical floor-stretching big man, nailing 39.7% of his 3-pointers this season and 38.7% for his career. He averaged 17.1 minutes per game this season in Orlando, the second fewest of his career but more than Varejao, who saw 10.0 minutes per game this year in Cleveland, where he’s spent all of his 12 NBA seasons. The longtime confidant of LeBron James, who entered the league the same year Varejao did, saw his playing time slashed to new lows this season as he returned from an injury that prematurely ended last season for him.

“Anderson is a special player, teammate and person,” Griffin said. “Few players have earned the respect, support and admiration of an entire organization, fan base and community as Andy did here. Those are all things that made this a difficult deal to do. At the same time, we have a deep obligation to do whatever we can to reach our ultimate goal and we believe this was a deal that improves our team now and positions us better in the future as well. We thank Andy for his hard work, dedication and contributions to the Cavaliers and our community and wish him and his wife, Marcelle, the very, very best.”

The Cavs reportedly offered Varejao for Frye to the Magic, who were reluctant, but the Cavs insisted that they be able to offload Varejao somehow if they were to come away with Frye, wary of the tax implications of having both on the roster. Thus, the Blazers came into the picture, absorbing Varejao into their ample cap space and turning a second-rounder into a first for their trouble. Varejao has close to $10MM in guaranteed salary for after this season remaining on the extension he signed with the Cavaliers in 2014.

“This was an opportunistic way to use our cap room to acquire a valuable asset,” Blazers GM Neil Olshey said.

The pair of swaps save the Cavaliers an estimated $10MM in combined salary and projected luxury tax penalties, as Dave McMenamin of ESPN.com notes (Twitter link). Frye makes $8,193,029 this season, while Varejao has a $9,638,554 salary that increases slightly thanks to a 5% trade kicker. Cunningham makes the three-year veteran’s minimum salary of $981,348 but only costs $947,276, the equivalent of the two-year veteran’s minimum, to the Magic because he is on a one-year deal. Orlando will be stuck with that figure on its books, though that’s scarcely burdensome, since the subtraction of Frye takes the Magic significantly below the salary cap.

It’s somewhat surprising that Orlando isn’t keeping Cunningham, the 24th overall pick from 2012 whose NBA career was in jeopardy before a strong preseason performance in which he averaged 12.4 points per game allowed him to make Cleveland’s opening-night roster on what was initially a non-guaranteed deal. He forged a close kinship with LeBron. Regardless, neither he nor Varejao will be allowed to rejoin Cleveland this season even if they clear waivers and become free agents.