The Kings plan to fire coach George Karl, according to Marc Stein of ESPN.com. After months of rumors, Stein said sources told him the team has made a decision and the move will be made in the “coming days,” most likely after the team’s final game before the All-Star break, which will be Wednesday in Philadelphia. 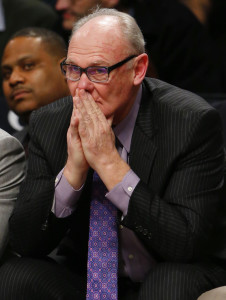 The move verifies a report earlier today by Chris Mannix of The Vertical on Yahoo Sports that the front office has lost faith in Karl and the players have tuned him out. The Kings fell to 21-31 with tonight’s 20-point loss in Cleveland and are currently five games behind the Jazz for the final Western Conference playoff spot.

Stein writes that the decision to replace Karl is being made by GM Vlade Divac, and that former Kings player and current assistant Corliss Williamson is the “overwhelming favorite” to take over as interim coach. Sources tell Stein that Divac only wants an interim coach right now and wants to take his time with the coaching search.

Karl had been under fire even before he was formally hired to coach the Kings a little less than a year ago. Sources told Stein that discontent has been growing lately over Karl’s defensive schemes, his philosophy on practice and his overall leadership.

Point guard Rajon Rondo, who came to Sacramento as a free agent last summer and has been among Karl’s biggest supporters, appeared to jump ship earlier today, complaining about the coach’s decision to make this morning’s shootaround optional, tweets Jason Jones of The Sacramento Bee. “With optional shootarounds, it’s tough … When three or four guys show up for shootaround this morning, how can you expect to win?” Rondo said.

Karl has $6.5MM guaranteed cash left on the four-year, $15MM deal he agreed to last year, not counting this season’s $3.25MM salary. The Kings will be seeking their ninth coach since 2006/07, the most in the league since that time. When the firing becomes official, Karl will be the sixth coach to be let go this season.