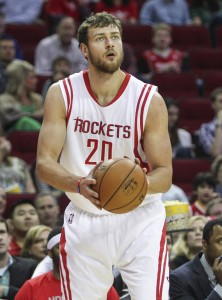 8:43pm: The Pistons acquired Donatas Motiejunas and Marcus Thornton from the Rockets as part of a three-team trade involving the Sixers, the teams all announced. The Rockets received Detroit’s top-eight protected 2016 first-round pick from the Pistons and the rights to draft-and-stash player Chukwudiebere “Chu” Maduabum from the Sixers. Philadelphia gets Joel Anthony from Detroit and Denver’s 2017 second-round pick from Houston. The Sixers are likely to waive Anthony, a league source told John Gonzalez of CSNPhilly.com (Twitter link).

Motiejunas projects to be backup for Tobias Harris, whom the Pistons also recently acquired via trade, while Thornton adds depth on the wing. The Pistons paid a steep price in adding pieces to their rotation, particularly given the lingering back issues that have kept Motiejunas from appearing in a game since the calendar flipped to 2016. Still, Pistons executive/coach Stan Van Gundy has a track record of paying heavily for players he likes, as Marc Stein of ESPN tweets. Van Gundy and company will get to match offers in restricted free agency for Motiejunas this summer, while Thornton is heading to unrestricted free agency at the completion of his one-year deal.

“We’re happy to welcome Donatas and Marcus to the Pistons family,” Pistons GM Jeff Bower said. “We like Donatas’ size, his skill level and his ability to play two frontcourt positions. Marcus adds scoring punch to our bench with his ability to create his own shot and make plays.  We thank Joel Anthony for his professionalism throughout his time here and we wish him the best going forward.”

It’s no surprise to see Motiejunas depart from Houston, as it was a lock that either he or Terrence Jones would leave the Rockets as restricted free agents this summer, Zach Lowe of ESPN.com reported earlier this week. Stein reported earlier in the day that the Pistons had offered Anthony to the Rockets in exchange for Motiejunas, but instead the Rockets end up with a lightly protected first-rounder. The protection covers the top 10 in 2017 and 2018 if it doesn’t convey with top-eight protection this year, an odd wrinkle. The deal also allows the Rockets to create a trade exception worth $2,288,205, Motiejunas’ salary for this season, and another worth $947,276 as a vestige of Thornton. Maduabum, the other asset Houston gained in the deal, was the 56th overall pick in 2011 and plays for Pyrinto Tampere in Finland, well off pro basketball’s beaten path.

Philadelphia’s end of the move has the hallmarks of GM Sam Hinkie rather than chairman of basketball operations Jerry Colangelo. The Sixers score a second-rounder and use their cap space to absorb a veteran player it seems they’d prefer not to keep. They waived JaKarr Sampson to accommodate the move, since they couldn’t trade for Anthony, even if they intended to release him, without first opening a roster spot. Anthony was fresh off re-signing with the Pistons in July on a two-year deal worth $5MM, but only the first season’s $2.5MM salary was guaranteed.

Will Joseph contributed to this post. Adrian Wojnarowski of The Vertical on Yahoo Sports first reported Motiejunas and Thornton were headed to Detroit and that the Pistons were giving up Anthony and the protected 2016 first-rounder (Twitter links). Brian Windhorst of ESPN.com revealed the protection involved with the pick (on Twitter). Wojnarowski later relayed the involvement of the Sixers (Twitter link), while Jonathan Feigen of the Houston Chronicle reported the second-round pick going to Philly (Twitter link). Gonzalez had news of the rights to Maduabum heading to Houston (Twitter links). RealGM provided additional draft pick detail.