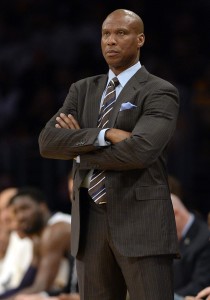 11:18pm: The move is official, the team announced. The Lakers called it a decision not to pick up Scott’s team option for next season. That’s likely a reference to the partial guarantee on next season’s salary that Shelburne alluded to, as the terms are often used interchangeably.

“We would like to thank Byron for his hard work, dedication and loyalty over the last two years, but have decided it is in the best interest of the organization to make a change at this time,” Kupchak said.

10:10pm: The Lakers have fired head coach Byron Scott, reports Adrian Wojnarowski of The Vertical. Scott just completed a 17-65 season and had a 38-126 record in two years on the Lakers’ bench. The move was a joint decision by GM Mitch Kupchak and executive Jim Buss and doesn’t signal a shakeup in the front office, tweets Bill Oram of The Orange County Register. Primary owner Jeanie Buss reportedly an advocate for Scott behind the scenes, but it appears she’s allowed the basketball department to make its own call.

Warriors assistant Luke Walton may be the favorite to land the L.A. job, tweets Eric Pincus of The Los Angeles Times, although he points out that by waiting to fire Scott the Lakers missed out on Tom Thibodeau, whom the Wolves hired Wednesday, and Scott Brooks, who is the new coach of the Wizards (Twitter link). Pincus says the Lakers never would have given Thibodeau the organizational control he wanted (Twitter link), but may have had interest in Brooks for his record in developing young players and his ties to Kevin Durant (Twitter link). Along with Walton, Pincus lists David Blatt, Jeff Van Gundy, Mark Jackson and Kevin Ollie as potential replacements (Twitter link).

Wojnarowski also mentions Walton, Van Gundy and Ollie as possibilities, as well as Spurs assistant Ettore Messina. He adds that the Lakers don’t have a definite replacement in mind, and Kupchak will conduct a search in conjunction with team owners.

Earlier this month, Kupchak refused to commit to another year for Scott and said he planned an informal meeting with the coach to discuss his job status. “It does take time to develop young players,” Kupchak said. “We’ll know in two or three years how effective Byron was as a parent to the young guys on this team.” Scott was initially believed to have one more season of guaranteed money on his contract, with a team option for 2017/18, but Ramona Shelburne explains on ESPN Now that the deal became only partially guaranteed for next season because Scott failed to meet performance incentives.