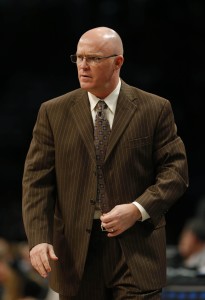 Scott Skiles has stepped down as coach of the Magic, reports Josh Robbins of the Orlando Sentinel (Twitter link). The team confirmed the move via Twitter and a press release.

Skiles has been unhappy for a few months, Robbins hears. (All Twitter links). A disconnect existed between Skiles and GM Rob Hennigan, and they had a few disagreements on personnel and the team’s mindset, Robbins adds. Hennigan and the front office support Elfrid Payton as the point guard of the future and Skiles doesn’t, but that’s just one of multiple issues between the coach and his boss, Robbins says.

The coach blurted out to Hennigan in mid-January that he thought it was a mistake to take the job, but he quickly retracted the statement, as Justin Termine of SiriusXM NBA Radio hears (All Twitter links). The damage was nonetheless done, as Hennigan remained upset, according to Termine. Skiles also told assistant coach Adrian Griffin that he was having second thoughts, and Griffin went to management about it, Termine reports (Twitter link).

The news is nonetheless a shock, coming just one year into his tenure on the team’s bench. Magic players are surprised and haven’t been told the reason why, according to Alex Kennedy of Basketball Insiders (on Twitter). Soon-to-be free agent Evan Fournier profanely expressed his shock in a tweet.

Skiles, 52, is an Indiana native, and the Pacers head coaching job came open a week ago, though it’s unknown at this point if he has interest in that position. He drew praise as the team started 19-13, but the Magic fell off sharply from there, finishing 35-47 and out of the playoffs for fourth straight year. Orlando was 23-29 when it traded Tobias Harris and Channing Frye at the February deadline in future-focused swaps that weakened the roster for the stretch run.

“After much thought and careful consideration, I and I alone, have come to the conclusion that I am not the right head coach for this team,” Skiles in a statement released through the team. “Therefore, effective immediately, I resign my position as head coach of the Orlando Magic. I realize this type of decision can cause much speculation.  The reality though is in the first sentence. It is simple and true. Any other rumors are pure conjecture.”

“I sincerely apologize for any unintended consequences that may adversely affect anyone associated with this decision,” Skiles continued. “The Magic are a world-class organization that employs world-class people.  I wish them nothing but great success. I will always be thankful, especially to the DeVos family, for the opportunity.”

The coach has a reputation for wearing out his welcome in short order, but each of his three previous head coaching stints lasted significantly longer than his time in Orlando. He coached the Suns for parts of three seasons and the Bulls and the Bucks for parts of five seasons apiece. His all-time record is 478-480 in the regular season and 18-24 in the playoffs.

“While we understand it was a challenging season, we reluctantly have accepted Scott’s resignation,” Hennigan said in the team’s statement. “We appreciate Scott instilling a culture of accountability and certainly wish him and his family well.”

His resignation means the Magic are one of five NBA teams on the market for a head coach. The Pacers, Grizzlies, Rockets and Knicks are the others, though interim head coach Kurt Rambis is still working for New York. Orlando interviewed Clippers assistant Mike Woodson and former Warriors head coach Mark Jackson before hiring Skiles last year, as well as Fred Hoiberg, who later took the Bulls head coaching job, Robbins notes.