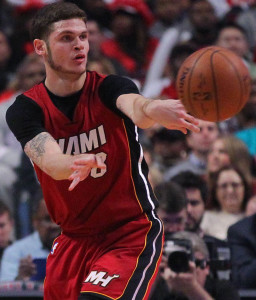 JULY 7TH, 1:20am: Johnson has signed the offer sheet, Wojnarowski tweets. Miami will have three days to match Brooklyn’s offer.

JULY 3RD, 11:18am: The Nets will extend a $50MM offer sheet to Miami restricted free agent guard Tyler Johnson, reports Adrian Wojnarowski of The Vertical. The four-year offer, which Johnson has agreed to sign, has a player option for the final season, tweets TNT’s David Aldridge.

Miami will have three days to decide whether to match the offer once Johnson signs it, which can happen as soon as the moratorium is lifted on Thursday. The deal is heavily backloaded, tweets Miami-based capologist Albert Nahmad, with Johnson receiving $5.628MM in the first season and $5,881,260 in the second, followed by $18,858,765 in season three and $19,631,975 in season four.

The Heat’s decision on Johnson will be heavily influenced by what happens with Kevin Durant, who is meeting with Miami officials today, and Dwyane Wade, who is reportedly talking to other teams after being unhappy with the Heat’s initial offer. If Miami matches Brooklyn’s offer, its cap hit will be equal to Johnson’s yearly salary, Nahmad tweets. If he goes to Brooklyn, the Nets will have a $12.5MM cap hit each year.