OCTOBER 17, 9:58am: The Bulls and Bucks have officially announced the trade in a pair of press releases. Given the difference between Carter-Williams’ salary and Snell’s salary, Milwaukee should also pick up a small trade exception worth $815,199 in the deal. 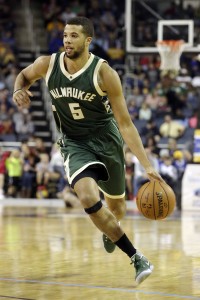 OCTOBER 16, 8:43am: The Bucks will send Michael Carter-Williams to the Bulls in exchange for Tony Snell, Zach Lowe and Marc Stein of ESPN.com report. While it’s not quite a done deal, it is expected to be completed by Monday, Charles F. Garner of the Milwaukee Journal Sentinel tweets.

Milwaukee has been looking to acquire more shooting and defense since Khris Middleton suffered a torn hamstring in training camp, sources tell the pair of ESPN scribes. Milwaukee is interested in Snell both as a fill-in for Middleton and as a potential role player for the future. The team is expected to open contract extension talks with Snell once the deal is consummated, sources tell Brian Windhorst of ESPN.com.

This will be the Bucks’ second trade since the Middleton injury, as they acquired Michael Beasley last month. Snell should see significantly more playing time with his new team than he would have with the Bulls. He was facing competition for playing time in Chicago with Dwyane Wade, Jimmy Butler and Doug McDermott expected to see the majority of minutes on the wing.

The Bulls didn’t have a proven option at the point guard position behind new addition Rajon Rondo. The league’s reigning leader in assists per game signed a two-year deal with the team during the offseason, but only $3MM of his $13.4MM salary is guaranteed next season. Carter-Williams could have an opportunity to take over the starting spot long-term, but in the interim, he’ll provide the team with depth at the position.