Nick Young has turned down his player option with the Lakers for the 2017/18 season, reports Brad Turner of The Los Angeles Times (via Twitter). As a result of the move, Young will become an unrestricted free agent on July 1. 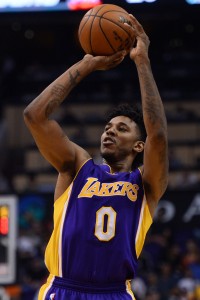 Young’s deal with L.A. included a 2017/18 player option that would have paid him approximately $5.67MM. Heading into the free agent market, he should be able to comfortably top that figure. This year’s group of free agent shooting guards isn’t particularly strong, and Young’s 2.8 three-pointers per game was a top-10 mark in the NBA — that outside shooting ability should be coveted by a number of teams.

Young has talked in the past about how much he enjoys playing in Los Angeles, so it’s possible that he and the Lakers work out a new contract to keep him in the mix. However, the Lakers already have an eye toward their 2018 cap flexibility, and won’t want to add much guaranteed money to their books, since it could compromise their pursuit of impact players next year.

Assuming Young lands elsewhere, adding shooting will be a priority for the Lakers this offseason. Young and D’Angelo Russell, who is headed to Brooklyn, were the team’s top two three-point shooters in 2016/17.