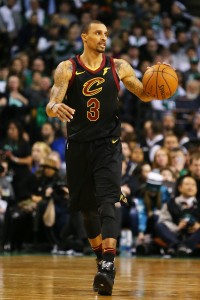 The Cavaliers made a pair of deals at the deadline that added some youth to the NBA’s oldest roster while also addressing the team’s shooting and defense. The move paid dividends on Sunday when the Cavs went up to Boston and took care of business, blowing out the Celtics by 22 points.

Jordan Clarkson was active off the bench, making seven of his 11 shots en route to 17 points. Rodney Hood and Larry Nance Jr. also played key roles off the pine, with Hood racking up 15 points. George Hill started the game and came away with 12 points. All four additions are useful in fantasy, though if I had to pick one, I’d take Clarkson for the rest of the season. He should lead the second unit and get the most volume from here on out.

Let’s take a look at some of the other players who changed addresses at the deadline:

Comments for this post have been closed by the site administrator.