JULY 6, 11:55am: The Jazz have officially re-signed their top free agent priority for the summer, the team announced on its website. Favors has been with Utah longer than anyone else currently on the roster and is the 12th player to reach 500 games for the franchise. The Jazz also finalized deals with Dante Exum and Raul Neto. 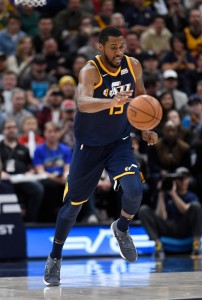 JULY 2, 2:02pm: The Jazz and free agent big man Derrick Favors have reached an agreement on a new contract that will keep Favors in Utah, reports Tony Jones of The Salt Lake Tribune (Twitter links).

League sources tell Jones that the deal will be for two years, while agent Wallace Prather informs Shams Charania of Yahoo Sports (Twitter link) that it’ll be worth $36MM. Michael Scotto of The Athletic adds (via Twitter) that Favors’ earnings over two years could exceed $37MM via incentives.

However, the second year on the agreement will be non-guaranteed, according to Jones (Twitter link). That will allow Utah to retain flexibility for 2019, when several contracts could come of the club’s books.

While Favors probably isn’t an ideal frontcourt partner for Rudy Gobert, given their overlapping skill sets, the duo found a way to make it work last season. Favors also provides the Jazz with rim protection and rebounding at the five when Gobert is on the bench — or when Gobert misses time due to injury, as he did last season.

Favors reached his decision after meeting with the Jazz in Atlanta for a few hours on Sunday. According to Eric Woodyard of The Deseret News (via Twitter), “a couple” other teams were in the mix for the veteran.

With Favors back in the fold, the Jazz – who are focusing on internal growth and development – figure to focus on retaining point guards Dante Exum and Raul Neto. The team will also have decisions to make soon on the non-guaranteed salaries for Jonas Jerebko and Ekpe Udoh, which would become guaranteed next week.