JULY 8, 6:57pm: The Pelicans have officially signed Payton, according to the NBA’s transactions log. With Julius Randle taking up New Orleans’ mid-level exception, the team is expected to use its bi-annual exception on Payton. 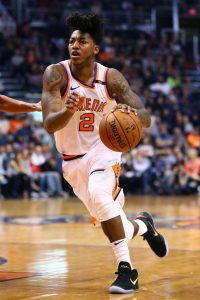 JULY 2, 9:30am: Payton’s one-year deal with the Pelicans will pay him $2.7MM, sources tell ESPN’s Zach Lowe (Twitter link). Scott Kushner of The Advocate (Twitter link) first reported that it would be worth more than the minimum, but less than the bi-annual exception ($3.382MM).

JULY 1, 9:57pm: The Pelicans have reached an agreement on a deal with point guard Elfrid Payton, according to ESPN’s Adrian Wojnarowski (Twitter links), who reports that it’ll be a one-year contract. Payton, who didn’t receive a qualifying offer from the Suns, had been an unrestricted free agent.

Payton, 24, spent the first three and a half seasons of his NBA career in Orlando before being sent to Phoenix in a midseason trade earlier this year. In 19 games with the Suns, the former 10th overall pick averaged 11.8 PPG, 6.2 APG, and 5.3 RPG, numbers that were about in line with his career averages.

While Payton has the ability to fill up the stat sheet on a given night, his shooting and defensive shortcomings have limited his impact throughout his four-year NBA career. During his time in Phoenix, he shot just .435/.200/.685, and the team had a 115.7 defensive rating when he played (108.9 when he sat). He fell out of the Suns’ rotation by the end of the season.

Still, the Pelicans will look to unlock Payton’s full potential, adding him to a backcourt that features Jrue Holiday, E’Twaun Moore, and Frank Jackson. New Orleans also has interest in re-signing free agent point guard Rajon Rondo, and remains hopeful of bringing him back into the fold even after reaching a deal with Payton, tweets Marc Stein of The New York Times.

Payton’s deal with the Pelicans represents a homecoming for the 6’4″ guard, who was born in Gretna, Louisiana and played his college ball at Louisiana-Lafayette.