2:16pm: The Nets and Suns have officially completed their trade, according to a press release issued by the Nets. Dudley, who told Scott Bordow of The Arizona Republic (Twitter link) that he’s not a fan of buyouts, expects to play for Brooklyn. Wojnarowski suggests the Nets may envision Dudley as a stretch four in their lineup. 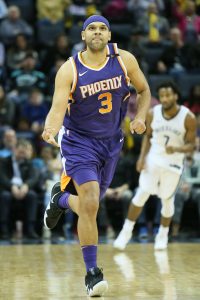 9:16am: The Nets and Suns have agreed to a trade that will send Jared Dudley to Brooklyn and Darrell Arthur to Phoenix, league sources tell ESPN’s Adrian Wojnarowski (Twitter link). The Nets will acquire a top-35 protected 2021 second-round pick in the deal, according to Wojnarowski.

The deal appears to be financially motivated, with Wojnarowski indicating that Arthur and his $7.46MM expiring salary will likely be bought out by the Suns. Dudley, who is on a $9.53MM expiring contract, could have a similar conversation with the Nets, Woj adds.

The savings in the trade are minimal for the Suns, but it’s possible they have another move or two up their sleeves. According to Basketball Insiders’ salary data, Phoenix will have a team salary of $98.63MM after the deal, which is good for $3MM+ in cap room.

According to John Gambadoro of 98.7 Arizona Sports (Twitter link), the Suns had been trying to buy out Dudley for the last couple weeks. Arthur is a little cheaper and it’s possible he’ll be more amenable to a buyout.

As for the Nets, they remain in asset-collection mode after having acquired a pair of draft picks from the Nuggets in a salary-dump deal that included Arthur earlier this month. Today’s move will ensure that Brooklyn once again has a second-round pick in the 2021 draft — the club traded its own ’21 second-rounder in the Dwight Howard deal with Charlotte.