Hoops Rumors is breaking down each type of contract in the NBA to find out which players were the most valuable under each type of deal.

If you missed Part 1 of the “Contract MVPs,” we covered two-way deals, 10-day contracts, and various mid-level and bi-annual exceptions. The rules in Part 2 remain the same: To qualify, a player must have played under that contract during the 2018/19 campaign. Players who see their status change (such as Enes Kanter, who began the season on a max deal but then signed with Portland for the minimum) maintain the same status they began with.

Here are our remaining “Contract MVPs”: 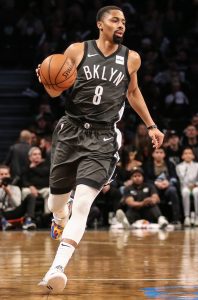 The Nets signed Dinwiddie to a minimum-salary deal back in 2016 and while injuries delayed his breakout, he showcased his offensive ability over the past two seasons. He scored a career-high 16.8 points per game in 2018/19, sporting a 16.8 player efficiency rating in the process.

The combo guard was able to parlay his success into an extension worth $34MM over three years starting in the 2019/20 campaign. It’s a massive raise on this year’s salary, which came in just under $1.66MM.

Towns signed a long-term, maximum-salary extension back in September, but he earned just slightly under $7.9MM this season during the fourth and final year of his rookie deal. You could argue that no player has provided more value on a per-dollar basis than Towns (though Ben Simmons also has a case) and that’s a product of the NBA’s ever-valuable rookie-scale contracts.

Jimmy Butler‘s departure allowed Towns to truly take the lead role in Minnesota. The center finished the season fifth in both VORP and NBA Math’s TPA. He was fourth in player efficiency rating and top-10 in win shares.

The former Kentucky Wildcat put himself in position to make an additional $30MM+ on his $158MM extension by inserting himself into the All-NBA Team conversation. He’ll have more competition for a “contract award” in a new tier next season.

Antetokounmpo was willing to take less than the max during extension negotiations in 2016, since he wanted Milwaukee to have the flexibility to make sound additions around him. The 2018/19 season was a culmination of those efforts, with the Bucks securing the top record in the NBA.

With a deep team that complements him, Antetokounmpo took yet another leap forward. The 2017/18 Most Improved Player led the league in player efficiency rating and in win shares per 48 minutes. The only real stain in his MVP candidacy is his minutes played total (2,358), which ranked 47th in the league (between CJ McCollum and Nicolas Batum). Still, he’s favored to win the league’s award and he gets our MVP for this tier.

These contracts generally exist as a result of a player on a rookie contract hitting restricted free agency. Sometimes it’s a player who was not selected in the first round severely overachieving leading up to the end of his contract. Outside of the rookie-scale extensions, there aren’t many desirable max deals that start at 25% of the cap (reserved for players with 0-6 years of experience).

The 2016 offseason shopping spree littered the market with max contracts of this criteria. Chandler Parsons, Hassan Whiteside, and Harrison Barnes can thank the biggest salary cap spike ever for their status. Different circumstances led Andre Drummond and Otto Porter Jr. to receive their deals, though both contracts are considered player-friendly.

Jokic, Bradley Beal and Kawhi Leonard are the only real contenders for the MVP of this max contract tier. There are arguments for Beal and Leonard, but Jokic’s dominant campaign, in which he finished third in the league in NBA Math’s TPA Metric, gives him the nod.

Harden signed an extension in 2016 before the current CBA went into effect, then inked a new, super-max extension a year later after the players’ union and the league came together to add a provision to the new CBA. The passage grandfathered Harden and Russell Westbrook into the pool of players that were eligible for the Designated Veteran Extension.

Harden’s super-max extension doesn’t kick in until next season where he’ll make $37.8MM. His original extension, which began at 30% of salary cap and will ultimately run for three seasons from 2016/17 through 2018/19, has produced an MVP season sandwiched by two (likely) runner-up campaigns. The Rockets arguably received the most production from any one player regardless of contract type over this three-year stretch.

Had Curry not missed a stretch of 11 games early in the season, perhaps he’s in the NBA’s MVP discussion. Although sharing the court with several other Warriors stars does not help his narrative.

Curry further shifted his offensive load beyond the 3-point line in 2018/19, attempting a career-high 11.7 shots per game from behind the arc. He made 5.1 of those tries (the same amount as his 2015/16 MVP season) and it resulted in the second-highest scoring season of his career (27.3 points per game).

Russell Westbrook, Chris Paul, and LeBron James are the only other players who played on this tier of max contract this past season. Each star had a season deserving of accolades, but Curry was a notch above them this year.

Photos courtesy of USA Today Sports Images. Salary information from Basketball Insiders was used in the creation of this post.