Hoops Rumors is breaking down the 2019 offseason for all 30 NBA teams, revisiting the summer’s free agent signings, trades, draft picks, departures, and more. We’ll evaluate each team’s moves from the last several months and look ahead to what the 2019/20 season holds for all 30 franchises. Today, we’re focusing on the Minnesota Timberwolves.

When Gersson Rosas was hired as the Timberwolves’ new president of basketball operations this spring, there was speculation that it could be a more eventful offseason than expected in Minnesota. After all, Rosas was a longtime lieutenant of Rockets GM Daryl Morey, and Morey has never hesitated to swing for the fences on the trade market. By all accounts, Rosas was prepared to bring that same aggressiveness to his new position.

Fans and observers expecting fireworks were in for a letdown, however, as the Wolves didn’t end up having a wild summer after all. The team’s biggest free agent investment was a three-year deal worth less than $4MM annually for relatively unknown forward Jake Layman. On top of that, high-priced trade candidates like Andrew Wiggins, Jeff Teague, and Gorgui Dieng all stayed put.

Still, the absence of blockbuster moves wasn’t for lack of trying. The Wolves met with D’Angelo Russell at the start of free agency and reportedly believed they had a real chance to land him in a sign-and-trade deal before he pivoted and decided to head to Golden State instead.

Plus, the Wolves’ draft-night deal for Jarrett Culver showed the kind of gamble Rosas is willing to take in the right situation. The team gave up Dario Saric – who was entering a contract year – for the right to move up from No. 11 to No. 6 for Culver, a potential two-way standout on the wing.

While Rosas and Minnesota’s new management group may not have made a huge splash immediately, there will be more opportunities to do so, especially when pricey contracts for Teague and Dieng expire in 2020 and 2021, respectively.

For now, the Wolves will rely on further improvement from young players like Karl-Anthony Towns, Josh Okogie, and Wiggins, along with steady contributions from veterans like Robert Covington and Teague as they look to fight their way back to the playoffs. But if Rosas delivers on his reputation, this roster could look much different within a year or two.

As if often the case for teams with new heads of basketball operations, the Timberwolves didn’t make much of an effort to re-sign their free agents this summer. Veterans like Derrick Rose, Taj Gibson, and Luol Deng were Tom Thibodeau favorites who didn’t fit into the team’s retooling process. While Deng didn’t play much, Gibson was a regular starter and a veteran leader, and Rose enjoyed an impressive bounce-back season in 2018/19.

In addition to Gibson, the Wolves parted ways with two more power forwards, letting Anthony Tolliver walk in free agency and trading Saric to Phoenix. Saric was one of the players acquired by Minnesota in last year’s Jimmy Butler blockbuster, but Rosas apparently didn’t view him as part of the organization’s long-term plans.

Among the other players not in the Wolves’ future plans? Tyus Jones, who had been the team’s primary backup at point guard over the last four years. With Thibodeau and Rose gone and Teague seemingly on the trade block, it looked like Jones might get a chance to take on an increased role, but Minnesota opted not to match the three-year, $26MM+ offer sheet he signed with Memphis.

It was an interesting decision, since the club remains somewhat thin at the point and Jones could theoretically have been a decent trade asset at that price. But Rosas’ group opted to maximize the Wolves’ cap flexibility going forward by not locking themselves into that three-year deal. 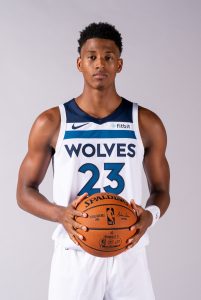 The Timberwolves’ decision to move up five spots to draft Culver reflects how much they like the former Texas Tech standout. While there were rumors that Minnesota was looking to trade up to secure a point guard like Darius Garland and Coby White, Culver is more of a shooting guard or small forward, though he’s capable of guarding a number of positions on the perimeter.

After making just 30.4% of his three-point attempts in his final college season, Culver will have to improve his outside shot to develop into a reliable three-and-D wing, but he’s capable of generating shots for himself and others.

Minnesota’s other offseason additions were primarily role players. In the frontcourt, Layman, Noah Vonleh, and Jordan Bell signed as free agents and should all get the opportunity to earn regular roles. Layman and Bell opened the summer as restricted free agents, but the Warriors pulled Bell’s qualifying offer and the Trail Blazers were willing to sign-and-trade Layman for essentially nothing, clearing the way for Minnesota to add both players without a fight.

At point guard, the Wolves added Shabazz Napier and Tyrone Wallace via trade and waiver claim, respectively. Given the roster crunch in Minnesota, Wallace and his non-guaranteed contract may not end up on the regular season roster, which would put Napier in position to be Teague’s primary backup at the point.

After putting a merciful end to their playoff drought in the spring of 2018, the Timberwolves’ 2018/19 season was doomed from the start by Butler’s trade demand and the lengths he went to make sure the franchise met that demand.

Without Butler on the roster, Minnesota’s ceiling is limited, but there’s still some intriguing talent on this roster. Towns is one of the NBA’s best big men, a healthy Covington would give the Wolves a two-way threat they desperately missed last season, and Wiggins’ upside remains tantalizing if he can ever put it all together.

It may not be enough to make a serious run at a playoff spot, but with Rosas and Ryan Saunders running the show in Minnesota, the attitude in the locker room at least seems to be more positive than it was a year ago. Bigger changes are ahead for the Wolves as Rosas begins to put his stamp on the organization.