12:42pm: The Pacers have made it official, announcing the hire of Bjorkgren in a press release. 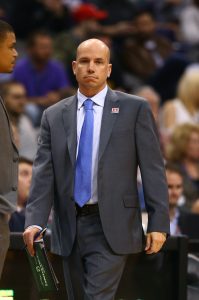 “We are very pleased and excited to have Nate as our new coach,” Pacers president of basketball operations Kevin Pritchard said in a statement. “This was an extensive and thorough search, and when we reached the conclusion, we felt strongly Nate is the right coach for us at the right time. He comes from a winning background, has experienced championship success, is innovative and his communication skills along with his positivity are tremendous. We all look forward to a long, successful partnership in helping the Pacers move forward.”

11:15am: The Pacers are hiring Raptors assistant Nate Bjorkgren as their new head coach, reports Shams Charania of The Athletic (Twitter link).

Bjorkgren got his start as a professional coach in the G League, where he served as an assistant on the Iowa Energy’s staff from 2007-11 under Nick Nurse. Bjorkgren subsequently held multiple head coaching jobs in the NBAGL before being hired by the Suns in 2015 as an assistant. In 2018, he rejoined Nurse as an assistant on Toronto’s staff.

Although Bjorkgren has won G League and NBA championships as an assistant and has been a head coach at the NBAGL level, this will be his first stint as the head coach of an NBA franchise. He’ll replace Nate McMillan, who was let go by the Pacers following the team’s fourth consecutive first-round exit this summer.

Following McMillan’s departure, Pacers management talked about wanting to hire a head coach who takes a “modern approach” to the game and has the ability to communicate with younger players.

According to J. Michael of The Indianapolis Star (Twitter link), Indiana took notice – particularly this summer in the bubble – of the way Nurse and his staff run the Raptors, including their ability to connect with players and give them more one-on-one attention. That’s something the team wanted in its new coach.

During the interview process, Bjorkgren sold the Pacers on his history of “innovation, adaptability and winning,” sources tell ESPN’s Adrian Wojnarowski.

Before choosing Bjorkgren, Indiana put together a lengthy list of candidates for the head coaching vacancy, having reportedly held at least informal discussions with more than 20 contenders.

Chris Finch, Darvin Ham, Dan Craig, Chris Quinn, Mike D’Antoni, Dave Joerger, and Chauncey Billups were among the candidates said to have impressed the Pacers at some point during the process. Joerger has since agreed to join Doc Rivers‘ staff in Philadelphia, while Billups now appears set to join Tyronn Lue‘s staff with the Clippers.

As our head coaching search tracker shows, only three teams – the Rockets, Pelicans, and Thunder – are still seeking new head coaches now that the Pacers have found their man.