NOVEMBER 22: The Grizzlies have officially announced their new deal with Melton, confirming the move in a press release.

NOVEMBER 21: The Grizzlies have agreed to re-sign free agent guard De’Anthony Melton to a four-year contract, according to Shams Charania of The Athletic, who reports (via Twitter) that the deal will be worth $35MM. Melton had been a restricted free agent. 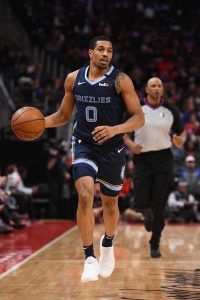 The 46th overall pick in the 2020 draft, Melton earned the minimum salary for the first two years of his NBA career, but will now have a 2020/21 salary comparable to that of Deandre Ayton and Marvin Bagley, the top picks in his draft class, notes Charania (via Twitter). Charania says Melton will earn $9.6MM in year one, suggesting the deal has a declining structure.

The Grizzlies held Early Bird rights on Melton and will be able to re-sign him using those rights, so the deal won’t affect the team’s mid-level exception, which remains available. Melton, meanwhile, will join Ja Morant, Brandon Clarke, and Dillon Brooks as the only Grizzlies players under contract beyond 2022.