NOVEMBER 23: Clarkson is officially back under contract with the Jazz, as the team issued a press release announcing his new deal. 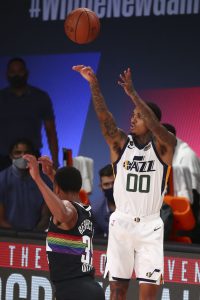 “Jordan was an integral part of our team’s success last season,” executive VP of basketball operations Dennis Lindsey said in a statement. “He’s an aggressive, competitive talent that leads by example and provides a big scoring spark. He is a great fit with our roster and we’re excited to bring him back.”

Utah made Clarkson, one of its top reserves after acquiring the shooting guard from the Cavaliers last season, its top free agent priority. The front office engineered a couple of trades this week to create more cap flexibility. The Jazz reached an agreement to deal Ed Davis to the Knicks and worked out a separate deal that sent Tony Bradley to the Pistons.

Utah struck quickly in free agency. Along with reaching the agreement with Clarkson, the Jazz are bringing back forward Derrick Favors for a second stint by using their mid-level exception.

A prolific scorer, Clarkson averaged 15.6 PPG in 24.7 MPG in 42 regular-season games with the Jazz. He upped that to 16.7 PPG in 28.4 MPG during seven postseason games. Clarkson is a career 34.2% 3-point shooter but improved upon that somewhat last season, draining 36.6% of his attempts with Utah.