4:22pm: The Nuggets have officially announced that they’ve signed Bol to a standard NBA contract. 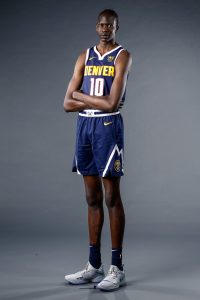 10:32am: The Nuggets and young center Bol Bol have agreed to a two-year deal worth $4.2MM, his agents at CAA Sports tell Shams Charania of The Athletic (Twitter link). Bol, who spent his rookie season in 2019/20 on a two-way contract, will be promoted to Denver’s standard roster as part of the agreement.

Bol, once considered a probable 2019 lottery pick, dropped to No. 44 in last year’s draft due to health concerns. The 21-year-old was limited to seven NBA appearances and eight G League games as a rookie.

However, Bol has flashed intriguing potential as a 7’2″ center who can knock down shots from beyond the arc, and the Nuggets are excited about his development, tweets Charania. In his eight games for the Windy City Bulls last season, he averaged 12.0 PPG, 5.5 RPG, and 2.1 BPG with a .364 3PT% in 19.3 minutes per contest.

Even with Mason Plumlee out of the picture for the Nuggets in 2020/21, Bol will have to compete to earn a regular role in the rotation. Isaiah Hartenstein, Paul Millsap, and Zeke Nnaji are also candidates for minutes at the five behind Nikola Jokic.

Bol will fill the roster spot previously occupied by Keita Bates-Diop, who was waived before his salary for 2020/21 became guaranteed. Mike Singer of The Denver Post previously reported that the Nuggets would promote Bol to the standard roster.

After committing most of its mid-level exception to JaMychal Green, Denver will likely use the remaining portion of that MLE to complete the Bol signing.