NOVEMBER 29: Saric’s agreement with the Suns is now official, the team announced in a press release. 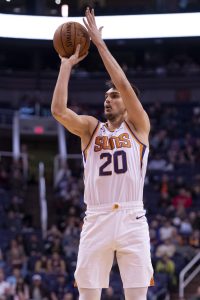 While Frank Kaminsky and Aron Baynes are no longer in the picture for the Suns, the team did reach an agreement to sign Jae Crowder, who figures to see some time at the four as well as the three.

In addition to bringing back Saric and landing Crowder, the Suns also traded for Chris Paul, agreed to re-sign Jevon Carter, struck a deal with E’Twaun Moore, and selected Jalen Smith with the No. 10 pick in the draft. The Suns are looking to build on their 8-0 performance during the NBA’s summer restart and return to the playoffs in 2021.

With Saric off the board, Brandon Ingram and Bogdan Bogdanovic are the only non-two-way restricted free agents whose contract situations have yet to be resolved. Ingram is expected to re-sign with the Pelicans, while Bogdanovic is waiting to see if the Kings will match the offer sheet he signed with Atlanta.