NOVEMBER 27: The Kings have made it official, announcing in a press release that they’ve signed Whiteside. 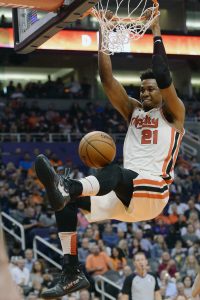 NOVEMBER 25: Center Hassan Whiteside will reunite with his first NBA club. The big man is set to ink a one-year deal with the Kings, according to Adrian Wojnarowski of ESPN. James Ham of NBC Sports Bay Area tweets that the agreement is for a veteran’s minimum. Whiteside is coming off a four-year, $98.4MM maximum contract extension he signed with the Heat in 2016.

The Heat traded Whiteside to Portland in the summer of 2019 to clear cap space for incoming free agent Jimmy Butler. He had a productive year for the Trail Blazers, for whom he started during most of the 2019/20 season as center Jusuf Nurkic used most of the season to rehabilitate from compound fractures to the tibia and fibula of his left leg. In 30 MPG across 67 games with Portland (including 61 starts), Whiteside averaged 15.5 PPG, 13.5 RPG, and a league-leading 2.9 BPG, while shooting 62.1% from the field. Wojnarowski also notes that Whiteside’s 25.07 PER was good for the eighth best such stat in the NBA.

The 6’11” big man out of Marshall was initially drafted by Sacramento with the No. 33 pick in 2010. He spent his first two NBA seasons with the Kings from 2010-2012. Whiteside logged time in the NBA’s then-D League (now the G League) and overseas before Miami took a flyer on him in 2014, where he quickly developed into an athletic force at the next level.